In Europe, Bad means good. Most spas have the prefix of Bad for example Baden Baden in Germany or Bad Regaz in Switzerland, or they may have the suffix like Marienbad.  But my recent trip (Nov 2015) had neither but was superb . 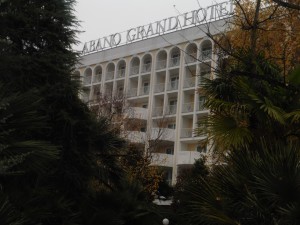 Grand Hotel Thermal Spa and Hotel, in the little town of Abano (AH-ban-oh) Italy, located on the eastern low green hills of Euganei.

In this city with a population of only 20,000 , the thermal waters have made this is one of the largest spa town in  Europe and even is considered the larges spa town in the world, bringing thousands here for unique and efficacious spa programs. It’s also the main economic resource of the area. 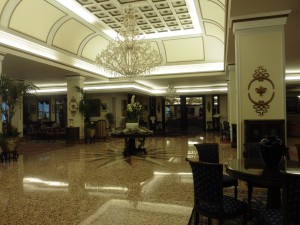 The family- owned five GB Group Hotels which includes the 5 star Grand Hotel and Anti-Aging Thermal Spa, where I stayed, has quite a range  in accommodations, pricing and beyond all, insightful, innovative treatments along with the tried and true session that are expected. 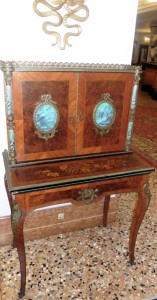 Although this 180 room hotel was built in. 1998, it could easily be mistaken for a hotel from 1898, as the decor is traditional European style. From the grand entrance with carved pillars and the grand Morano glass chandeliers which shimmer on the spotless, inlaid marble flooring covered with oriental  area rugs, to the plethora of  genuine antique furniture and accessories which Mrs. Borile, one of the owners , (the others are her husband, and their three children) ,  has collected over the years and now has the space to display them. I quickly forgot about my penchant for glass, steel and minimalism hotels. I found seeing  the Belle Epoque era and the glory of that time most enticing and welcoming.

Usually there’s a pianist at the connecting bar filling the air from classics to American Song Book, while after dinner there is special evening entertainment. One such event was a fur and jewellery fashion show, well presented on models from Padua. 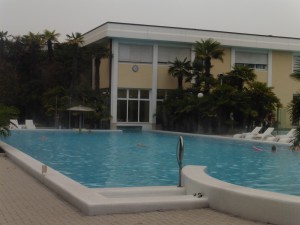 When it comes to the expected spa, there are differences in philosophies between European and North America, but they are getting closer to each other all the time as people travel more and have new spa adventures. European spas have always placed emphasis on wellness with on-site doctors who exam and then present the personal various programs. While North American spas are prepared to pamper their guests. 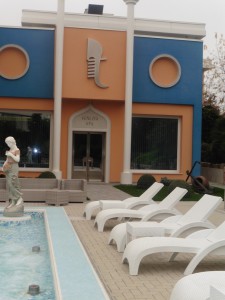 Having tried both sides of the narrowing coin, I have come to respect and want less soft, feathery stroking, oil massages. I have taken a liking for mud  fango treatments.  In fact, the first time I had one was in Israel where I was  heavily layered with treated sterile Dead Sea mud, then wrapped in plastic and covered with a blanket.  I felt like a sushi roll.

While making plans, I let Chiara Borile, director/manager of the five hotels, know that I wanted to try as many treatments as possible each day. The concentration on well being, rebalancing, diet, reducing skin and cellular aging and anti -stress programs, fascinated my non- existent Zen-zone.  The skeptic in me was on full alert.  However, these finely trained, experienced technicians certainly knew their ‘stuff’ and I quickly changed my attitude for this wholesome lifestyle.

Recently, Venezia Spa and Aqua Water Center, was added as an expansion of the Anti-Aging Thermal Spa, and the  decor is the antithesis of the hotel. Here ecru covered pillows placed on the dark sleek rattan chaise longues, with a centrally placed ‘island’ garden surrounded by a glass floor that looks down into one of the the the four thermal pools. 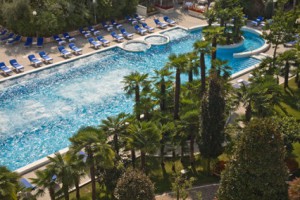 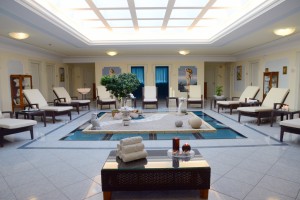 Now that I’ve been to Abano and had many of their treatments over a span of 5 days, I am in love with that heavy dark, hot, thermal mud, which is enriched with minerals,thermal water and algae, then placed in the areas that had been noted to Dr.Maurizio Grassetto,who interviewed me before treatments began. 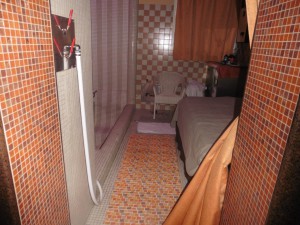 After my consultation with Dr. G., who explained the origin for the mud and thermal property, I suggested that I would like to have a personalized diet plan. 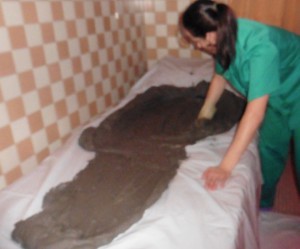 Shortly after my meeting, his assessment was given to the technician who arranged the preparations. Acting on the various painful area, this anti -aging treatment  really had deep reaching effects and as an added bonus, I was told it also strengthens the skin and improves circulation.

After about 15 minutes on the heated anti- aging mud fango, where I had been wrapped and tucked in like a baby, I was hosed off (not my favourite part) and from there, three steps into a  connecting thermal water tub,about 6’ by 4’.  It’s a strange comparison, but I now know how a fetus love the warmth, and slight floating effect that I was experiencing. I could have stayed for hours.  However there is an advisable time limit.

Ah, food, It’s always such an effort to decide to diet or to dine. The selection in Pietro d’Abano Restaurant, with fine  white linens, china dishes and silver flatware, went well with  the white and gold, pillared, ornate dining room. 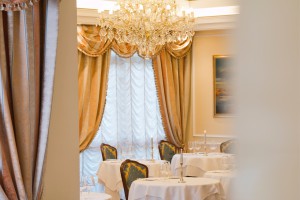 There were  three buffets tables filled with delectable looking hors d’ouvres. No question, it was a hardship to walk passed but I used all my discipline  to stay with my menu.

Afterwards, the waiters, handed  the menus for the sit down dinner segment to the guests. Their repast included  a variety of great Italian food and wine of the area.

My menu was much reduced leaving out all starches and sweets and keeping the main courses to a reasonable size.

At dinner while the other guests dove into their exquisitely prepared meal, I had  a bowl of thinnish soup followed by a plate of  a small, very tender, very tasty, fillet of veal on a bed of braised fennel ending with what became a favourite, a  glass of  fruit or veggie smoothie. 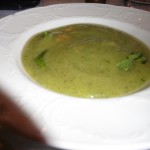 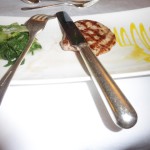 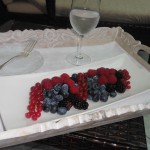 I told Kamil, the wonder waiter, not to tell Dr. G ., but could I get  seconds.  We  immediately had a bond since every evening, he would ask if I wanted  another smoothie.  Admittedly, I did but also lost  over 1.5 kilos on the short stay. 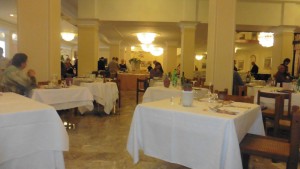 The table given, is your ‘placement’ for the entire time you are a guest. As more and more  travellers are on their own, there’s a wonderful  niche, centrally placed, which seemed like a designated area for singles.

It’s where I met a interesting woman, originally from Romania now a resident of Frankfurt. Later we added a Dutchman who now lives in Nice.  So the conversations were part English, part German, part French….absolutely no Romanian or Dutch.  Also heard was Russian and that was ‘nyet’ for the three of us. 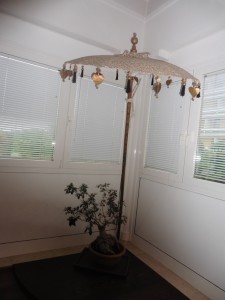 Next day I met Marica, who would take charge of all my treatments and who gave me another but different pampering facial massage to regenerate. The soft exfoliate had jojoba beads, mineral extracts and a thermal water peel had left a very smooth effect.  However, I didn’t know that this also had snail mucin and barley malt extract.  It  worked wonders.

One day was put aside to go to the 3 star GB Group’s, The Metropole, where Oriental experiences are their specialty. Fabio, who had lived and trained in Nepal and Tibet,  These relaxing treatments took time to adjust to. First, there was the unsettling bell and chime ringing session with many sounds of softness and heavy metal vibrated  from head to toe.  However, by the end, I was quite tranquil as though someone had hit me over the head. The sensation was calming and as a new experience, enjoyable. Equally exotic was the Ayurvedic treatment where  a specially created oil was poured over my face, skull and body. This called for an immediate appointment, post treatments with the hairdresser which with  the magic of public relation specialist, Elana. I was able to look quite well groomed at dinner. 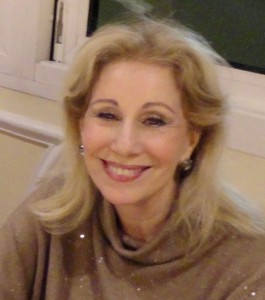 Days went by too quickly and finally I had the 2 hour ritual Belle Epoque luxury treatment which revives and renews skin, a stimulating facial with vegetable collagen and then bathe in the perfumed spa water. A true fin de siecle experience.

And feeling quite sprite,one evening I took a very energetic walk through the small but lovely pedestrian shopping area with large sculptures by  local artists and a huge fountain.

Being somewhat directionally handicapped, I got lost, ( but I get lost in a shoe box) and a woman, older than myself, walked me to the street entrance. I couldn’t keep up with her.  There’s something that the air, water and ambience in Abano and the spa that makes one energetic . Abano Grand Hotel and Thermal Spa will remain unforgetable.