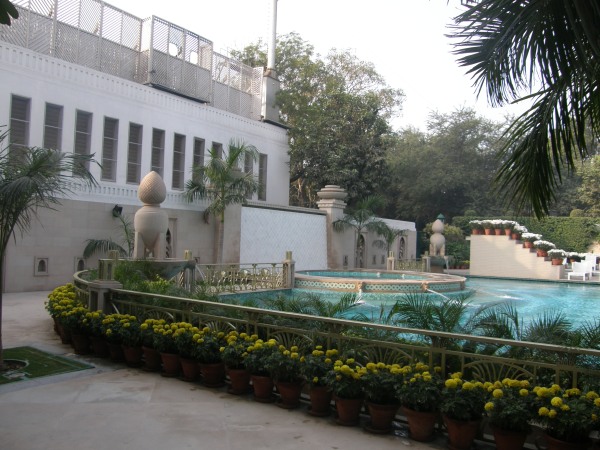 There was a time in Delhi, India, when The Imperial Hotel lived up to its name and was one of the ‘in’ places to stay. The old dowager, built in l932, however, with the passing of time, didn’t keep up appearances and her glittering tiara slid. The hotel became a dreary, tired looking caricature of itself.

Fast forward to l998 and a knight in shining armor bought it and totally renovated this wonderful building. The “new” Imperial. (now called just The Imperial. The word ‘hotel’ was dropped) has WOW power.

From the dusty, traffic filled street, leading to the majestic virginal-white hotel, the original porte cochere still intact, are 29 regal King palm trees. The architectural mix of Colonial and Victorian styles inside and out, are indeed, a throwback to other times when the English governed and the Raj regime made everything look like a fairy tale.

One major accomplishment is that there’s no noise- no non-stop honking of horns. Set back far enough from the busy thoroughfare, The Imperial has what every other hotel in Delhi, envies…. quiet.

All rooms have the original English teak furniture, now redone to their original glory. The new rooms, added during the renovation, have reproductions so well worked, it’s hard to tell that they aren’t from earlier times.

From one of the executive suites, I look down into a white wicker decorated indoor Atrium filled with greenery. Thoughts of the gracious English High Tea rush to mind.
All the rooms have a view, -some with the panorama of the city, others of the hotels sprawling gardens or the Atrium.

These rooms aren’t overly decorated but are subtle and stylish with subdued striped sofas, crisp white linens and oriental carpets over marble floors. The bathrooms are right out of Architectural Digest with sleek marble walls and floors, glassed-in showers, some with extra large tubs and double sinks and numerous amenities. A few of the dressing areas in the larger suites are fitted with drawers for shirts, ties and placements for shoes. Enough space for a Maharajah’s wardrobe.

Again, The Imperial has become somewhat of a legend as is the renowned Spice Route Restaurant filled with superb craftsmanship, carved painted columns and Celedon tableware. The bright Garden Party, where the sun streams in and the air-con keeps me from thinking about the 40c outdoors is where I have a wonderful salad.. For some strange reason, there are a few tourists lunching in the garden. I watch as they dab themselves continually in the sweltering midday heat. The locals chose to be behind the large glass windows.