How strange the world spins. This is really a Tale of Two Cities. 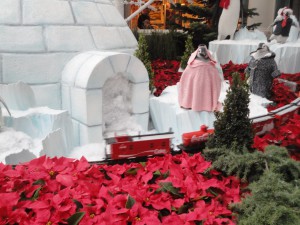 Perhaps it’ because US Thanksgiving was just a week ago,(I’m here Dec 1/15) or perhaps the economy has something to do with the dearth of the crowds, the lack of buzz at the various casinos. The hype in this ‘cool” city has lost its throb…for the time being.

The casinos are, at best, lonely places. But with all the shows including Donny and Marie, Celine, Penn & Teller, I think that entertainment is still going strong-. It’s become a city of entertainment not gaming and the city that once was a desert with a few hotels, now has some of the most inspirational, high end accommodations.  That’s the good news.

The staff at these top notch hotels are almost too charming, knowing that they have to get more rooms sold, keep their jobs, and get more tables at restaurants filled to get high gratuities?.  So what am I doing here.?  I don’t gamble any more since I have lost more than I usually make in a week.  I’m convinced that pay outs are low due to the various world wide money situation.  Okay, change my mind!

There was a day, a time when a travel writing colleague and I went to the slots while we were here for a writers convention and we both hit it big. She made $2000 and I hit the jackpot for $1500.  The slots don’t pay off  as they used to since I did try to recoup at three casinos and never heard a bell ring. 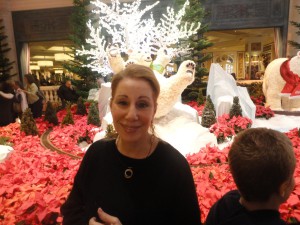 Besides, there are new machines for millenniums not Boomers and I really don’t understand them and the tables for ’21’ and craps, are often  empty and although beckoned to play ’21’, I felt that being the only one standing with the dealer wasn’t my thing.

And then there’s shopping.  There’s no question that this is one of this grand shopping arena cities in North American with all the top labels where a few e.g. Fendi, even having  boutiques  just metres away form each other in the same hotel. That said, the only shoppers carrying many shopping bags from Chanel, Dolce et Gabbana and Dior, to name drop just a few, really high end wares, are the wealthy Orientals and Russians , with the dosh to spend and gamble. However, the latter group may just be spending less in the future due to their tanking ruble.

With the Canadian dollar,  as I write this, being about 29% lower then our friendly US$, there wasn’t  a sales sign in the windows, even though there was Black Friday, post Thanksgiving and pre Christmas. So the US$ is top of the heap and doesn’t seem to have been hurt as much as worldwide retailers .  The bottom line is to go on-line or stay in Canada where you can rack up to 50%.60% and sometimes even 70% off regular priced merchandise, locally. 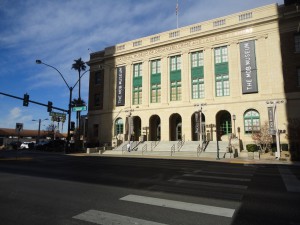 But believe it or not, there are museums to visit. Yup, L.V is ‘think Culture’!  The Mob Museum, a former post office in the older, original part of Las Vegas, is  a wonderfully exhibition about the history of this oasis in this desert.  Others, like the Neon Museum,  show  signs of the culture vulture. Steve Wynn who must be given credit for this unique twist. Hotelier, Steve Wynn, who had the foresight to know that gaming isn’t the only  aspect to draw in people when he built and had installed an incredible art museum in the hotel, Bellagio.  Another aspect was the lobby’s ceiling  filled with astronomically large hand crafted multi-coloured glass flowers by famed international glass sculptor, Dale Chihuly. 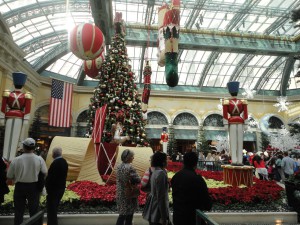 In my opinion, Wynn gave this great glass sculpture a platform that made it possible for the sculptor to become a household name.  Wynn, now owns Wynn and Encore Wynn, two very classy, sophisticated hotels which are strange adjectives for Las Vegas..

As for food on the Strip in the top end hotels, even though some have designer label chefs, it ‘ain’t nothing to email home about’. But one constant is the that portions are huge. Sharing is the smart way to go since the prices like the unnecessary portions, are, well big, often enough for two.  That’s a tip for those who think they could keep to their diet.  Forget shedding pounds/ kilos here, food is everywhere especially sweets.  Like everything, there’s  a plethora of all available edibles.

And what a great segue since shopping has to be tied for first place with gaming.  Other than saying it’s as good as it gets, depending on the deep pockets, there isn’t a fashion designer worth his lurex gold thread that isn’t represented.  An A- one luxury palace to head for is Crystal’s attached to he Aria Hotel, then take the short tram ride to the shopping arcade at Via Bellagio. and also  further down the strip is Wynn’s two hotels. But save an entire day for the shops at The Forum, at Caesar’s Palace is a great pacifier for the shopping addict. And besides, the painted ceiling doesn’t give you a clue whether it’s day or night. 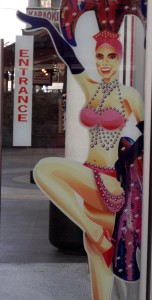 The original Las Vegas where the Golden Nugget was a big success, is being re developed. It’s the antithesist of the fancy, newer Strip. In fact, it was the first laugh I had in days and continue to giggle, with the barely  clad, scanty outfits painted on doors  of shops, and sculpted on various edifices, Then there’s a carved, un -missable, huge cowboy, looking like a true dude,  over a restaurant.  And best, the Fremont Street Experience, now has a boulevard filled with stands selling everything from gaudy rhinestone handbags, scarves, and the expected corny souvenirs. 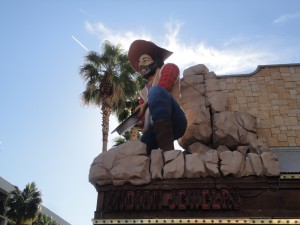 But the real draw is the zipline that flies willing clients, over the entire area and the squeals from these brave ones  who are thrilled to have taken either the lower  or higher line (and the price does the same).

Hands down (perhaps not the best phrase)by far the most interesting, is the exhibitionist male who’s only clothing was a short sleeved bolero and a strategically placed patch of material, really smaller than a g- string, a throw back to the days of the loin cloth that history books talk about, but obviously excite and entice  those women wanting a photo  to be next to him as a memory and paying to do so. 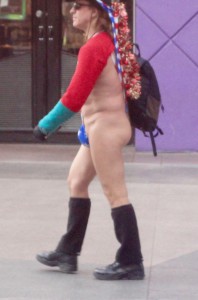 After all, with all the piles of food, he’s one of the fittest, well turned out muscular hunk.  It was certainly the definitive selfie for one very conservative looking woman of a certain age as she shoved some bills into his hand while the other  hand held the ‘selfie stick’.

As to fulfil other hungers, this is the area for any food preferences in and off Fremont Street. Off these well people-packed streets, there are many global food offerings from various countries so the plethora of selection is most tempting.  And a tip, if you want a cab, find a hotel. The ones that do pass are usually taken and there are several others  folks waving madly at any cab even when their lights are off.  But one thing is for sure, the Lights of Fremont Street Experience, never dim.

And just an after thought. Don’t expect the Las Vegas Visitors and Convention Centre to assist with anything.  I want their job as they brush-off the question and pass the query to anyone who happens to know be their assistance who works harder and knows less.

BARBARA KINGSTONE IS AN AWARD WINNING TRAVEL WRITER, ALSO PUBLISHER AND EDITOR OF WWW.MENG08.COM IN CHINESE, BLOGGER ON INSTAGRAM AND TOP TRAVEL MAGAZINE AT WWW.QYER.COM/U/6792880/TRAVLE.