Unfortunately, we only started to talk 20 minutes before our Air Canada flight lands in Barbados. It is a day before Good Friday and Lillius tells me there were two really important superstitions or fact I should know.  On this holy day, Cat wood trees are slashed.  And only on this day does the syrup run red.  “It’s supposed to be the wood that the Crucifix was made from,” she continues as we bumped to a stop.  The second tale is no easier to believe and even Lillius had some reservations.  The white of an egg is put in a glass and whipped lightly then placed in the sun.  When dried if it looks like a steeple, then  marriage is in the wind and if it looks like a sail then the wind will take you off to distant places. 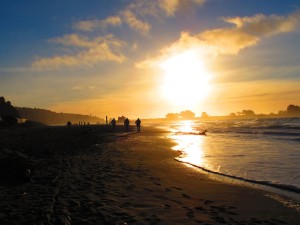 However, sitting on the beach of Christ Church, one of the eleven parishes in Barbados, listening to the waves and watching the day quickly turn into dusk, I can’t think of why anyone would opt for the eggwhite voyage. This island is a piece of paradise.

Since the 60s, Barbados has had strong numbers from Canada and become a popular tourist destination. The proof is in strip malls, motels and a plethora of hotels which have mushroomed. But luckily there are still the relished quiet spots. 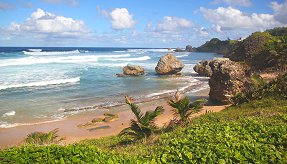 A car ride to Bathsheba features some of the most beautiful beaches and sitting high above is Edgewater Inn, far enough away from busy Bridgetown, the capital, it’s set in a leafy green area where the splash of the waves and the tweeting of the birds seems to be the only intrusions.  TV Soaps have discovered the perfect stretch of sand and shot some segments for The Bold and The Beautiful.

However, if tranquillity is not your choice, the nightly gatherings at the favorite watering hole, St. Lawrence Gap or as the Bajans call it, The Gap, is the place to head for. After a day of lingering in the sand, sun and surf or snorkelling and scuba diving, night time is playtime. The small enclave is filled with bars and restaurants catering to both visitors and locals.  Lights twinkle along the curved road. The scene on the street is more interesting than inside the pubs and diners.

Mini mokes, mini skirts and mini tops are the rage and the music from the various venues, beat out everything from hip-hop, to calypso and reggae.      Emerson, my driver and guide, says his favorite night spot is Pisces.  A native Bajan, who seems to know everyone, Emerson also says that The Ship, next to a large Royal Bank of Canada, is really the most popular. I opt for the latter since the clientele looks as though they’re out of their teens, although I still feel slightly ancient as young women with hair longer than their skirts and body proud young men loll around the bar stools. 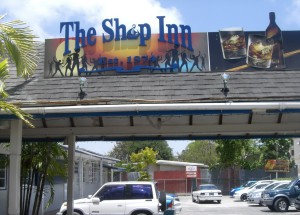 At the Ship, the sign tells its clientele to “Please dress nicely” which I notice, is open to wide interpretation. On a wall are the requisite letters of approval from many heads of state who love the place.  Presidents Carter, Reagan, former British Prime Minister Edward Heath, the Aga Kahn have written their seal of approval now placed on the slightly faded wall.

Sugar, once the number one industry has given way to tourism. Coming up quickly is off-shore banking as is agra-business which tends to make the sugar industry less than sweet. Barbados has a lot to boast about for a country as small. Literacy is 98%, unemployment is about l0% and crime is low and the standard of living is higher than the other Caribbean Islands.

I travelled around the island I was aware that the fields are actively farmed, there is little or no hawking on the beaches or streets and the l00 denominations of the Christian Church co-exist in happy circumstances. 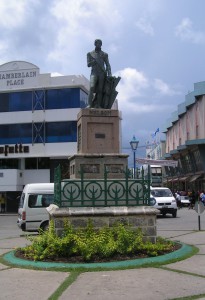 Featured prominently in Bridgetown, in the Parish of St. Michael, is a statue of Admiral Nelson, placed here thirty years before his legendary statute was ever seen in London’s Trafalgar Square. The English still have a great presence even though they gave this island their independence in l966.

The Holders Season, a month long series of music from jazz to opera, is one of the reasons I came in early Spring rather than at the height of the season. Tenor Luciano Pavarotti, who has often stated his love for Barbados and stays at the posh Sandy Lane Hotel for long sojourns, had agreed to give one concert. The man behind the Holders, Lord Beaverbrook’s grandson John Kidd, was born in Canada. His Canadian stay was short but he still keeps his Canadian passport. However, Kidd is every inch of his over 6 feet, a Brit.  Agreeing to an invitation at Holders House for lunch, I was greeted by this lean, very tall, fair skinned and freckled Kidd. Five years ago, he tells me, he brought 7 singers and a piano for a concert in this then cultural desert.  This developed into the annual Holders Season and attendance for dress-up Pavarotti’s concert was 5000. 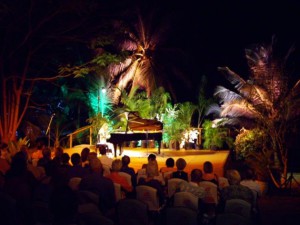 Other tickets were sold to several hundreds who were more casual and stretched out on the grass on the other side of the fence. It apparently was not an easy concert to produce.  Hitches with the humungus equipment, numerous crew, plus orchestra and conductor who were flown in from England, had the rumour mill grinding away about bleeding red. “It has been difficult,” Kidd admits. “The Holders was seen as somewhat elitist, but now everyone really appreciates it,” he tells me trying not to talk about the politics of the concert. The “bum-in-the-seat man” as he is known, sees this somewhat unpredictable extravaganza as a temporary hiccup.  There’s always next year.

This has been a very busy week in Barbados. The test matches of Cricket at Kensington Oval, the national sport, are in progress and it is a tug of skill to pull my driver away from the radio.  While India was ahead, he certainly isn’t keen on talking. “Only a miracle could get us a victory,”  I’m told, sadly. As West Indies pulls ahead, so do we and he becomes chatty pointing out all the landmarks. For the records, West Indies won the match. 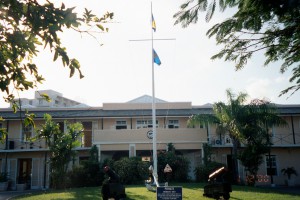 The vestiges of the British presence are still evident everywhere.  The second oldest democracy in the Western world still has it’s British enclaves. The Yacht Club in Bridgetown caters to those with and without water vehicles. From it’s grey exterior flanked by cannons, it boasts of oft used ballroom which has a ‘sprung floor’ and a view of the city and ocean that makes up for the tired looking building.

A rocky route seemed appropriate as we headed to the Highlands. This seemed an apperition. It never occurred to me that this island was anything but flat. I learn there is much geographic variation. From the ocean front where there’s heat and sun, here on the hills the temperature drops several degrees and I think of my sweater back at the hotel. Ten other passengers and I hustle into the open-sided tram pulled by a tractor. I watch in sheer amazement and trepidation as the driver manoeuvres on narrow paths through fields filled with bovine, past Bearded Fig trees and Macaw Pine. Beautiful and very much like it’s namesake in Scotland.

Another hilltop attractive is the haunting Farley Hill National Park. The view is panoramic but most haunting are the ruins of a splendid plantation house. After two fires, it seems the community decided against rebuilding.  This facade makes Withering Heights come alive and could be a perfect setting for a hauntingly beautiful movie.

I tried sourcing out a Cat Wood tree, thinking about Lillius as Good Friday came and went. No one could help but they all knew the myth.  It’s a good one. But then Barbados is what fairy tales are made from.