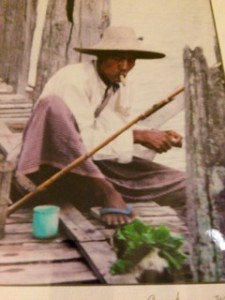 “On the road to Mandalay, where the flyin’fishes play. An’the dawn comes up like thunder outer China ‘crost the bay!”

So wrote poet Rudyard Kipling who spent only forty eight hours in Myanmar (formerly Burma) and from that short stay came the now legendary but erroneous poem –On The Road to Mandalay.

There are no ‘flying fishes’ and to add to this factually incorrect stanza, the dawn does not come up “like thunder outer China crost the Bay”. Nevertheless, these immortal words continue to evoke images of a fascinating country with dramatic landscapes, ancient temples and pagodas, cultivated fields and rice paddies plus a history of wars and sieges. These days, one can’t omit the still obvious political tension and human rights abuses but this is a travel story and tourism does create a new financial flow. Tourism is a great revenue provider and the Civil Government (as this Military Government is called) has made the decision to open their doors, ever so slightly.

Thirty guests, including this scribe, were about to embark on an incredible adventure on a water journey which would take us to seldomly visited jungle villages, meeting the inhabitants who were equally curious about the large white dazzling ship filled with Westerners who, for the first time, suddenly appeared. This would take us 400 km up the Chindwin River.

Road to Mandalay will only travel on the Chindwin River once a year, usually after the rainy season. To operate on the narrower, smaller Chindwin River, a tributary of the Ayerarwady River (formerly Irrawaddy, one of Asia’s great rivers), the river cruiser is dependent on the water level from wet to dry season,- not an issue when it cruises on the Ayeyarwady River. 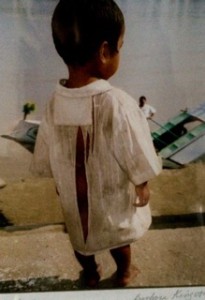 Road to Mandalay, the boat, has also made an exceptional voyage. The German cruise ship built in 1964, was completely renovated for over US$6 million when it was purchased by the Orient Express, then transported to Asia in 1995.

My journey started in Yangon (formerly Rangoon). This throbbing city of 3 million with an easy grid plan has road congested most of the time with all sorts of two, three and four wheel vehicles. The wide, tree line streets dotted with remnants of large but now badly aging Colonial period mansions showed that time had not been kind to them or to their citizens. Moss was growing out of the faded, peeling stucco grand houses. That said, the overall view is of a city of street-vendors selling everything from fruits and jewels to clothing. Note that there wasn’t a tout or beggar in sight among the friendly stall keepers.

The British may have left, but their memories remain. Case in point is The Strand Hotel, so very English Raj, which had deteriorated with rats skulking throughout the space. Now small rooms have been renovated into stylish of-the-period suites detailed with indigenous rare teak wood, ceiling fans cool the air and obliging butlers awaiting your requests.

Although new modern hotels and buildings are creating a fresh skyline, Yangon, nevertheless is stuck in a time warp. But no matter what the updated architecture brings, the most enduring and glittering edifice is the Shwedagon Pagoda which dates back 2,500 years and is the biggest and most important Buddhist shrine in Myanmar. Rumour has it that there is more gold on the dome than bricks under Wall Street. “Beautiful winking wonder”” said Kipling. With nearly 100 metres of a soaring spire, it’s visible from almost everywhere in the city. And happily, instead of climbing the 104 stairs, there’s a newly installed escalator.

To get to Mandalay, it was necessary to take the hour flight on Myanmar Airways International, (somewhat of a joke since there are no international flights yet and the spanking new airport looks more like a lonely monument) 630 kilometres north of Yangon, yet a world apart. Although the population in Mandalay is only 600,000 it is considered the centre of commerce. Since religion and spiritual devotion looms so large in every day life, a most noteworthy monument is the huge Buddha statue carved from a single block of marble.

This intrepid traveller couldn’t wait to venture beyond the cities. We were allowed a close and personal look into the life of graceful people, learning about the country’s legends and complex history, opportunities to visit quiet villages with thatched woven bamboo homes on stilts, ox carts instead of trucks, women with perfect posture holding on to their children while balancing large baskets on their head. 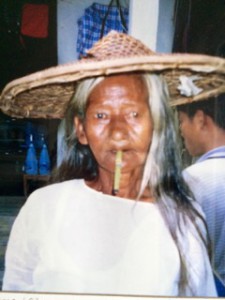 Perhaps the biggest surprise was to be met at each stop by crowds of villagers, waving quietly, who had, in all probability, never seen Westerners or such a large ship. Many of these locations are not accessible by road.

To kick start, we dropped anchor off Maktaw, the most typical jungle village with a population of 2000. It seemed all the villagers were at the shore to welcome us, reserved and shy and dressed in their very best outfits.

Most mornings after breakfast on the Top Deck near the pool, we would disembark for another destination. As with all our stops, a transfer vessel took us the shoreline. Monywa, a big trade city for peas, beans and peanuts, is renowned for Thanboddhay Temple, with over 580,000 ornate Buddha images. At Kani, Nat dancers (spirits who embody people) performed gracefully by elderly women in wonderfully colourful robes although it’s usually danced by transvestites.

After our morning’s excursion, each lunch on the ship was another East Asian feast- Burmese, Vietnamese, Thai Indian etc.

The second of the eight days, I soon realized there was a reason why both local men and women were wearing ‘longyi’ – long airy, cotton wrapped skirts-. With the blazing sun and jungle humidity, the longyi was a cooling and breezy revelation which every woman on board soon adopted. The men didn’t even consider this alternative. 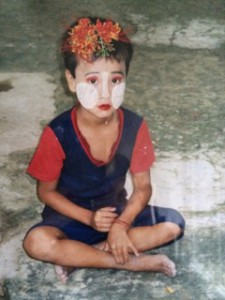 Another custom was the use of an ecru coloured paste applied to the face and body. Thanaka, made from the bark of a small tree, and then beaten on a rock, some water added, and turned into goo. It acts as a sun screen, firming and cooling cream with many benefits women search for at any price. Here it cost pennies.

After dinner, (no menu was ever repeated) this floating base featured lectures in the wicker filled Observation Lounge where we learned about numerous hill tribes, white elephants, watched intricate hand puppetry and Chin dancers. Political discussions were taboo.

For anyone who suffers from seasickness, the Chindwin River is as smooth as the skin of the Thanaka wearing natives.

As we continued, the villages became larger. Mingin with an exquisite 250 year old completely teak wood temple, was bustling as the village prepared for a funeral, draping a large white canopy and side panels over the coffin while in contrast Maukkadaw, is a wealthy large teak wood centre. Then there was Kalewa, less than 60 Km from the Indian border and Kalya, a unique town of 90% Christian population in a country where over 80% are Buddhists. Even though the two latter towns were only 45 Km from each other, it was a bus trip from hell, the only glitch on the trip. This unique vehicle had hard, extremely elevated seats, too high for one’s feet to touch the floor and nowhere to put them as we giddily bumped along the pitted road leaving us with wobbly legs. Back on board there was a rush to the spa for a Burmese massage. It was on this ‘leg’ of the trip that the police were most obvious, even joining us on the bus, rifles in sight. Why? To protect us, I was told. From what, I wondered. The easy answer given was that some money usually changes hands.

The most poignant and memorable day for most of us, was in Kindat where over 500 uniformed school children of various ages and stages, (there are only 17 teachers) sang the anthem and pledged allegiance to their country, before being presented with hundreds of dollars worth of school supplies donated by Road to Mandalay’s School Fund.

The countless times we removed our shoes before entering the dozens of temples and pagodas still didn’t deter any of the thirty guests. We all realized we were privileged to be able to visit these monuments.

The big finale was hard to top or describe properly. Think of a small arid plain studded with an orgy of thousands of temples and pagodas. The amazing sight of towering temples and pagodas of every shape and size is one of the wonders of the world. There were originally 5000 but now there are about 2000 in the archeological zone of Bagan (formerly Pagan). Bagan was founded in 1058 and boasts of a most beautiful golden pagoda, the Ananda Temple deserving all the accolades and superlatives. For those who climbed to mid level (some of us made it through the narrow tunnel to the top), we were congratulated with a surprise champagne reception catered and served by the ship’s staff. And just in time to toast the sun setting on the golden stupa of the amazing Ananda and to a memorable cruise in a country that in time should become one of the great destinations. Who cares if the dawn doesn’t come up ‘outer China ‘crost the bay?’