India changes people, I was once told by a friend from India. Even though I had been to the subcontinent several times before, there’s one word that describes what I learned on this trip- patience.
Train travel has always excited me and even though I had been to Darjeeling I had never made time to travel on the World Heritage Listed – Toy Train. This time my itinerary included the small important trade centre and bustling city, Siliguri, where I started my train travel at New Jalpaiguri station.

From here I was headed up to the Himalayas ending at Darjeeling with a few short stops along the way for tea and nibbles.

The Darjeeling Himalayan Railway, with a narrow two feel rail gauge, started in 1878 in the Northern Bengal State – the route from Kolkata (then Calcutta) to Darjeeling. The width of the carriages is over 3 times that of the rail gauge. When this unique means of transportation started it was for those who had the time and money to undertake this formidable journey away from the unbearable heat of the big cities to the cooler climes in the Himalayas. On this trip, instead of the original steam engine which still exists, it was a diesel engine which ascended the various terrains.

Patience played a huge role. When I arrived at the platform at New Jalpaiguri, I was to be met by an official who was to have the precious train ticket. Not only wasn’t there my pre- arranged first class ticket but in fact, no ticket had been booked, nor had they ever heard about my arrival which meant I didn’t have a seat on this small, five coach train. With The Darjeeling Toy Train being the narrowest of the regular narrow gauge trains, there isn’t the flexibility to even squeeze in an extra person. So seating became a wait and see situation. Patience

Being school break, families look forward to the coolness of the various hill stations and also an occasion to show and explore the continuous changing scenery in this hilly and stunning territory. 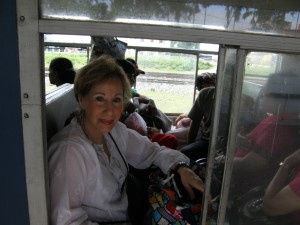 Only after the train arrived where there was a head count, did I get the only available seat in the entire train in second class section. So with the largest piece of luggage of any other passenger, (after all, I was going to be in India and Bhutan for three weeks), I was helped onto this 24 seat tiny car by a most obliging man.

Cozy is the first word that can describe the crush. And even with the little space, there seemed to be continuous movement among my co-journey people as they changed seats, walked up and down the very narrow and short aisle, chattered in loud voices on cell phones in various dialects and even sang along to the tunes on their ipods, all so unexpected in this quaint space.

Although the trip isn’t that long , approximately 90 km (about 54 miles), the train dating back over a hundred years doesn’t seem to have changed too much and still takes about 8 hours to reach the Darjeeling destination. Except for the diesel engine, the constant blasts of train hoots is still in this delightful time warp. I waited and wondered if that annhilalating noise would soon stop but I finally realized that it was part of the ‘charm’ and character and one just has to get used to the hoots, hence the very loud conversations. 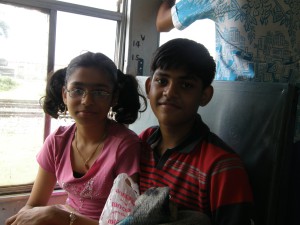 My window seat was next to one member of a family of five – two others in the facing seats and the last members across the very narrow aisle. All were taking their vacation. They were chatty and friendly, wanted to know about Canada and how was it that I was traveling alone. They all spoke impeccable English. I liked them and their intelligent teenage children, one wanted to be a doctor, the other a lawyer. They were from Chennai (formerly Madras) and were headed to one of the hotels in Darjeeling. They offered me cake and crackers, I offered whatever I had in my bag.

At the next stop, Sukhna, where there’s a wild elephant and leopard game sanctuary with occasional sightings tigers and a strutting peacocks, a first class seat became available and the white clad steward rushed to tell me I could change my seat. I didn’t. Firstly, I thought it would be an insult to this fine family and secondly, it was enjoyable being with the locals.

Although I never did find out the difference, I would think the seats were probably more bum -friendly. Originally, the journey took about 5 to 6 days and could not have been very comfortable but obviously worth the exhausting trip in comparison to the extreme heat and humidity of the major cities they were leaving

The pace was slower than I could have imagined. What I hadn’t expected was that the train crawled at about 10 km per hour, as it hugged and clung to the side of the highway and deepening valleys. Snapping photos of the ever changing scene became my past time and even while in motion the photos actually came out clearly since the lack of speed allowed for it

At times I could actually grasp some of the branches that came into the open window. (that was the air/con). And as we started climbing we were so close to the edge of the precipice, I decided not to concentrate on the now very deep gorge below but to keep my conversation going with my seatmates.

The complex curves and loops were both dazzling and frightening, the tortuous route unchanged since its conception as the coaches crisscrossed the various public highways while cars stopped, without the aid of gates or sirens, to let us pass

Car travel is much faster but so much is gained by this extraordinary experience. So side by side with the various highway vehicles, mainly colourfully painted Indian made Tata trucks with signs in the back that said ‘please honk’, we wended our way upwards.. Horn honking, a congenital condition in all of India and this continued along with the train’s hoots which became part of the charm of this country of over 1 billion who have become accustomed to noise and confusion. From the avocado and green tea estates, the terraced rice fields where women were planting for the next season to the thick very green forests and viewing of the occasional hare or jungle fowl, tigers, we crept higher and higher.

As these doll house carriages chugged up the mountains, my concern was that this seemingly fragile train would tip. However, the exhilarating and constantly changing foliage, from thick forest to the exotic wild foliage, took my mind off the various unscheduled stops due to to the need to change or alter the tracks. Rangtan, Choonbutty, Tindharia, Gayabari, Mahanadi, Durseong, Tung, Sonada, Ghum and Darjeeling were the scheduled station stops

There was one much unexpected major jolt nearby Gayabari, just a stop before my meeting place in Kurseong, 5000 feet above sea level. A wheel had fallen off and in the most difficult of locations, next to a small cliff. We were told it would take 2 to 3 hours which translates into 4 hours when in India, to fix this part. A soft rain had started and I had already been on the train for 5 hours. Patience and swift action brought me to the conclusion that I had to get off the train, find a van cum taxi to get to my meeting place. With already 11 people squeezed into a normal size van, I pleaded and sat in the front seat with three others, certainly an unlawful amount but who was counting! As a young man struggled with my luggage up the so called steps and placed it on the already laden roof. I knew I was lucky to get this squished seat. Within a half hour, considering there was rain and a very dense fog, I was at the Kurseong station where I was met by one of the drivers from the Heritage Listed Windamere Hotel on Observatory Hill in Darjeeling. The evening’s chill was settling settled in and a prepared blanket was folded over my lap for the 30 minute trip along with a bag filled with edible goodies for the rest of the trip to Darjeeling, ( 7500 feet above sea level)..

We arrived at this stunning hilltop aerie as darkness was settling in. The hotel gateman saluted my arrival as several staff members were there to assist and take me to my grand suite.

My trip on the Toy Train had ended unexpectedly prematurely but it gave me the taste and adventure that I had yearned for. Nothing is easy in India and again patience won out. Railway buffs should consider this trip as a reminder of a style long gone. One would suspect that by now these coaches would be in a museum but the Toy Train is the stuff of which railway legends are made and happily with all its glitches, the Toy Train is still a fine experience.

Happily settled in my suite( Chogyal of Sikkim #9), at Windamere Hotel and a muscles relaxing spa appointment booked, I lay back and realized that this had been one of my best adventures and an opportunity to meet the kind people of India, see the extraordinary ever-changing scenery and be patient.

The irony of this shortened journey, is that Windamere Hotel’s proprietor, Sherab Tenduf, also happens to be the man that saved the Toy Train from being auctioned off and on the hotel’s grounds there is a building with two meeting rooms filled with books dedicated to train lovers.