Home
Asia
Bhubaneswar is the sort of city you expect to find in India- a developing, progressive city that doesn’t forget its past and does it efficiently.  The capitol of the state of Orissa and a city of temples set against the background of high sandstone spires, with a population of 800,000 doesn’t have the hordes of people the larger cities have but ‘traffic cops’ –the cows still have the run of the roads. There are the usual small stalls selling everything from clothing to fruit. I take a walk the first evening I arrive and pass a doctor’s sidewalk walk-in clinic with a long line of ailing people. There are small restaurants, jewellery shops feature filigree silver work, a specialty of the area.  I quickly learn that telephoning internationally is a major problem and the cables in my hotel are “shot”, I’m told.  But the good news is there are small booths throughout the country, (really small about 3 by 4 feet), where you can call out and even fax.  However, if you want privacy, forget it.  The people who run the stalls love to listen in and my presence attract a few more passerby who seemed to enjoy my conversation with my husband in Canada. The cacophony of the traffic noise is overwhelming since the drivers are “horn leaners”.  I lose most of the conversation.  Seeing my frustration,, the booth’s employee closes the door but the air is quickly absorbed so it becomes a no-win situation.  The good news is that it really is inexpensive, costing only about 46 rupees (approximately CDN $2) for about a three-minute call. 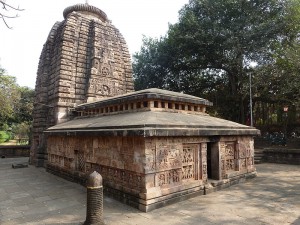 Bhubaneswar may not be the centre of the world but when it comes to temples it’s one of the most populated areas and part of what has become known as the Golden Triangle for temples.. Annually, this attracts tens of  thousands of tourists, both Indian and Westerners.  Orissa, once a state with over 7000 temples, has seen their wealth of temples dwindle to a mere 200 in reasonable condition which dot the area but only a dozen worth visiting.  My guide Mr. Rath, a devoutly religious man, decides that my first stop should be Laxmaneswar followed by a hasty visit to Bharateswar and Satnghneswar, the three oldest temples in Orissa. We don’t go to  Rameswar, the baby, being only 600 years old.  However, the piece de resistance is Lingaraj Temple, in a class of its own is considered the purest example of a Hindu temple..  The morning, Rath tells me, is the best time since the heat hasn’t yet reached its peak by noon it was 40c) and the worshippers and sightseers aren’t yet here.  We pass the plethora of souvenir stands, which seem endemic at every temple site.  Since Lingaraj  is off limits to non-Hindus, we climb to a rooftop platform and look down on the intricately carved tower and temple dedicated to Tribhuvaneswar, the Lord of the Three Worlds.  This dates back to the 11th century and is ornately elaborately carved  -“a perfection of harmony”. Within the complex are another 45 smaller temples.  The usual architecture includes four buildings – Sanctum Sanctorum, the Audience Hall, the Dancing hall and the Offering Hall, all visible from my vantage point.  Finished with our visit to the l80 foot temple, we head for the stairs where we encounter two cows feasting on a pile of garbage, which we walk past.  India is a series of colors and odors.
Our next stop was to the 7th century Parsurameswar, one of the oldest surviving temples and in incredibly fine condition with interesting animal bas-reliefs, which are filled with liveliness.  It is acknowledged to be the symbol of all that is chaste in sculpture.   Worshipping still goes on here as opposed to the many where there is an admission charge and is not considered a “living temple”. The7th or 8th century Muktesvara Temple,- one of the earliest – set in a garden-like atmosphere, is noted for the carved colorful arched torana, which is a Buddhist influence.  “God fearing and god loving, that’s what we are,” Rath tells me about the Oriyas.  We try to beat the heat and race off to the relatively small 11th century Rajarani, not a living temple and for only 2 rupees you can see the beautifully carved 9 planets over the entrance..  Hidden among the carvings are sensuous female sculptures. Suddenly, seemingly from out of nowhere, a man appeared with a book showing the donations that previous tourists had made.  Rath tells me how much to give but also warns that many of the inclusions in the book have had an extra zero added which made me feel considerably better with my adequate donation.  Before driving to Puri, only 12 km from Bhubaneswar is Dhauli, and again considered one of the oldest monuments in Orissa.  It’s here that King Ashoka carved his famous edits on a five by three metre rock, which is stalls very legible and cleverly is guarded behind an iron gate.  Nobody is around and it’s a good time to look over the 13 inscriptions, which have been blown up and set in panel style.  Numbers11, 12 and 13 have been edited out but I can’t get a reason why.
With still some energy left, we climbed to the top of the rock so that I can see Elephant Head, claimed to be the oldest monument in Orissa.  Again there isn’t anyone nearby.  But up the hill is the white wedding- cake looking white and gold building, Dhauli Peace Pagoda. Built in l972 by the Japanese, it’s here the crowds have gathered. Against the blue sky, there is something very ethereal about the building. The newness for me certainly doesn’t have the appeal of the antiquities. 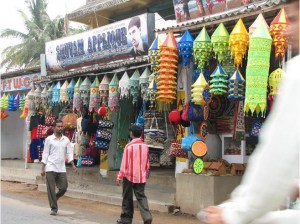 As the heat settles in, on our way to the coastal city of  Puri, we take a small break at Pipli, a shopping area where stall after stall is selling mirrored umbrellas, lanterns, handbags with the sameness of merchandise at each retailer.  The only difference is the price. As we continue, orchards of cashew nut trees flank the roadside. Along the way, we stop for a green coconut drink where the head is chopped off with such great certainty. After we sipped the sweet and refreshing warm liquid, the nut is chopped open, the meat scooped out and served on half the coconut shell and the vendor has made a small spoon out of the shell.  I can’t  say  no to Mr. Rath’s suggestion that we stop at the Handicraft Museum in small village of Batagan near  of Puri.  The shop is filled with woodcarving, miniature paintings and textiles, Since it’s also a training centre for the arts, I speak with the few dozen students through Rath’s translation.  The object of the government is to teach these young people a trade that will be useful.  It was worth the stop, mainly because the tortuous, narrow, often semi-paved roads had made me quite nauseous. The small, clay, thatched roof huts are a sad comment on the housing I see during the trip. Finally, we reached the former port city Puri and what a welcoming sight with the expansive beach and the ocean.  But that isn’t the reason for the crowds.  It’s Jagannath Temple, Lord of the Universe dedicated to Vishnu.  “Here the past is never forgotten,” Mr. Rath tells me. Abut the temple that is bigger than the one in Bhubaneswar.. Since it isn’t opened to non-Hindus, for a small tip we are admitted to the roof of the Raghunandam Library to view its grandness.  It is 214 feet high and is located at the end of the wide, bazaar like boulevard, Grand Road.  Jatannaath  Temple has the largest kitchen in the world feeding l00,000 people each day, cooked up by 600 chefs who use only wood fire.  Over 25,000 take the food inside the temple grounds, while the rest is sold on the streets or given to the multitudes of beggars.
Finally, I reached the beach for much sought after walk and see why it’s hailed as one of the most beautiful sea coasts.  It’s clean but that may be due to the annual Puri Beach Festival, which starts this evening.  I attend and the speeches go on for a long time with all 14 speakers telling of the potential of this destination.  There are wonderful dancers from various states, all interpreting the movements that have been around for thousands of year. Puri is indeed, a great place to visit. 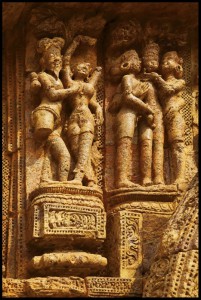 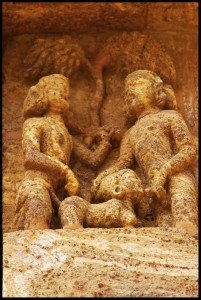 The coup de grace of the Golden Triangle of temples is at Konark often described as “an allegory in stone”..  It’s on the deserted coast among sand dunes, 64 km from Bhubaneswar and 33 km from Puri.  With the traffic and curvy roads, it takes over one hour.  Again there are the vendors and souvenir stands but the site is purely for the Temple of the Sun built during the 13th century although still huge, it’s only half the main temple that remains of the former glory.  What is remarkable is that without too much care talking, this monument built by an Orissan king as a victory war memorial is in great condition and the carvings are very visible.  Pushing through the groups of school children and tourists,  that fine carving covers every inch that I see, including the 24 gigantic carved wheels around the base and seven muscular horses.  Nowadays, if Konark is known for anything, it’s the erotic carvings.  These images are smaller at the bottom and looking upwards, mostly hidden from view, are life size figures in various sexual poses, which are most explicit and totally remarkable.
Even for those not involved in any of the religions, The Golden Triangle, is worthy of a trip to see the greatness of the temples, their ancient carvings and sheer majesty of size.