Friends, and even mere acquaintances always ask why I enjoy traveling as queues get longer, tempers shorter.  In brief I always seem to find adventure, see new cultures, meet interesting and admittedly boring people and most of the time, land in the most delicious places on the face of the earth. 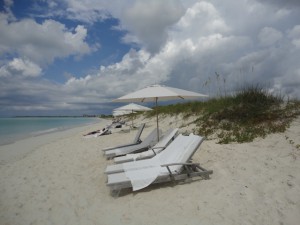 My seat mate from Miami to Turks & Caicos, (certainly on the top of my ‘bucket list’) was a blond, make-up free young woman who casually told me that she loves deep sea diving so she gave up a corporate job to start a business.  But prior to that Kamilla, also became a nutritionist.  I learned so much about various grains which should be ground into a powder if it is to make you healthy, hair and skin shine and keep the agility of both the body and the mind.  We said our  farewells with promises to stay in  touch.

Not that I’m fickle but my mind  quickly went to my destination…COMO Group of Hotels’ Parrot Cay located off the large island of Turks & Caicos. After a 15 minuted drive to a small harbour, then onto a motorized yacht for 35 minutes over the most beautiful, sometimes shallow and so clear you could see the marine life, not another boat in sight, suddenly, there the vista changed and there were a few isolated houses with beaches and then more cottages and quickly we slowed down and docked.

Waiting was a golf buggy which for 6-7 minutes drove on the paved narrow roadway and like a mirage, was a white building with a  brilliantly colored terra cotta roof.  It was love at first sight. 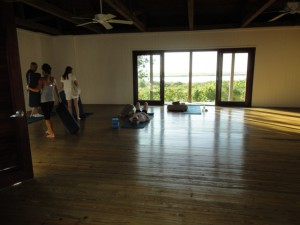 Being alone,  among many romantically inclined young couples had me slightly worried.  Was anyone going to even say hello, since the three couples with whom I shared both jeep and boat, never took their eyes off each other.  The reception desk was in the splendid white bar on a sofa…not a desk in sight, decorated precisely as should be in this Caribbean haven, white and rattan.

After we went over my itinerary for the next few days, one of the staff lead me down some stairs, over a flagstone walk to an all white, ceiling fan, suite #703, overlooking the sea and a few orange terra cotta roof tops.   The dark  furniture, coffee table, round dining table with a full bowl of topical fruit, the two small but well equipped bathrooms and the four poster bed with a black and white covering and draped with a mosquisto netting.

All this came about 10 years ago when Mrs. Ong and her daughter, discovered this ailing and failing building and smartly decided to buy the 1,000 acred island and build one the chicest but casual hotels in the Caribbean ( actually the entire island is on the Atlantic Ocean but meets up with the Caribbean Sea). 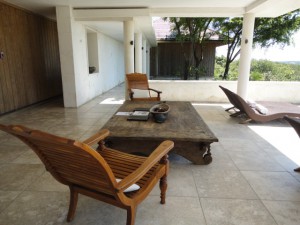 After spending some time on the verandah, I realized that Parrot Cay lives up to the brochures, photos and fame.  Never mind that I didn’t have a room mate,I was in love.

However, I had a foe. Geckos. I’m huge compared to these fast reptilian creatures, but if one of these browny green creatures stands too long and stares at me, I freeze. They are everywhere and to me seem to grow by the second.  My fear is finding one in my room.

Geckos aside, one of the interesting facts is that there was a time this island wanted to be part of Canada.  Forget politics of why it didn’t happen. All I could think of was what a great place to spend the Canadian winter months and not have to stand in the visitor’s line when arriving.  But it wasn’t to be.  It could have filled the Canadian coffers with dollars rather than ice and snow.

That evening, at the once a week barbecue, island music performed by three local musicians entertained as the crowd became friendly.  Watching the brilliant sunset, this cocktail party hosted by the GM, Grant Noble at the outdoor Lotus bar and restaurant overlooking the sand and sea, had me wanting to sing, “When you wish upon a star, your dreams come true.”  That open bar area which includes another open sided  Lotus, is definitely the most frequented area from morning until almost next morning. Near the infinity pool, over looking the ocean, palms sway and often a sudden gust comes through cooling the air momentarily. 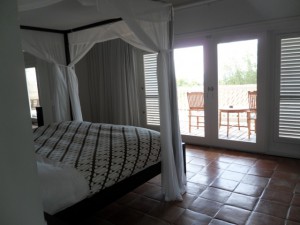 One of the important factors on this island is that the management is very respectful of the environment with desalination water, electricity is generated, compost works over time from the left over food,  each night the personal water bottle given to each guest reduces the commercial mass of plastic water bottles and guests are asked if they want their sheets changed everyday.

Although I didn’t see Bruce Wallis or fashion designer Donna Karan, both of whom have purchased land and built exceptionally lovely homes here. Hidden from the peering eyes, these have a forest of trees and a very long driveway for privacy.

Since the hotel’s occupancy was 100%, few rooms/villas/suites were available for site inspection. Shirley, the longtime assistant manager, drove up to the only available Island Villa with a circular drive to a property ready to be purchased. The three bedroom, huge living/dining room, indoor and outdoor showers,infinity pool, called Island Villa was built and could be sold my the hotel.  However, it is possible to purchase with a minimum of two acres, $ 1 million, an acre.  Building could be done by the purchaser or hotel but the hotel approves the design.  The asking price for this Island Villa is $13 million.

If there is one disadvantage at Parrot Cay,it is that it’s handicapped inaccessible. Stairs and hills are a challenge even for the fittest and the many golf buggies cannot navigate many of the pathways.

Other than sit around the pool waiting for the next wonderful variety on the menus, there are various activities.  For years I have been dedicated weekly to Pilates.  But Isabel, the American instructor, made me feel as though this was my initiation into this type of exercise. Polestar was her Pilates of choice and so very difficult.  And I was amazed to see that at 9am, 12 people, including 2 men, were present, most of us  struggling with the

Pilates circle. One man was whispered, “I didn’t think Pilates was difficult.  Now I can’t keep up.”

Another obvious activity is walking the long endless, spotless, albeit narrow beach.  It shows the attention paid to all the areas.  Just a few shells peek through the white sand.

Although the demographics were completely off these few days, the usual crowd is between 50-65 years old, and as manager  Noble said, “they’ve paid off the kids schooling, they don’t have a mortgage and now they have time to travel to the top end destinations.”

However, it seemed that Mom and Dad were left at home as the ‘kids’ seem to be here.  Couples of about 25-35 years old were in the majority.  But interestingly, for an unique and costly destinations, the return guests are 70%.

One middle aged couple, I met from Highgate, London, UK, have come to PC 6  times over  the past 10 years.  Another, a passionate scuba diver, Jim from Minneapolis, expressed his enthusiasm after days of diving and he’s ‘done’ Barrier Reef among many other top rated diving sites.  New Yorkers, Burt and Helen flew down on a last minute whim and though the price for late booking flight was exorbitant , there was no question to whether they enjoyed this private island. They took advantage of all the activities and are planning to return.

What I did find interesting, this being a privileged crowd, the dress code from morning to evening was as casual as one cared to be.

On the hotel’s yacht back to the waiting van which would take  8 of us travelling to various parts of the US, Canada and the UK,  each couldn’t express more enjoyment with every sense fulfilled  and exceptional experience on an island so isolated yet so very appealing.  Blue will never be the same.  That color, from sky to water has new definition as does the sensuous feeling of the finest white sand that finds its way between the toes