Consider yourself lucky if you haven’t been to La Residence d’Angkor in Siem Reap Cambodia. What awaits you is the heady pleasure of a well serviced, enchanting newish true Cambodian Khmer-styled hotel in the once inaccessible city which lost its innocence when the Kymer Rouges took hold. Sien Reap remains virtually still untouched by hordes of tourists and what heady pleasure to be able to discover this city without the masses. However, there must be something in the air to make the Cambodian government and foreign owned hotels realize that Sien Reap will soon be a tourist Mecca mainly due to Angkor Wat, the temple that dates back to the mid 12th century. 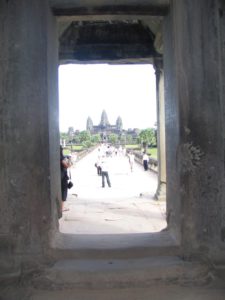 With the oppressive heat on arrival at the airport and no plans to have any one meet us, with great luck, we found a cab drive who was able to speak perfect English. Although this country that has been fraught with civil war, horrendous deaths and devastation, Tai our driver, who had lost his entire family during Kymer Rouge violence, was soft spoken, intelligent and definite about not wanting to discuss the past. His concern was where our hotel was located since he had never heard of it before. My travel companion, my daughter and I shot concerned looks at each other since we thought we had book a great 5 star hotel. In short order, after asking one of his colleagues, Tai discovered that La Residence had just changed ownership (now an Orient Express Hotel) and was formerly, The Pansea.

Now it was Tai’s turn to be impressed as he stopped in front of a shiny wood building. So animated was our conversation with him, that Tai became our driver for the next three days (we did have an official guide for ½ day who proved to be inadequate) and even though he didn’t have a tour guide license, he certainly knew the history of the country and the temples, the locations of temples both in the city and the country side.

Right in the centre of Siem Reap, facing the river that runs through the city, La Residence d’Ankgor is on a tree-lined street. To get to the lobby, there’s a small bridge over a lotus pond where white lotus flowers were floating over the water creating – perfect post card, we mused. The main market – is within walking distance as is the busy post office and Raffles Grand Hotel where they still serve a very English tea. And the bustling Foreign Press Club Hotel and restaurant, are all these across the narrow river connected by a short bridge. It’s an easy walk to most places. However, when walking it’s best to keep your head down. Sidewalks are in such disrepair that they have extraordinary cracks and bumps..

Angkor Wat may be just a 30-40 minute walk from the hotel, but conserving energy for the touring of the wat should be a major consideration. Since there never seems to be traffic jams with such a low ratio of cars, it’s the bikes that become the issue. By car to Angkor Wat is about 10 minutes. 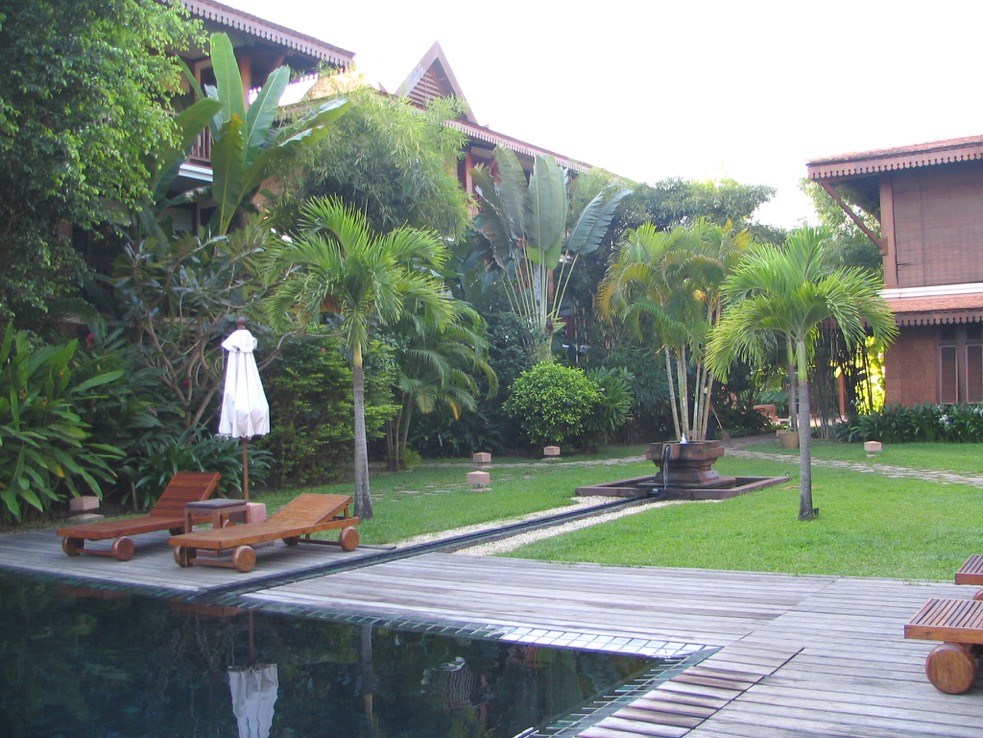 There’s something special to look forward to for anyone interested in ancient archeological sites, redevelopment of a once war torn country, a city that was emptied by an autocratic leader and the ever-present endeavor of the citizens to try to re-establish enterprises and a semblance of normality. From the lobby up the wood stairs is the very well used reading room cum tea room and evening gathering spot. The open sided area has local musicians each evening playing traditional instruments and music. The youthful servers seem to remember what you were drinking the night before and offer that choice.The Kymer architecture style design is carried through into the lobby. Shiny wood is used extensively in this large airy space with extremely high ceilings. Off to one side is a stair case which leads to a very Somerset Maugham-styled reading room which during the afternoon offers tea and by late afternoon. As evening approaches, it’s the place to meet and have a drink while listening to local musicians play Cambodian tunes.

Needless to say, with all the archeological wonders nearby, it’s hardy likely that you’ll be spending too much time in you room. But if you do stay around La Residence has a most attractive and large the pool area, set among palms, bougainvillea and frangipani. 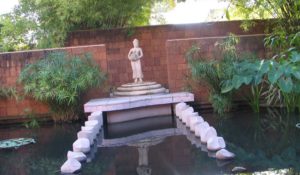 There’s a definite reflection of the royal seat of the Khmer Empire between the 9th and 13th century. Another design to consider is that the pool has proportions of the artificial lakes, the Baray, within most temples. This spectacular pool has 45,000 handmade, individually glazed tiles reach with a different shade of green from soft celadon to emerald. 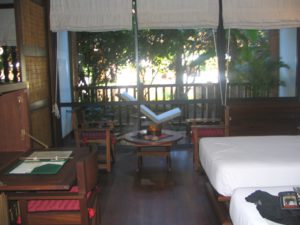 All rooms are designed with Cambodian heritage in mind. These luxuriously accommodations are appointed with teak furniture and silk upholstery. To ad to the spaciousness of the rooms, sliding bamboo screens separate the bedroom area from the bathroom. However, that does’t quite mask the units although a toilet is separated. Wonderful lighting over the dressing table is usually difficult to find in even top international hotels. Here, they’ve perfected the light so that no woman has to leave the room with too much blush or eye shadow. That and the free form bathtub made to look as though it was a smoothed concrete material, turn this into a highpoint. The balconies, though small, are perfect for breakfast and coffee overlooking the lush vegetation on early morning swimmers.

Once you realize that you must make reservations in the restaurant, do you realize how very popular this smart, sleek eatery is. Along with a varied menu with emphasis on Cambodian food, there is often the traditional Apsara dancers, all brightly costumed who perform…but with a difference. They’re all school children with great talent and sweet, shy smiles who love the applause.