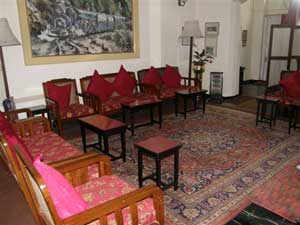 It’s a 2 ½ hour drive 90 km from the airport to Darjeeling, over pitted narrow dusty hairpin roads, through shanty villages and bustling markets, the cranky car often clinging to the mountain side dotted with of tea bushes, the driver honking at every curve. I am truly pessimistic about what to expect at the end of this 7000-foot climb. The name, Darjeeling is so romantic that I’m caught by surprise by some of the not so picturesque sights along the way.

Its history so filled with sagas of war and independence, with Tibetan refugees and high unemployment, that as a seasoned traveler I should expect the melange of sights and smells. This being India, you often find the unanticipated and so it is when the car stops and I am finally at my destination, the legendary Windamere Hotel, The Heritage Houses of the Himalayas. Here, feeling on top of the world, is a hotel that has been described as “bliss in a swirling haze”. The 37 rooms are in various cottages and larger manor-style buildings, sitting above the exuberant triangular plaza of Chowrastra, a village as unpredictable as this latter day paradise. The broad active squares filled with every sort of handicraft shop and souvenir store, leads to narrow, littered, quiet streets. I see smiling beautiful people in brightly colored outfits, looking more Mongolian with their high cheekbones, rosy cheeks and broad attractive faces and also the hard working mountain people, not looking at all like their southern Indian counterparts.

I’m shown to my room, #07, at the top of a curved staircase in a largish elegant ecru painted house, overlooking Chowrastra. Every morning, at the break of dawn when I look out, there are men exercising, others selling hot tea or coffee carried in wire containers, young boys playing cricket in a make-shift area before rushing of to educational institution, uniformed pre-scholars walking to their school in packs, their knapsacks loading them down, flea ridden donkeys nipping at the ground in search of some grains, and cows being given free range of the walkways and streets.

The Windamere is as old English as one could imagine. Pointed turbaned, white-gloved waiters serve the three daily meals in French style.

Early each evening, when the mountain cold is just about to descend, a young man with a bucket of coal comes to start the fire in my room that crackles throughout the night. Shortly after this chore, he returns with a hot water bottle which he’d places between the sheet so that by the time I’m ready to turn in, everything is very comfy and very cozy. A deep, long sleep is guaranteed after a day at this mountaintop aerie.

This morning, however, I’m awakened at 3AM to be ready for a drive 15 km away to Tiger Hill, ll,8ll feet (2590 metres)up in the Himalayan mountains, for what is considered the most breathtaking sunrise in the world over Kanchenjunga and other eastern Himalayan peaks. On a good day, the snow-capped mountains at sunrise are supposed to make the mountains look as though they are on fire. In fact, my guide Arum tells me that on a clear day besides the panorama of colors, you can see Mount Everest’s peaks breaking the skyline. However, today, experiencing “one of the noblest experiences of travel” is not to be. A hazy fog has covered the mountains and the frosty wind keeps me there just long enough to see the brilliant red –orange helium looking sun emerge from the clouds just for a few rare moments. Even for this miniscule experience, the trip is well worth the time and early rising. It is an amazing sight and The Windamere makes it possible for all their guests providing drivers and vans.

Still early, we shove through the throngs who have also come to see the colorful display, many unprepared for the cold as they hug and huddle with each other. The staff at Windamere warned me about being warmly dressed. However, coming from the heat of the room, I ‘m not as layered as I should be. The wind blows right through me.

Since breakfast at The Windamare isn’t served until 7:30AM, we have plenty of time for some early sightseeing and we visit the Peace Pagoda (the Shanti Stupa,) a white wedding-cake structure built in l992. Against the now light blue sky, I snap some photos – a postcard picture. Even after this visit there’s time before the four-course morning meal, to go to the Ghoom Buddhist Monastery, probably the most visited monastery in Darjeeling. The morning cold has even settled into the floors and when I remove my shoes, as one must do, I feel the icy surface shoot up my legs and wonder how the lightly dressed monks contend with this climate. I ‘m there to see the image of the Maitreya Buddha (the coming Buddha). When I leave, I deposit a small donation.

With the huge influx of Tibetan refugees, it was only natural that they would set up their own self-help centre, established in l959. The courtyard is alive with young boys and girls playing on the grassless space. The buildings surrounding the area have space devoted to various crafts. The first one I enter is the weaving of magnificent carpets. Rows of women of all age from very old and wrinkled to young scrubbed women, work the looms. The smaller leatherwork premises are in another building where there are only men. These crafts are sold along with woodcarvings and woolen produce at the shop, which is how they manage to finance themselves.

Just before heading back for a bowl of “the world’s best porridge”, we stop at the relatively newly constructed Gorka War Memorial, a striking structure in a garden where there are also tracks for the quaint Toy Train Loop. The train with dollhouse carriages curve and twist on a two-foot wide rail gauge at a slow pace- 10-km an- still chugs up and down the mountainous territory.

Back at Windamere, the large breakfast is in progress. Mr. SherabTenduf, the owner/director of this privately held hotel, is at his table for the first meal of the day. Mr. Tenduf tells me nothing has changed in years. “The most frequent quote in our comment book is, don’t change a thing,“ he tells me. Although it’s plain to see that there are some often-tired looking chairs and décor in North American standards would be considered dreary, Tenduf is adamant about no-change policy. “That’s what people want.”

The hotel has so many public rooms that given an hour in each, most of the day would pass. Each is a reminder of grand times past. Windamere is an original.. There are rooms with dark wood paneling, huge fireplaces, game tables, a fine library, a music room and the perfect bar.

I spend what’s left of the morning sitting on the terrace looking at the grand backdrop of five-peaked Kanchenjunga, reading and sipping tea. , I’m told that the best tealeaves are for export. Nevertheless, I think the drink is excellent and exquisitely served on a silver tray silver tray from a silver pots into fine china cups.

I begin to notice many people walking up and down a small road behind the hotel. Feeling very energetic with this wonderful clear air, after polluted Calcutta, I decide to follow and climb an unexpected very steep hill, which leads me to Observatory Hill, the town’s highest point. I hear the tinkle of bells and prayer chants and suddenly sees fluttering masses of hanging colorful prayer flags and a monastery with a series of breathtaking small temples for both Hindus and Buddhist. Instead of time standing still in this idyllic atmosphere, it passes remarkably quickly and soon lunch is being served with the same pomp as dinner. The menu is different each day and there are a minimum of four courses, all prepared in-house.

Tonight, before the evening repast and after the mandatory drink hour, four residents of the town have come to sing and play a strange looking instrument, which is a combination of a harmonica and an accordion. The two young women’s voices are, as I would expect angels to sound like, pure, calming and enchanting. And soon dinner is served.

My room, when I return, is heated, a bowl of fruit has been placed on my table, and the sheets are warmed. Yes, the Windamere is an original.

All meals (Breakfast, Lunch, Afternoon tea and Dinner are included in the tariff.
Sales tax and service charges are about l0.52%