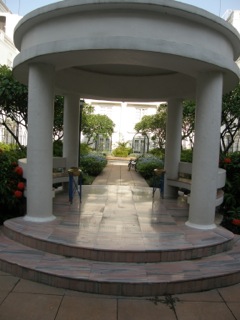 Although built in 1982, with an identical addition added ten years later, The ITC Windsor Hotel, in typical Regency period architecture has the look and ambience of an old gracious English manor. It’s so reminiscent of another time when India was an English colony and Rajas and their Maharanis came for visits. In fact, entering from the porte cochere, it’s so startling stunning to see the huge crystal chandelier handing from the sixth story lobby dome, that one wonders if one is in England and if not why there aren’t more Indian artifacts. But here there is a cornucopia of fine public art. Rooms are large with entrances that overlook the atrium with its wrought iron indoor balcony. 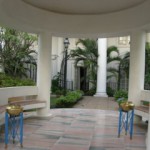 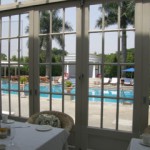 The ITC Windsor with its dash of English refinement comes with the efficiency of service by the staff that, in the true sense, looks after their clientele. No need to register at the desk or be concerned about the luggage, your arrival is so preplanned so that you’re whisked away to the waiting spacious accommodations – of course, depending on the room. 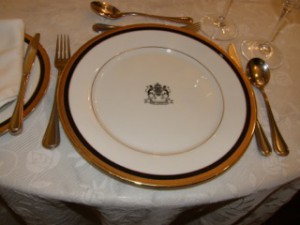 The most unexpected is an Irish pub, so clubby with leather and stain glass windows. Also so unusual are the huge green areas in this citified hotel. Dakshin Restaurant is a celebration of southern Indian cuisine where I had some of the best Indian food in this airy room where the food was perfectly presented. Certainly there’s the influence of the Dum Pukht Jolly Nabobs-( a sobriquet referring to the ostentatious lifestyles in India which continued for the English on their return to their homeland.

Bangalore is considered the IT center of India and the third largest in the world. And it’s strange to think that with a population of 9 million, it’s considered a small city compared to Mumbai, Kolkata and Delhi with double digit millions. The ITC Windsor Hotel has the perfect sightseeing locations so close in Indian terms to temples, the much visited Big Bull, (an enormous one piece of slate and well guarded by a very stern young man), not far from the shopping area called Commercial Street (the buzz and energy and the variety of shops is the typical area for tourists who want to see the real India), then there’s the famous botanical garden- all well within easy distance. So depending which direction you take, the hotel is easily accessible for sightseeing.

Gratefully, the English part of the décor was left in chintz heaven and instead the muted comforting colors are a relief. As I entered, I could see the terrace garden beyond the French doors. Only 6 rooms out of 120 in the old section and 6 out of 100 in the new addition have this wondrous facility of being able to walk out the bedroom into a heavily blossomed garden with gazebo and benches and be able to sit under a shady tree without the Indian cities’ signature- honking of horns or traffic noises. My grand room, #3222, with the large marble bathroom, was perfect for my needs but few hotels can compare Viewing The ITC Windsor’s The Presidential Suite #2550 there’s little question why The ITC Windsor boast of having Prime Minister Tony Blair and the Dalai Lama among other heads of state, Bollywood and Hollywood celebs and execs ask for this suite. Many would find this array of rooms not easily duplicated in most 5 star hotels. That old saying of being served ‘hand and foot, is a truism and certainly a throwback to the days of the Raj. Sure it’s glamorous and large but there’s not a hint of over-the-top gilt but subdued luxury that goes from the salon to the separate Campbell soup red dining room with a large circular table for 8 which is pre-set with the stunning Crested Windsor china and linens and a private entrance for staff. The large bedroom and major size dressing area are equipped with every amenity needed. An interconnecting room is available for a very large extended group or family. As for the bathroom, as expected, marble is everywhere in this exceptionally large room and the towels are a triumph in fluffiness, the surfaces and ledges perfect for even a cosmetic queen.

Beyond for the staff, there’s small modern kitchen. Stairs lead to the very large and white clad terrace is the perfect venue for a great party and the best view of the burgeoning city. It’s here there’s a meeting of chic grand London hotel and cool New York boutique hotel.

Long staying guests often for months and some for a year make the Manor section of The ITC Windsor their home away home. I would too. The suites in the Manor area are named after English Lords. The Hastings in the new tower the new area has a massage and gym area, small dining room and large dressing area which look over the city. Long staying guests just move in.

One of the greatest achievements is The ITC Windsor’s dedication to women travelling alone and the Women’s Aware Program. Several rooms on the Eva floor are for women only and come with women staff including butler service and female security guard. Any request is served by women. The ITC Windsor is probably the only hotel that has refined this dedicated program recognizing the needs of women travelers…both tourists and businesswomen. 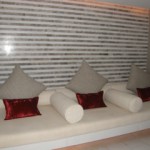 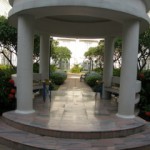 If you can’t find what you need, the butler is just a button pressed away. Want your clothes hung, she or he is there, need an espresso, it’s made to your preference. I felt that although I really could manage whatever I needed on my own, it was my obligation to ask and be served. Wi Fi throughout, spa that accordingly is a stunner with great technicians, especially the Thai therapist who stretch and pull to release any tension or give the greatest foot reflexology weary from the day of sightseeing. The great attraction is the Aryuvedic massage done with two aesthetician “working as one”.

Just a press of a button will bring, in minutes, the butler. However tempting it was to linger in bed and cherish my surroundings, I wouldn’t have wanted to miss the great breakfast room is the lovely breakfast room. It was also an opportunity to mix with the other guests. Bottom Line

The mix of Indian service and English to- the- manor born are so integrated that the harmony of the best of both worlds is what makes The ITC Windsor Hotel a winner in the category of any top rated hotel worldwide.

One may have expected it, but nobody stood up to sing Rule Britannia although I wouldn’t have been surprised to hear the humming if not the words. 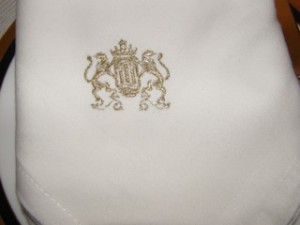