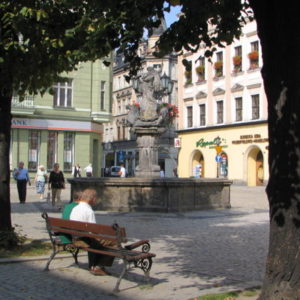 My guide, Renata and I reach the historic, over 700 year old town of Swidnica.  As with most Polish cities and towns, there’s a main square where we have a typical but far too large Polish lunch of steak, potatoes and pierogis.

Our visit is to see the Church of Peace, about a 10 minute walk from the square and considered the outskirts of town. We pass small shops and modest houses. This is not a city of great wealth and with a population of only 20,000, it has a great amount of parks, about 11, which makes Swidnica very picturesque. 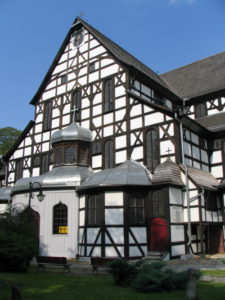 An inconsequential stucco archway next to a gift shop leads us to a walkway in a tree- filled garden where the sun is streaming through the leaves making the most unusual patterns on the grounds. I stop at the sight of the white stucco building crisscrossed with black wood. I immediately think it’s a Tudor look- alike. Its architecture seems so out of place since it’s located in a district of ordinary low rise, Soviet-style square, unembellished buildings.

Renata, urges me on since we have a full schedule before darkness descends and we have to drive back to Wroclaw (Warsaw) on the narrow road. The building appears small, but once inside the true size is a surprise.

This basilica has a most unusual history and is somewhat of a miracle. After the Thirty Years’ War, the German Emperor Ferdinand III was forced by the Swedes to allow them to erect a Protestant church. So in the mid 1600s the site was marked out by 200 steps each direction, a true square. The church was allowed to be 100 steps long and 50 steps in width. There’s no clue of who measured this or how big his feet were but it is a sizeable church which could accommodate 7500 people and seats 2000. If one believes in miracles then construction is just that. The only materials that was approved and allowed for the Church of Peace were wood, sand, clay and straw, absolutely no nails or metal supports. There were also a few conditions, one being that there could not be a belfry and that it had to be built within one year. 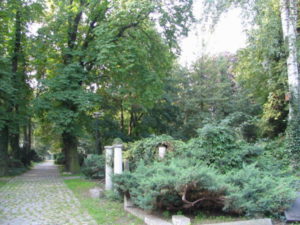 The corner stone was laid on August 23, 1656. Much thought about the design is obvious. The plan is a Greek cross and has the main part of the three aisles cross the three aisle transept in the center of the church. Wooden columns were use to act as retaining elements. 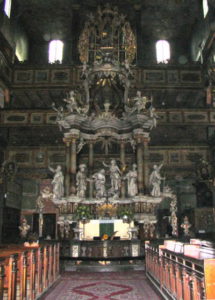 NOT A NAIL IN SIGHT

Expected by the Catholic donators of the land that this all-wood, timber frame building would never last very long through the difficult winters, it is now a great curiosity and a UNESCO listed world heritage site. However, I look around, and other than Renata, there is a lone man who is deep into reading a travel guide, never looking up to see the rich interiors with wondrous painted ornate hand made wood carvings which have been well looked after but with the assistance of outside finances. Because there are so few Evangelicals, about 120, maintenance was too costly for them to absorb the funding. Enter the Church Foundation Gustav Adolf, Federal Ministry for Search and Technology in Bonn, Federal Foundation of Environment Protection in Osnabruck and Foundation of Polish German Cooperation in Warsaw, each donated enough money to allow restoration. Concern about the framework, which was in a catastrophic state, was a priority. It would have been a colossal disgrace if this building hadn’t been saved. 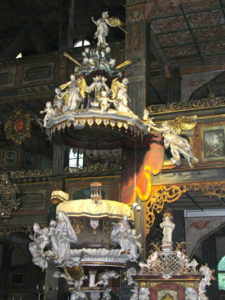 The beauty of the interior and its artistic artifacts could easily be interpreted and worthy of being called a museum. And remembering that all the bas relief and panel and sculptures are all wood, it was a triumph to complete these perfectly executed figures and the extravagant pulpit which stands in the north eastern corner. Above the entrance door there is an effigy of Jesus the good Shepherd. Looking at the organ, built in 1666-1669, the stunning baroque instrument is supported by athletes, and figures of angles and the ceiling is a work of art based on the theme of the last book of Holy Write – Revelations of St. John. If one took the time, they would discover 78 texts of Biblical verses and allegorical scenes in this richly decorated basilica.

Our drive back to Wroclaw is long but pleasant as we applaud the magnificence of the Church of Peace. A day of complete pleasure.