DUBAI, NO PROBLEM SPENDING MORE THAN YOU THOUGHT POSSIBLE. SOME MALLS ARE THE BEST IN THE WORLD AND HARD TO OVERLOOK

Dubai is a major multi-cultural city where there are 185 nationalities. And with tourism growing at a rapid rate, the Dubai government is in the process of building the largest airport, Jebal Ali International Airport, to support this industry. 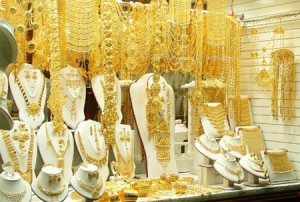 Dubai was established in 1830 by the Maktoum family. Once a pearl center, the demise of this industry came after the discovery of cultured pearls. Great thought was then given to Dubai’s future. Oil was discovered in 1966 enabling the transition to commerce and trade. Their oil reserve wasn’t as endless as some of their Emirate siblings.

It’s a mind twister to realize that Abu Dhabi is under two hours away by car. It could be another planet. 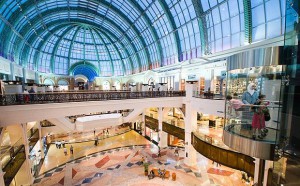 The city is spread out so it’s important to make a plan, decide on a destination and stay within the area. Known for shopping from electronics, optics, jewelry, home furnishing, clothing and restaurants, I yearned to see the renowned malls. But they aren’t just a shopping experience. They are a destination, many staying open until midnight.

Besides all the boutiques, Emirates Mall, has a unique, very large glassed-in area which contains a busy, unbelievable snowy ski hill. The line-up on the slopes reminded me of my days in Canada’s Laurentians. Apres skiers and onlookers were three deep vying to see this incredible spectacle while the very brave inside, donned rented warm, parkas and all necessary equipment.

Our stomachs finally got in touch with our brain. We were hungry. The warm weather was perfect for al fresco dining. Sam decided on the posh Dubai Creek Yacht Club. Palmed and very private, the long drive to the restaurant featured a golf course and a yacht-filled marina. We ate lightly, me, a terrific tuna salad and Sam, some fish. Dinner would be our grand meal. 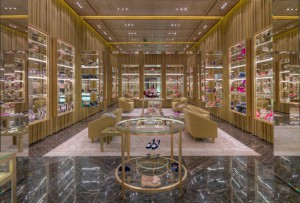 But we still had to see various malls and hotels. Wafi City Mall, with an Egyptian theme, even though Freete, Channel, Missoni and Boss are among the known designer shops, has a significant huge stained glass dome depicting Egyptian themes.

“There’s pride in every building that‘s built here,”Sam,my guide, said pointing to the intricately carved Egyptian pillars. For local authentic purchase, The Arabia Oil Boutique, with 400 branches worldwide, has a cache of essential oils and a choice of exquisite bottles. Sniffing all the scents gave me a high and finally Sam decided on Dehn Aloud, a very fresh aroma made with white musk and jasmine.

Next Mall was Madinat Jumeirah which tried and succeeded in looking like a modern- day souk. But with Starbucks and KFC outlets, the imagery is a bit difficult. Outside there’s an Italian-like plaza and a man- made, fish filled lake making this a great respite from the crowds.

My favourite, Burjuman, was due to the fact that there seemed to be an easy direction path instead of a direction guessing game. Each mall is so humungous that losing one’s way seems to be the norm, the mall plan board always crowed- lost souls great riches. Burjuman, large as it may be, is the newest and most fashion forward. And in the midst of men in traditional white or blue ‘dishdash’and women wearing their black ‘abayas’, there is a two storey Saks Fifth Avenue.

But forget Milan’s Via Spiga, Paris’Champs Elysee, or New York’s Madison and Fifth Avenue. Since I visited, I’ve been told there are even more malls. It’s retail heaven for self-confessed, shoppers.