Dubai, a city with 5 star rated hotels that deserve the rating.

Ah, Dubai, the metropolis which sits of the Arabian Gulf with a population of over 1.5 million, made up of 85% expatriates. Within seconds of reaching the city, one can’t avoid noticing the building boom and the heat, easily 30 Celsius and this is winter.( Summer temps go into the high 40s Celsius occasionally hitting 50 Celsius). And the curiosity is that this city is surrounded by water and often called the Venice of the Gulf. It’s a misnomer but a very wide water thoroughfare is called the ‘Creek’and divides Dubai –Deira Dubai and Bur Dubai. A clever move was to prohibit large delivery trucks on city streets. Small vans are re-loaded with the supplies. 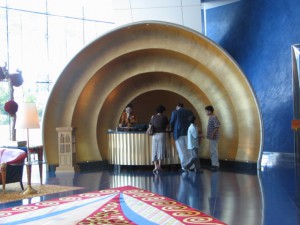 Dubai is a major multi-cultural city where there are 185 nationalities. And with tourism growing at a rapid rate, the Dubai government is in the process of building the largest airport, Jebal Ali International Airport, to support this industry. 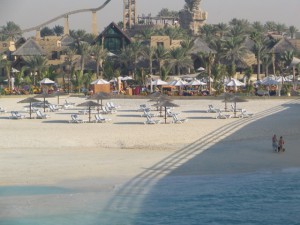 MAN MADE BEACH FOR HOTEL GUEST

After checking into the 5 star Fairmont Hotel, Sam, my guide in Dubai,a thirty six year old Egyptian born Canadian who moved here 2 years ago, was to be my guide. Sam had come for a holiday, considered the business opportunities and never left.

Dubai was established in 1830 by the Maktoum family. Once a pearl center, the demise of this industry came after the discovery of cultured pearls. Great thought was then given to Dubai’s future. Oil was discovered in 1966 enabling the transition to commerce and trade. Their oil reserve wasn’t as endless as some of their Emirate siblings.

There’s a plethora of five star rating for hotels -true to their rating.But the self-proclaimed 7 star Burj Al Arab is magnificent. Built on yet another man-made island, it’s every tourist’s wish to see the interior. Unless your name is on the list, the guards don’t allow you over the bridge to the entrance. (I’m sure every travel writer who visits Dubai wants to see this incredible edifice. When I called, I suggested they Google my name and within 20 minutes, the return call was an invitation to a site inspection) The options are to either stay there, book a table for a sumptuous tea overlooking the man-made sandy beach or have dinner with the best view of the city. These will give you an entrée into the world’s tallest hotel.. The incredible glass and steel ‘billowing sail’architecture is the signature of the city as the opera house is to Sydney Australia.

Inside it’s a concoction of Disney World and Las Vegas. The unusual mosaic, stepped, lobby fountains, the gilt columns, red leather and gold sofas, tropical fish-filled aquariums straddles the escalators and all is outdone by the restaurant suspended 200m over the Arabian Gulf. Each guest is meet by at least 6 young women dressed in Dubai designer outfits. The reception is only the first of many surprises as guests are led to what could only be described as a gold painted, shell designed large reception area. And then there’s the aquarium that is on either side of the escalator that is where there are restaurants and shops.

Sam wasn’t exaggerating when he said dinner would be a great surprise. On the shores of the Arabian Gulf, The One & Only Royal Mirage, is a complex of three distinctly different hotels, each with their own name, set in lush bucolic gardens, the ambience elegant. Much attention to Arabian architecture detailing at the Arabian Court was only surpassed by the meal at the vibrant, Nina. ‘Simply Nina’, the house drink is mixed with gin, lime, mint leaves, ginger, watermelon cubes and sugar syrup, the perfect introduction to our meal. The Indian Tasting Plate with 4 appetizers and three main dishes and pizzazz presentation. The two other hotels on the property are The Palace where bronzed camel sculptures linger in the greenery, the interior equally magical and resonates an oasis while the 50 room, small, discreet The Resident & Spa is perfect for a romantic assignation.

It seemed the most likely place to say farewell. There, in one place, were all the ingredients that make Dubai the Golden City–expats and locals mixing amicably, obvious affluence, hip clothes, a young social scene in an extraordinary setting. I felt ancient next to these extremely fit, slim, extraverted, gyrating people who seemed to have their life all tied up in one gilded portfolio.

If I have any regrets, they are, not having enough days to discover more of this foreign flavored city nor the time for some retail therapy which in retrospect, would have probably driven me mad trying to make decisions