The Emirates Palace Hotel in Abu Dhabi hosts the world’s heads of state. And even the most sophisticated has to be in awe, 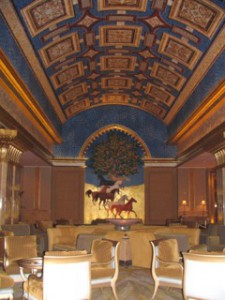 Abu Dhabi, the capital city of the seven Emirates, is the hub for Etihad Airways and I chose this as my first destination leaving the more thriving Dubai until the last. I wanted to be able to compare the two – Abu Dhabi, once a humble pearl centre, is a cosmopolitan unhurried city eager to catch up with its not-as-rich but visibly-more opulent, commercial centre, Dubai. 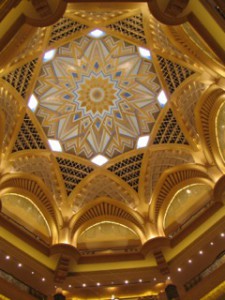 On the way to Dubai, the schedule was a stay over at a hotel. I gulped when I arrived at government owned Emirates Palace Hotel located on 85 hectares of gardens, the largest and probably most costly hotel in the world. Greeting me under hand carved graceful Islamic arches, were two glorious young people wearing gold and black brocade coats who looked as though they had been sent from central casting. With only 302 deluxe rooms and 92 overwhelmingly large suites and a staff of about 2000-every room has a dedicated valet, Emirates Palace Hotel also has a staggering 144 domes, the largest is 42 m wide and finished with silver and gold mosaic tiles. Inlaid marble floors the color of the UAE’s different sands shades, helicopter pads, landscaped pools, and the need of good walking shoes to cover the length of the palace which, from end to end, is 1 Km while a walk around the building is approximately 2.5 km, the hotel’s target guests are at sheiks and heads of states from countries worldwide who congregate for massive conferences. This palace-like edifice is so supreme, a splendid stay for a night or two, but on my last trip, it was very quiet, the high end shops in the lobby had disappeared. Not matter, it’s one of the most glorious hotels I’ve stayed in, not long enough. 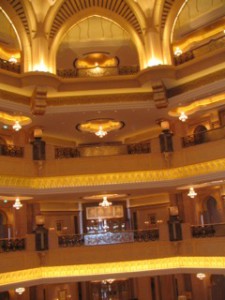 What an introduction to a very oil rich country. I was loathe to leave my elegant room for sightseeing. City roads are in perfect condition and are relatively traffic-free. We made our way to the port to see the dhows (wood boats) and fish market for local color. The renowned Gold Souk was a bit of a disappointment since there was a sameness in every shop. However, the spectacular mosque in the process of being built, is grand and the 4th largest in the world. But time was not on my side since I had plans to go to Al Ain, the Garden City, blessed with substantial ground water resources. It’s an oasis in the desert which dates back to the 4th century BC. About an hour from Abu Dhabi, Al Ain is more affordable and the population of 200,000 is planning a future for tourism and not oil.