Home
Africa
This is WWW.INDULGEDTRAVELER.COM’S 23rd e newsletter.  In an age where brevity is a must, the newsletters are shorter, although admittedly, this article is longer than most.  But it’s worth the read since isn’t traveling all about experiences, education and sights/sites/  El Ghriba fulfills these categories so enjoy  the newsletter a much as I did learning and writing about this exceptional synagogue. 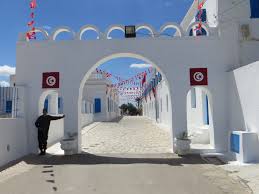 A few years ago, while in Tunisia, I decided to take a side trip to the island of Djerba (the largest island in Africa, in the Gulf of Gabes), where the oldest synagogue in Tunisia is located in what was once a Jewish village: Hara Srira (“small village”) or Seghira.

Records show that Jews came to Tunisia after fleeing from Palestine in 586 BCE, following the destruction of the first temple. Legend has it that a stone and a door from Solomon’s Temple is incorporated into the building. The fewer than a thousand Jews who have remained in Tunisia, still consider this the center of Jewish life.

Once there were 20 synagogues in this country but by the 1950s there were only five. I had always wanted to see El Ghriba Synagogue. And luckily I did. El Ghriba (“the marvellous”) has an ancient Holy scroll (the Torah), the oldest in Africa, is here.

El Ghriba was considered “a repository of a vanished culture” which based its religious practice on the double system of custom and law.

A year after my visit, this historic place of worship, was partially destroyed by a truck that killed a dozen people (2002). In 1985 during Simchat Torah, three people were killed by the policeman hired for security. I recall, our car had to be left at a lane-like, quasi parking lot, a five-minute walk from El Ghriba. Far enough from the synagogue to know this disastrous incident would occur.

When I arrived at this typical whitewashed Tunisian building, renovated in the 19th century, Sbirsa Ben Khammous Boukhriss, wasn’t in any mood for an interview. “Maybe later”, he told me. And who could blame him? The rabbi of El Ghriba (“strange, solitary, and wondrous”) Synagogue was watching the hordes of tourist tumble out of package-tour buses, parade through the historical synagogue, totally disinterested. Only a few of the travelers, like me, were looking for their roots or on a pilgrimage. For most, this destination just happened to be part of their itinerary.

THE BEAUTY OF THIS VERY MOORISH BUILDING 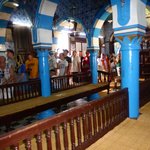 The actual entrance of this renowned synagogue was opposite a building which had been a former Hebrew school, then housed a few official offices. Although it was locked to the public, I was given permission to enter the large blue door leading into an empty courtyard surrounded by two levels of rooms.

This Oukala (inn) was always filled during Lag Ba’omer (an annual pilgrimage) 33 days after Passover. I wonder now, if that building will ever again rent out its small rooms during this auspicious time and whether the courtyard of the caravanserai will ever again be filled with merchants selling food, clothing and books.

A REMARKABLE NUMBER OF TOURISTS 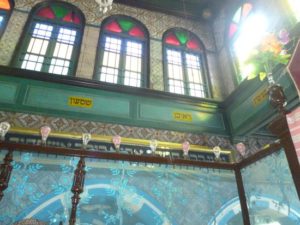 I recall watching with astonishment, the growing number of visitors who arrived.

El Ghriba has several myths regarding its origins. One that seems to dominate, is the tale of a beautiful and virtuous, young foreign girl who arrived alone in this strange land. She built a small hut in a desserted area which burned down. The hut was reduced to ashes while she remained inside, unharmed. To commemorate this miracle, El Ghriba was erected on the spot of her hut.

I entered an oblong outer room and was asked to remove my shoes, a custom usually reserved for mosques. There was definitely a Moorish influence—-the shape of the arches, the tile work and the bright colors. Dark wooden benches were placed back to back, some facing the carved, raised podium (bima) which was surprisingly unadorned. Embellishment came from the ornate crystal chandeliers, yellow, blue and white tiled walls, floors, and the silver-edged oil lamps that hung from the walls.

Since I was there in the winter, the floor tiles had been covered with matting so that the feet of the visitors could stay warm.

AN EGG IS A VITAL PART OF THE TRADITION 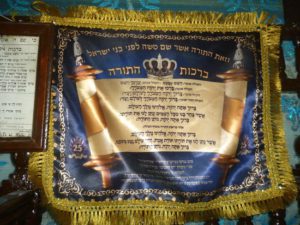 Although many of those who marched through the synagogue seemed disinterested, there were those who quietly walked down the short aisle, then up the stairs and down the other side, reading important documents on the walls. The observant ones didn’t miss an alcove under the ark that was illuminated by candles.

During Lag Boomer, there is an odd ritual which took place in which both Jews and Muslims took part. A raw egg with the name of an unmarried girl was written on it. When it was retrieved at the end of the pilgrimage, the candles’ heat had hard boiled the egg, which was then eaten by the young woman, assuring her of finding a husband. I was told that it had been so successful that crowds of single women came each year.

A RANSOM FOR MY SHOES, PLEASE 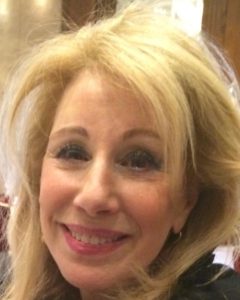 Meanwhile, Sbrisa Ben Khammous Boukhriss sat in a darkened corner with his back to the chaotic scene which occurs several times daily. When the tourists were about to leave, I laughed as they spent time crawling on the tiled floor, looking for their shoes.

However, laugh as I did, with all the chaos, my shoes had disappeared. I eventually found them at the other end of the room and this gave me the opportunity to see the Hebrew wording that recalled the twelve tribes of Israel.

The skull caps for the men and the colorful head scarves for the women were eventually placed back into a basket, to await the next bus load.

When the noise level eased, Sbrisa Ben Khammous Boukhriss, who spends his days sitting in “my synagogue,” praying, watching, thinking, philosophizing, waved me over, giving me some quiet time. I wondered if he was thinking about the few hundred Jews of the 5,000 who once lived here among a population of 99% Muslims. Boukhriss, at that time, assured me, they co-existed in total harmony.