A PHOTO BOOK TO TOP MANY OTHERS

You’ve been asked to quickly come up with a great public relations idea for this celebration. 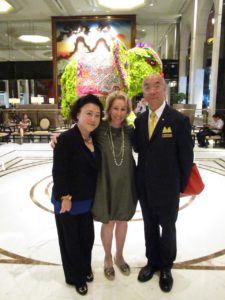 So I’m pleased to say my dear friend, Patsy Chan,  head of the communication and public relations department, who has been with this rarified hotel for over 23 years, always is most reliable and so smart.

She came up with  an idea that only some one who knows the luxury, history, demography of guests and friends, would really appreciate.

There were a few sleepless nights but what came out of this demand is one of the most clever announcements.  It’s a thick brochure, black, grey and white  photos from days past in Kowloon.

It’s title, Kowloon Shangri-La Hong Kong, Celebrates the Cultural Heritage of Tsim ShaTsui  in maroon/ red which stands out on the cover- a grey stone archway.  It’s certainly a journey of discovery. 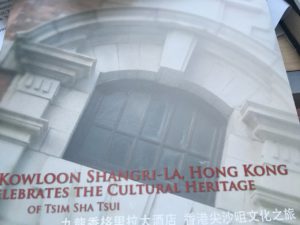 A HISTORY THAT IS UNIQUE

Flipping through the pages dating, the world thought this part of the continent as a British Colony, which it was until ‘the handover’ in 1997 when it was returned to the United Kingdom China. No one could have imagined that ‘the Pearl of the Orient,” would eventually become  a major financial centre among other assets. 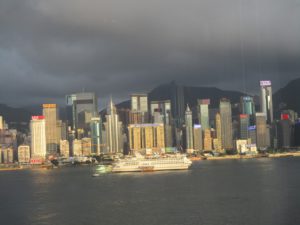 The trip from Hong Kong Island to Kowloon on the Mainland by the Star Ferry, still brings tears to my eyes.  The beauty of the surroundings are magical, but the trip far too short,  Now it’s even shorter as part was land filled. Even the terminal has been moved shorter. But I’m a most nostalgic scribe.

Photos, in the black and white album, show the inaugural train to Lo Wu, a border town in China, 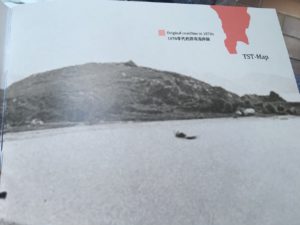 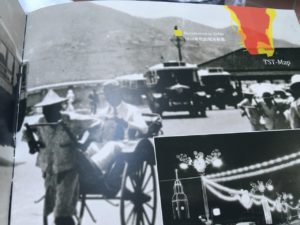 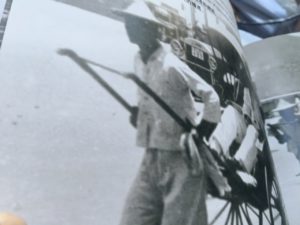 In the 1930s, Tsim Sha Tsui, a village, had very prosperous opportunities. By the seventies, the main street, Nathan Road, my favourite street for shopping, bargaining, eating, sipping tea and talking to sales people  and helpful locals, has become an area with a somewhat naughty night life. But during the day in this combined areas of H.K and Kowloon with a population of  7,6  million people, it’s a non stop mega-metropolis with tourism increasing every year. In 2015, it increased 4.2% which is considered low for this part of the world.

And when visit China or even India, I try to return  to Kowloon Shangri-La Hotel, my beloved hotel. 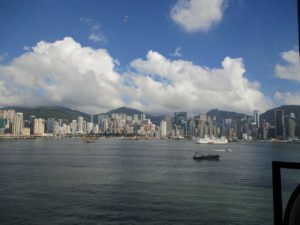 view from my window

As I looked through this thick brochure, I see a replica of a photo in the booklet of what I am actually seeing from my hotel room. I see Central and all the magnificent famed skyscrapers that continue to change this majestic skyline. Is there one that comes close? Not for me.  And just looking at the ships and small boats on the river below, alway captivates me. Wharfs may have disappeared, as futuristic developers and billionaires started erecting these buildings that grow higher and higher, in this once quaint city.

BEING SPECIAL IS A SPECIALITY HERE.

Who doesn’t appreciate feeling special? Staff know your name within minutes of arrival and while in the executive lounge, again overlooking the  Central, the servers remembered how I liked my coffee ( black with a drop of skim milk, please) and what newspaper I like to read, 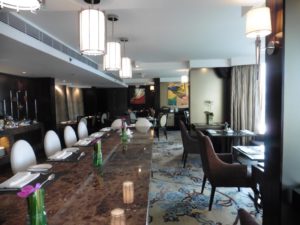 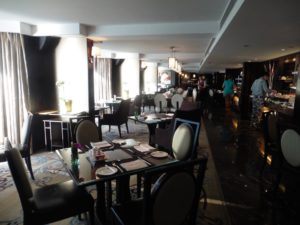 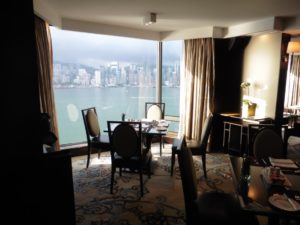 As for the accommodations, the rooms are decorated beautifully to the point where I became enamoured  or I may say, obsessed, with the lotus pattern of the rugs and their colours as well as the technological available equipment. As for all the amenities, I could have just come with a handful, instead of an my entire cosmetic counter. 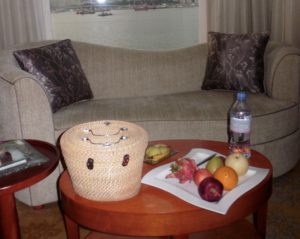 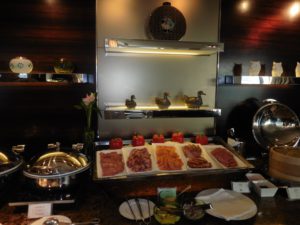 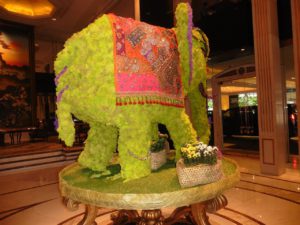 elephant of flowers and moss

And then there’s Shang, a 2 two star Michelin Guide award winning Chinese restaurant on the lower level.  It was redecorated a just a year ago. I recall  it was so beautiful then and now even more stunning with new gold and Chinese red  panelling. So much thought goes into making this one of the top hotels. Each season, Chef, changes the entire menu. with new creation of sumptuous dishes. I keep asking if they are ever going to publish a cooking book.  And then there’s always such a buzz since it’s so special, a true experience for culinary mavens with knowledgeable palates.. 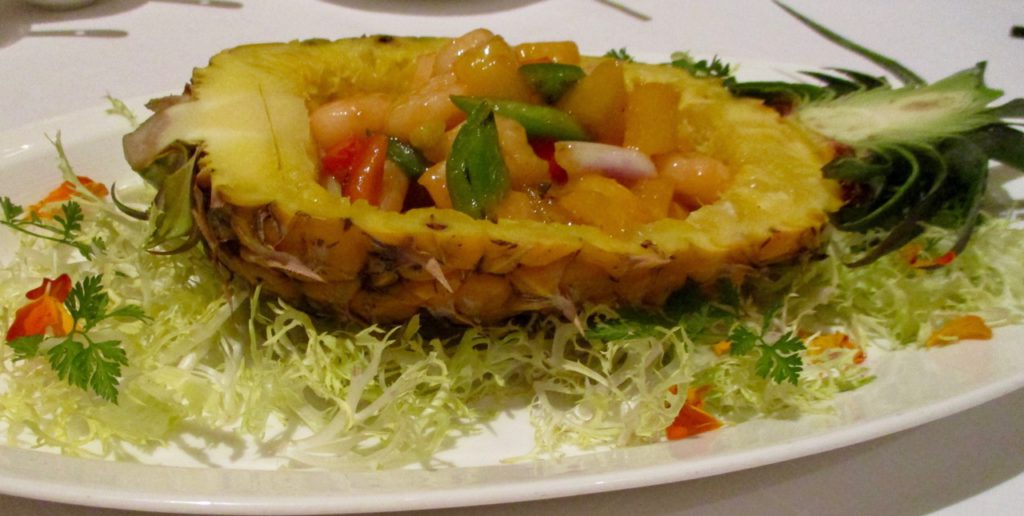 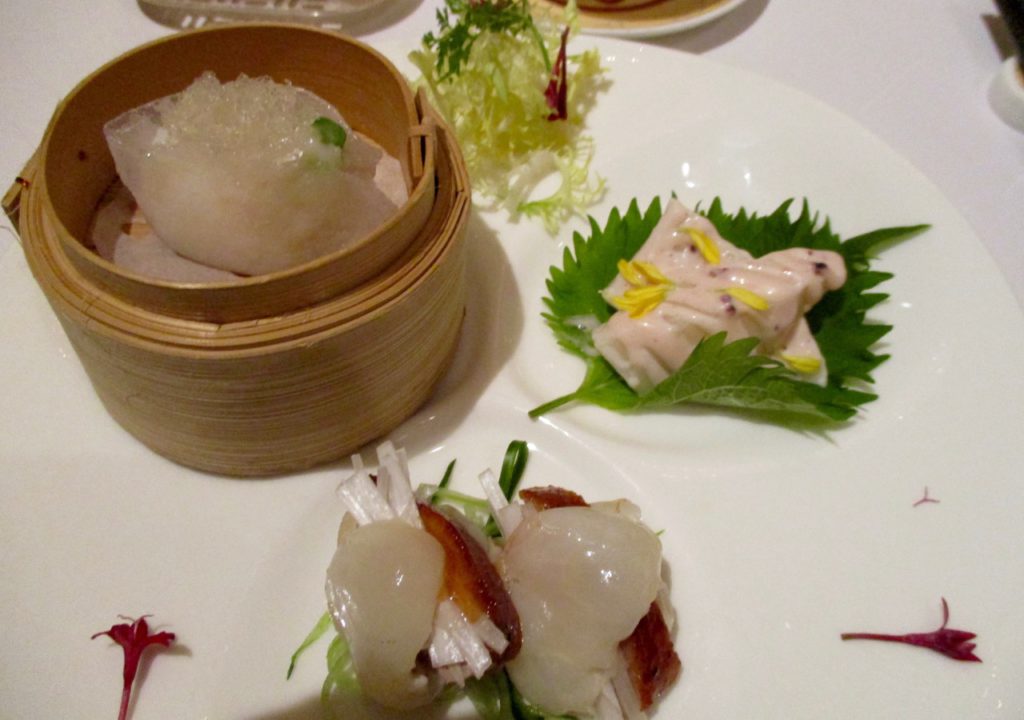 I continue to go through the pages  of this catalogue and see more photos of Kowloon and at the top of one page there’s…The Legend Continues. From Kowloon Station, the famed promenade takes you to the Clock Tower.  The Kowloon Garden, off Nathan Road, it a tranquil spot to wonder through or just sit on one of the benches and contemplate life. It’s the perfect green space -, in this Hustle bustle, noisy city. 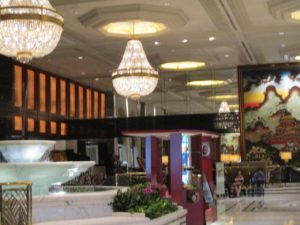 IT HAS BEEN SAID,’ NOSTALGIA ISN’T WHAT IT USED TO BE’.  BUT IT’S PRETTY DARN GOOD.

I remember vividly how impressed I was  with Nathan Road and the Banyan trees that line the busy street from the  first visit and then when I lived in HK for some time.  And equally memorable are the juxtaposition of the Edwardian buildings and the traditional Chinese houses, now mixed with towering edifices.

My Chinese doctor lived near by, as did my herbalist. And on my first visit to the small Tin Hau Temple, I purchased fortune sticks and the one that  flew out, was translated, saying that I would forever stay in this area. 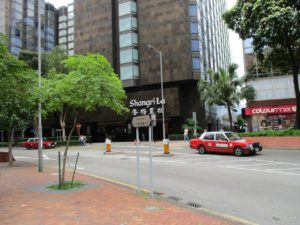 Although, physically I’m no longer there, my thoughts are never far from Kowloon and the splendid Shangri-La Hotel with the friendliest, family.  “It isn’t work but one very big happy family,” Patsy explained.

The penultimate  page of the booklet, has the last word. There’s a coloured photo of the ‘family’,  their thumps up.  An extra thumps up from me for  Kowloon Shangri-i La Hotel.

AND NOW IT ENDS! 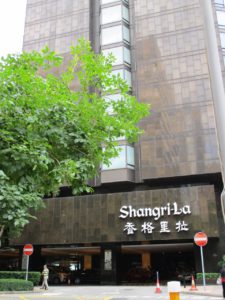 I miss being  there and  as I sit in my office looking down at my small garden in mid Toronto, I reminisce about this latest visit and stay at  the Shangri-La Hotel as I listen from a radio playing outside,Canadian singer, poet, old acquaintance from Montreal, Leonard Cohen, singing, Hallelujah.

That  tune, that voice makes me realize my loyalties and passion for my two favourite countries.  From C(anada) to C(hina)  or as our logo says… from Sea to Sea.  Hallelujah