I recall my days as a student and young mother in London (England) when I saved my few extra pence so that my husband and I could go for tea at the Ritz Hotel at least once.  And the presentation astonished us as a waiter set down a three tiered carrier with crustless watercress and cucumber sandwiches.  Other offerings were, of course, scones and clotted cream and our choice of tea. But that was so long ago that I only remember the ambience more than the tea.

Recently, with my  now grown up daughter,I enjoyed revisiting and seeing the scene (since she was too young to remember) and the status Tea at the Ritz, as everyone was dressed for the occasion, some waiting for one of the three times that Tea was served. Since we were staying at the hotel, the required several weeks pre reservations didn’t apply to us.

We were seated where we could see the hustle and bustle. And as one would expect, majestically served.

Skip several years and we were living in Hong Kong.  Who wouldn’t want to have tea at The Peninsula Hotel, affectionally known as, The Pen.  Tea was presented with white glove service and the most polite, proper and obviously perfectly trained by the Brits, the wait staff was perfection. What I liked most was searching out the well known celebs who stay at this famed hotel. And there always seemed to be a famous familiar face.  Actually, I’m not into being part of the paparazzi but I did see designers, and actors and wished that I had  my camera . However, the older I became, the more interested I was with the actual tea and taste.

So tea has always been a favoured thirst quencher and a complete fascination to the point that my Darjeeling friend Mr.T, never comes to visit without an exotic or a new tea taste.The last gift was a 2nd Flush Muscatel,  rare, gentle and truly with a noticeable difference from, let’s say, Earl Grey.   He doesn’t admit it, but he really has the knowledge of a tea sommelier and insists that I leave the loose leaves in the hot water for at least 4 minutes.  Knowing my weakness…lack of patience…he does allow for 3 minutes. 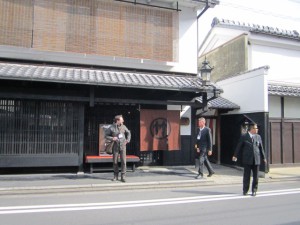 Now getting to the point, on a recent visit to Kyoto, Japan sipping tea took on an entirely new dimension. Known as ‘the way of tea’, it was a true ceremonious hour with a sense of movement much like  choreography. The art of performance, (Otemae) began and there was certainly a Zen Buddhist influence with the observance of quiet and concentration.

It wasn’t just a cup and saucer and arigato-thank you.  We were seated at separate low tables, legs crossed on tatami mats.  My knees wouldn’t allow for the cross leg  position so I was forgiven and stretched them full length.  On the table were sweets (Hachi) to counteract the often strong taste of the tea and also small square silk napkin (Kaishi) for either a place for the sweets and certainly to wipe the bowl at the end of this ceremony. 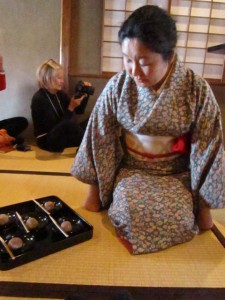 It started with a kimono clad, middle aged woman, opening the sliding traditional paper thin doors to bless the room.  Then still on her knees for the entire ritual, (Ocha), she began by showing our small group how to prepare the tea and the instruments needed such as the tea caddy (Cha-ire).  The needed utensils ( Dogu) were taken from a box. 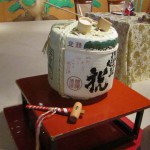 Inside were the essential implements like a bamboo ladle (Hishaku) for transporting the hot water to the the most important element- the bowl, (Chawan), which is wiped with loving care with a red or orange napkin. When this function is finished the napkin is folded like a piece of origami and sashed into her wide obi sash.This powdered green tea (Matcha) I had never seen before.
At this point a lovely young woman in a pink kimono arrived from behind the Japanese screen (her grandmother was a tea connoisseur and encouraged her to continue this very complex and time consuming study. She was now an assistant.) 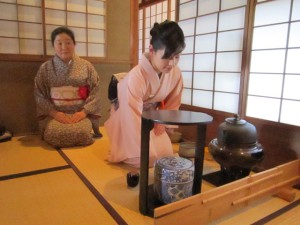 A long, thin spoon with a tiny scoop (Chashaku) made from a single piece of bamboo or ivory, was needed for the two scoops per cup.

She was so attentive to wiping the bowls and the scoop, never once looking up. After the tea was placed in the large bowl, it was then covered with boiling water and stirred with a short, rattan, open topped whisk (Chasan), also made from a single piece of bamboo.  The tea was then whipped not side to side “but use your wrists and do it quickly, in an up and down movement,” our guide Mie, translated.

Spell bound by this scenario, the next issue was to how to hold the cup.  So what’s new with this, I thought.  Well, you are given the cup in your right hand and then you transfer it to you left palm.  It is placed with the cup’s decoration towards you. The cup of now frothy green tea also has a ritual  “Turn the cup clockwise twice and then make sure that the design, when finished, faces outwards and so all could see”, said this matronly connoisseur.

Finally, it was time to taste the deep chartreuse liquid. One should finish the cup with just three large sips and the last should have a loud slurping sound to show the appreciation of this great quality of the tea.

Truly a deliciously different taste. And when the presentation was finished, the warning was that we wipe with our napkin,the area where our lips met the cup.

After the young woman bowed, she disappeared behind the screen. And with her great agility of a much younger woman, the matron stood up without even a hint of losing her balance while I struggled by pressing on the low table for stability. I was glad that this was only the short version of what often is a much longer full ceremony (Chaji).

With a new  incentive, and observation that not only does green tea add years to your life, judging from the elderly women’s frisky demeanor, I was planning to include having many more cups of tea, double my exercise ritual and stay away from that other addiction, coffee.  So from now on, it’s powered green tea which has been whisked to a slight froth and served in a stunning pattern cup, facing outwards, of course.