In a city with 1,600 Buddhist temples, 400 Shinto shrines, hundreds of gardens, and a population of 1,5 million, when I was told that I would be visiting a doll store, I wondered what the planners could have been thinking. 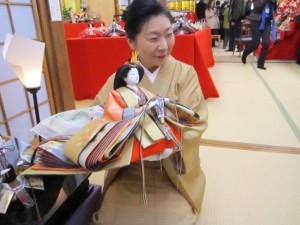 I haven’t played or even touched a doll since my daughter grew up and that was a few decades ago.  In fact, she didn’t love them enough to have a keep sake.
But then I didn’t know about Hina dolls and once seen I certainly quickly became a fan. No tradition in Japan is new and Hina dolls go back over hundreds of years although other traditions are a 1000 years old.

In this shop, the best in the city,  Ando Keiho Doll Shop are pricey but given that they could take days, even weeks to finish since there’s a strict adherence to their craftsmanship, after touching and just looking at these masterpieces gives reason for the painstaking work.

Now the 3rd generation, maintained by Keiho and his wife Keiko (started by the grandfather and now the 88 year old father still makes dolls) they  are hands on in overseeing every aspect of their treasures in this shop.  Their hope is that their son will continue the tradition. 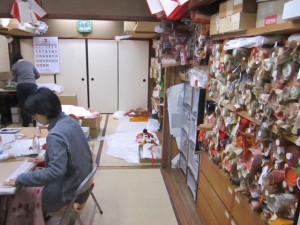 After passing a workroom with 4 women stitching silk, another cutting a pattern, we were ushered to the second floor.

Since these marvelous dolls are world renowned, there are clients that come every year to add to new dolls to their collection. 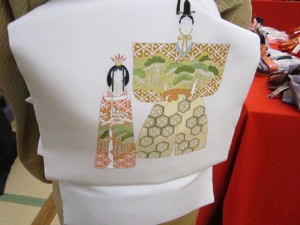 Wow, was all I could think of saying.  Here were over 100 dolls in various shapes and sizes being presented on several levels in the second floor shop. This is truly part of Japanese history.
There was so much to observe and Keiho,  a slim man in his 60s helped with the history.  He told the story of a Thai politician, not knowing what to gift the King of Thailand to commemorate their close relations, had a Hina doll especially made for the King and dressed in a persimmon/orange robe woven in the fie silk with lotus lowers.   There’s a reason, Keiho told us, that the King was sitting on the left rather than the usual right of the Queen.  Apparently, all temples are placed facing the east, hence the daylight and the sun shine on the King first. And since there  is an intense interest in silk in Thailand as there is for embroidery in Kyoto, the King was most impressed with this present. 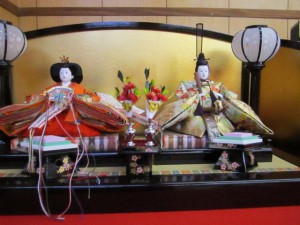 Kanreki, is also a very special occasion which means someone has reached their 60 year birthday, a very auspicious date. The Hina dolls for this occasion are dressed in red while there are different colours for each season.
However, there are at least 12 layers and more depending on the occasion and cost but they say twelve since it’s often too difficult to count the layers of different colored but perfectly precise collar and sleeves, which Keiko admits that since that’s her job, it is most difficult.

On reason for the many layers, says Keiho, is that is does get cold in Kyoto and this was one way to stay warm. 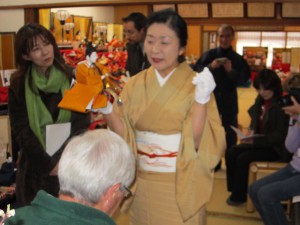 Then it was Keiko’s turn to speak, and she reminded Keiho that the first present from him was a Hino doll made especially for her.  Then when she turned 60 years old, looking much younger than her 62 years, he presented her with the traditional red clothed doll.

The shop become overwhelmed with work as March 3rd nears.  It’s a traditional celebration and the tradition keeps the 10 staff members extremely occupied.

Keiko talks about how difficult it is to make the arm angle especially with all the layers but with the division of labour, each of the staff has their expertise and with their combined experience, it’s all put together.  Teaching is done on the premises since there is now school only mentors and masters who help them learn the trade.  The legs, arms and body are made from fine light wood of the Polonia tree, the hair is silk and the quality of the silk of the kimonos and embroidered obi sashes are made of the best textiles. 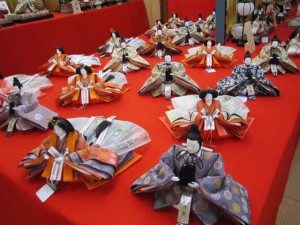 At one time, about 400 year ago, these perfectly stunning dolls were for young girls from Imperial families and the upper class.  Gradually this honored tradition was integrated into the population. They are said to ward off the evil eye.

Most of these exquisite dolls as are pyramidal with their kimonos spread out depending on the amount of silk and organza and obviously the size of  the dolls which range from small perfections to larger stately presence.  And when purchased their prominence is on the centre of a table.

Since only the Emperor and royalty can have Hina dolls that wear the persimmon, there is a a rainbow of colours and patterns to choose from. 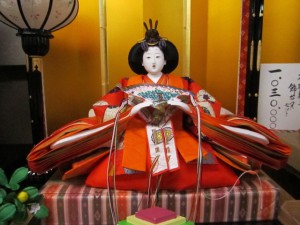 The white faces, much  like the make up of a geisha, was once made from powered shells and applied on the face.  Today plaster is used although it does look much like porcelain.

Most of the dolls  eyes are slightly closed as if in meditation.   And if there’s any shock, which could be an eye opener, is that prices start at about $600 and go up to double digit thousands..  But there’s no pressure to buy, just to see and get an insight into an old tradition.