Madrid is a city of plenty.  It has at least 44 museums, a history that is daunting, many imperial boulevards, numerous theatres, palaces, outdoor monuments.  It’s a city of guitars and flamenco huge open green spaces, unexpectedly polite locals, and safe drinking water.

THE RAIN IN SPAIN ISN’T ALWAYS ON THE PLAIN… 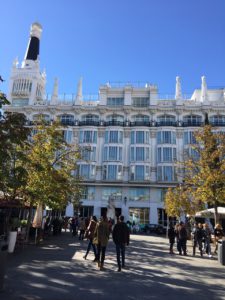 I’ve been to Madrid when it rained for a few days, not little sprinkles but serious downpours. A lesson learned! Buy the lightest, smallest umbrella and have it with you whenever you go out.  What to do during the downpour?  It’s the perfect time to visit a museum that was on your list. Just metres behind the Nacional Hotel, where I stayed, is Reina Sofia on Calle Atocha. Of course, every day, I intended to go since it was so close. Nothing could be better than to see the famed, heartbreaking canvas, “Guernica” by Pablo Picasso, a work that makes this museum one of the top in not only Madrid but also the rest of the world.  As for Museo del Prado, on any day it’s perfection.  Expect to spend a few hours (or for some, a few days) in this amazing art museum.  Museo Thyssen-Bornemisza (free on Mondays) is a few minutes’ walk from del Prado. 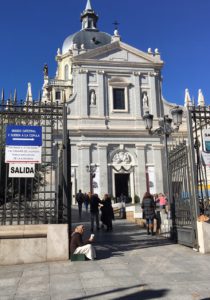 Rain is the perfect time to take a city bus tour. Whether the sun is or isn’t shining on the unique sleek to wedding cake-style baroque architecture, it’s a great form of orientation.  Also, when retail therapy kicks in, you’ll know where to go. It’s an excellent ‘map’ for districts you may not have known about.

NO MATTER WHERE YOU ARE, IN MADRID, THERE ARE ALWAYS GREAT EATS

I hadn’t been in Madrid for an hour and since it was early morning, my hotel room wasn’t ready yet.  I waved down one of the city’s 16,000 taxis and headed to Calle Serrano. Here you’ll find the high end retail boutiques and always many cafes.  It seems that on every corner and within a few metres of each other, there are cafes. I walked to the historic Cafe Gijon, dating from the 1889s (Recoleta 21). 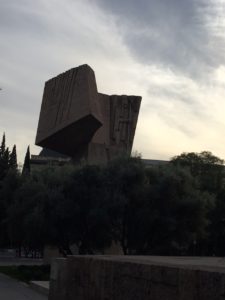 Another favourite is Museo del Jambon, on Paseo del Prado.  Packed, standing room only, and with not enough stools; only that great ham sandwich made up for the elbowing and added pleasure to my casual and friendly chats in the Spaniards’ broken English and my almost non-existant Spanish.  I know that tourists love Botin, off Plaza Mayor,  (Calle Cuchileros, 17),  the oldest restaurant in the world.  But you’ll find many locals there also who go for the divine food, especially the suckling pig with its marvellous ‘crackling” and also the superb lamb dishes.
I was given Ernest Hemingway’s corner table. What a privilege!  As a frequent client, Hemingway would linger quietly at this small table. 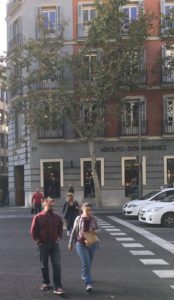 Las Letros (Literary Quarter) was the district for writers in Spain’s Golden Age, the 16th and 17th century. Lope de Vega mentions that he was a longtime resident.  The street is aptly called, Cervantes.  Bronze inscriptions on this and various other cobble stone roads in the area, display quotes from many of the writers who lived here.   Las Letros remains a centre for the literati, but also has a perfect blend of bohemian ambiance, where many young, creative fashion and jewelry designers’ shops and eateries have opened.

TAKE ME TO YOUR LEADER – IN FASHION 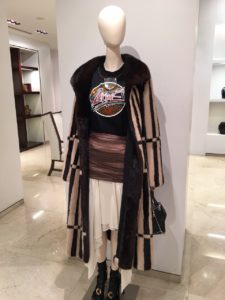 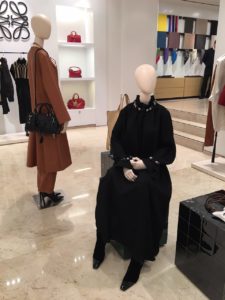 The first stop that satisfies my fashion addiction is always Adolfo Dominguez (Serrano, 5).  This 40-something-year-old designer just suits my lifestyle and my taste in sweaters, shoes, handbags, jewelry and ensembles and my price point.

Another is the very posh, and famous, Loewe (Lo evhay, not Lowey).  Expensive?  Yes, but oh such glorious leatherwear and more (Calle Serrano, 26).
Tired of stilettos and back aches?  At Pretty Ballerina, footwear abounds at calle Lagasca in dozens of sizes, colors, styles.  And surprisingly, they’re not overly expensive.  While in this area, check out Calle Jorge Juan for many clothing boutiques where the odds are that you’ll soon have lots of shopping bags to carry.  However, back to Las Letros. 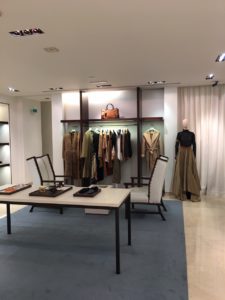 Some of the most wearable and extravagantly stunning designs are by Ulises Merida. His shop stands out with its very sleek, modern white store front.  His method of folding and twisting fabrics and roping and combining various textures makes him one of Spain’s best.  For years he did only couture for regular clients. Recently, he opened his first boutique across from where Cervantes lived.  Merida’s signature blouse that made him famous, has wide cuffs, a double collar in linen or charmeuse, to be worn with jeans or evening wear.  If he’s known for anything it is his sensational mixing of fabrics e.g fine ecru linen with folds and bands in sequins. 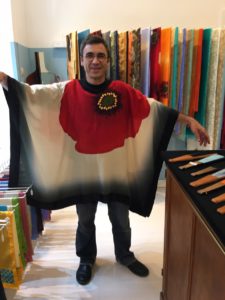 Lola Fonseca (Cervantes, 20 ) began silk- screening scarves in many sizes, 26 years ago and now her son, Claudio, has carried on in this popular shop. Inspiration comes from nature and all the production is done on site. 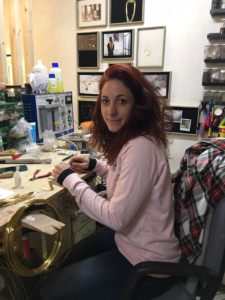 With the takeover of many hotels by Marriott, they have chosen among the best properties in Madrid.  Duke Santo Mauro built a palace as his residence.  Now, Marriott has kept it as close to the original as possible as one of its hotels.  The burgundy and gold-coloured living area is large as is the formal dining room in its suites. Its busy bar is darkish and there’s a lovely intimate restaurant open to the public.  In the summer, reservations for the outdoor garden eatery are in demand. 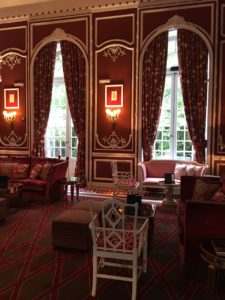 Rooms are large and although each is different themed uniquedly, they are all decorated in subtle colours. 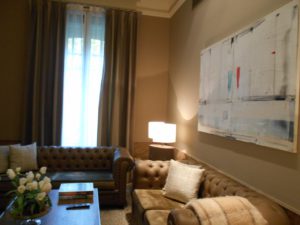 Another Marriott in Madrid is the The Palace Westin. The locations it tops.  Across from the Prado and near the Thyssen, calling it grand is an understatement.  The stained-glass dome is outstanding and has a unique history. During Spain’s Civil War, this huge and glorious pillared room was used as a surgery, mainly because of the light from this dome.  Now a huge below, a handmade rug design of color florals matches the dome  and  is a great venue for tea.

Suites are spacious, modern and a a grand place to stay if you have a packed wallet.

ONLY YOU,  is a new, chic and trendy hotel in Madrid.  From the moment you step into the lobby, the clever decor- a pile of white sculptured luggage of various sizes and elevator interiors that look like a library- are but a few details that make this a most desirable hotel.  Rooms are hip, as one would expect, and overlook a fine square 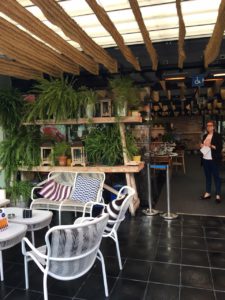 There are dozens of markets in Madrid but only on Sunday is Restos, a mobbed market that features everything from clothing to artisans’ works and, of course, nibbles.  Take time to explore the side streets and their many shops, as well.

San Miguel on Plaza de San Miguel is the only iron structured market left.  With its 33 stalls it has a diversity of foods and many opportunities to stand at a counter for a quick bite and glass of wine.

My favourite market is in the vibrant Chueca neighbourhood. There are also about 30 heavenly shoe stores in the area.  San Ildelfonso has three storeys starting with a grocery section at the bottom level, then the market with a marvelous fish selection, and a great terrace restaurant on the third floor.  Its renovations began in 2002 and finished in 2011 making this 19th century building, new again.  A wonderful venue to explore!