As with many incurable travellers, fantasies persist. And for those tireless adventurous types, destinations are becoming more exotic and unconventional.. Any peripatetic soul with lofty ambitions now have the opportunity to visit and stay at a few of India’s ancient forts and steep themselves in the former grandeur of the residences of Maharajahs and their Maharanis. Some of the glitz and gilt of the palaces may have dimmed but in many cases, the ‘bones’ are still very much in evidence and the regal-ness of their original luxurious persona still exists. The forts, still mysterious with pitted turrets and ramparts, create an ambience hard India’s forts and palaces

Getting to India is a long trip but flying directly on Air Canada’s new route to Delhi from Toronto, shaved about 4 hours off flying time. As an inveterate insomniac, with the help of the great pitch of the business class seats, I had a decent night’s sleep. I awoke ready for a trip to ancestral homes and renowned forts now heritage properties.

Hate it or love it, one thing is sure, you’re never leave the subcontinent feeling indifference.

“This is Kipling’s India,”said my new friend, Bob, a former school teacher from San Diego California referring to poet Rudyard ,who was born spent many years living in India. We sat enjoying a cup of refreshing Marsala tea on the lake view terrace of Pushkar Palace overlooking the city’s holy lake, metres away from the chaos of the narrow street. Pushkar, a pilgrim’s destination, has over 500 temples with the only temple in India dedicated to Lord Brahma. has changed little over the centuries and its past goes back to medieval times. 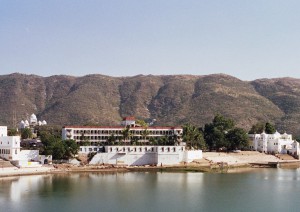 Built 400 years ago, the now hotel was revamp by Jaget Singh, the 10th grandson of Rao Jodha, the founder of Jodphur. Singh grew up in what is now a Welcom Heritage managed property although he remains the owner. The lake palace in the heart of Rajashtan, was the summer residence of the Maharajah of Kishangarh and modeled in traditional Rajasthani style. As Singh and I walked through the streets, this man of impeccable taste, wearing a quasi western, perfectly fitting suit, was bowed and saluted to by the locals, dozens of them employed for one of his three hotel properties, the others are Jagat Palace where he now resides and Royal Desert Camp, a tented accommodation in the Great Thar Desert, all nearby.

Pushkar Palace with 53 rooms, many overlooking the lake and panoramic view of the numerous temples and ghats, were totally occupied during my stay. This didn’t seem to surprise Singh since, he said, India has become a destination for those who have seen and ‘done’Europe.

My room on the fourth floor, reached by a narrow twisting marble staircase was small but I did have a lake view which more than compensated the squashed quarters. The bathrooms are modern, there’s a ceiling fan, enough wardrobe space and a heater for the coolish nights. The palatial suite #102, where Singh used to reside, is decorated with rosewood and local lime stone plus a palette of colours for which Rajasthan is known. My neighbour, whose room didn’t have a lake view, never seemed to leave the terrace rattan chair where he could see the hubbub of holy people and crowds of tourists while reading in the Zen-like serenity. The only time he left his perfect perch was for the meals with a menu with a choice of continental and Indian. The food at Pushkar wasn’t too spicy and included traditional. Malai Kofta, Paneer Bhurji, Vegetable Raita, Missi Roti..

The hotel’s 4 star rating is a bit of a hoax. It should be a five star hotel, however, taxes in India, like elsewhere, are a consideration and that extra five pointer would add additonal costs on the property..

Pushkar Lake Palace attracts Europeans and Americans but it also appeals to the Indian people who see this as a cool summer escape, long recommended from generation to generation

Prices start at…Single without meals about CDN $70 to$150. Meals range from $7-10. Facilities include internet, air conditioning, laundry service, travel desk. Getting there. Domestic Airport at Jaipur is 149 Kms, Rail in Ajmer is 13 Kms, International Airport in New Delhi is 400Kms.

Driving in India is a life threatening affair. Many roads are just an unpaved single lane but the adeptness of the drivers, as they miss by inches on coming trucks, is unquestionably, a great talent. The constant honking horns isn’t out of rudeness, I soon discovered, but a warning to the hoards of trucks who have signs on their rear stating to please honk. As they move over to the side to let cars pass, I’m amazed there are no finger signals or hostile looks.

The 3 ½hour death defying drive to Khimsar Fort, another heritage property, each small village is interchangeable and poor. Dusty roads edge small store stalls and sad living arrangements. India is a patchwork of sadness and religion, poverty and unabashed riches.

The entrance to Khimsar Fort built in 1523, is majestic with it’s grand wrought iron gate entrance and blossoming trees, a disturbing juxtaposition to the humble dwellings just outside. One learns in India, that to enjoy what this incredible country has to offer, often means, overlooking situations that a visitor can’t change during their short stay.

Two old cannons near the reception area are the perfect adornment for this battle scarred fort’s glorious past located on the edge of the Great Thar Desert. An interesting part of this huge 50 room hotel is the 18th century ‘zanana’(ladies residence) with fine carved stone windows for ‘purdah’(veil for the ladies in waiting). Smart orange and red turbaned and uniformed guards salute guests and within nano seconds, you’re hooked on the spectacle of this unexpected resort. This was the ancestral home of Rao Karamsiji who was the 8th prince of Rao Jodhaji, the founding Maharaja of Jodpher.   Kunwar Gajendra Singh, the 19th descendant and his wife, Kunwrani Priti ( who is indeed, a very pretty woman) come over and greet me as they do with most of their guests. A section of the fort is their residence which is part of the sprawling 11 acre area. As promised this is truly an authentic experience befitting a Rajas and Maharajas. From the inner courtyard where family functions were once held, I’m lead to my extremely large apartment size as are most of rooms of this 50 room hotel/fort. Each bathroom here would be almost as large as most hotel bedrooms. Dressing and sitting areas, and the huge bedroom with Rajasthani architectural arches, have all the modern conveniences of telephones, room service, air conditioning and refrigerators. Below the fort ramparts, are the former stables. The space now has a sauna and steam rooms, gym and massages by Kerelan trained technicians known for their skill and use only products form that southern State and in the garden, a large swimming pool… Breakfast on the roof-top dome, once an observatory, is a joy as most guests sit for hours lingering over the view of the countryside. Dinner is served in the remnants of the grey stoned .ruins with small niches and tables are set with candle light.. Other meal are occasionally at the fort ramparts Also on the property are some fine Indian ware filled shops. But one boutique stands out. It’s the Nila Moti Trust which was set up by a Swiss woman and encouraged by the Kunwrani Priti.   A few dozen local women have been hired to make wonderfully crafted clothing with the proceeds going to the women and the village About 15 minutes away, is another property of the Singhs. Ten wonderfully designed clay, sand and cow dung round thatched roof huts will soon become 16 since they are so popular. Sitting in the midst of the desert with all the comforts and fine dining, there are camel rides and evening meals around bonfires. It’s an unique experience that is designed to make travellers want to return especially at night when the sky is so filled with stars, you wonder if the supply has depleted rest of world. And as I sat on the camel for my bumpy but adventurous ride, the blond fine sand looked as though a sculptor had a hand in the design of the pattern.

For pure Rajput architecture, Bal Samand Palace built in red sandstone cjirca 1595 during Sawai Raja Sur Singhji’s regime, should be high on the priority list of admirers of an era where lavish buildings were de rigueur.. Modest, is the first impression I had when I drove to the front building. There was little to predict what existed on this 300 acres estate..Down a long colonade are 26 former curved ceiling stables of wood stone and white plaster rooms. In the beginning, an aquaduct ststem was specially designed to run above the Stables in order to keep the horses cool during the steamy summer months. The only sound now, in this completely occupied hotel, is the tweeting or birds and the sprinkling of water hoses in for what was one of the finest orchards of its time. Pomegranates came from Afghanistan and were introduced by Bal Samand.. Comfortable but not certainly not luxe, these rooms overlook the expansive green lawns filled with exotic birds, cocky monkeys and arrogant peacocks. But this is just the introduction to the palace, a splendid specimen, which over looks a 13th century reservoir. It isn’t difficult to imagine gold trimmed sari clad ranis and perfectly turned out rajs, leisurely walking from the massive palace hidden well behind huge lemon trees, the air scented with flowers and a massive three tiered fountain. Inside the palace turned hotel, there are 9 extraordinary suites, some visited by super model Naomi Campbell. The Royal family used this as their summer residence. Most are accessible by a sweeping white marble double staircase. The original furniture fills these large rooms, some with chaise longues near a window for the view. The headboards and chairs are elaborately carved and nearby is always a red turbaned staff member to help with the most minor activity e.g. opening a door.

A nine hole golf course and putting green are near a swimming pool installed in 1998 sits amidst 17th century pillars. The restaurant is large but charming with Rajasthani specialties set out on the brick buffet or a choice of continental from the menu.. Palak Paneer, bsegetables in spieces rolled on a skewer

Nearest airport Jodphur is 90 Km and connects with flights from Delhi, Mumbai and Jaipur. By road drive to Khimsar from Jaipur, Jodphur or Jaisalmerd.