After my 12th or maybe 13th visit, I had made acquaintances mainly through interviewing various people of interest. And recently one of my ‘new friends’ invited me to his son’s wedding.

Who would or could resist an Indian wedding? So with my air mile points, I was on my way to an extravaganza that not even Bollywood could reproduce.

Each of the three days, (I stayed longer. Who goes to India for 3 days?), my every hour, from brunch on to evening events was full. Out of town guests received the itinerary which had been beautifully printed on a heavy vellum card.

The bride’s family had an evening, so did the groom’s parents. Cocktails, stated on the card, were “dress code casual elegant”, except there is no such thing in this affluent social group.

Everyone looked so very India Vogue-smart. Bling during before the sun went down was small, while the evening glitz and glamour of the soirees were “blingtastic”. Did they water these jewels during the day? The parties got bigger and the saris more glorious (modern renditions of Indian outfits become totally mind blowing, not so sari-like any longer). Men lucked out and had open necked shirts in the 40c (105f) heat. 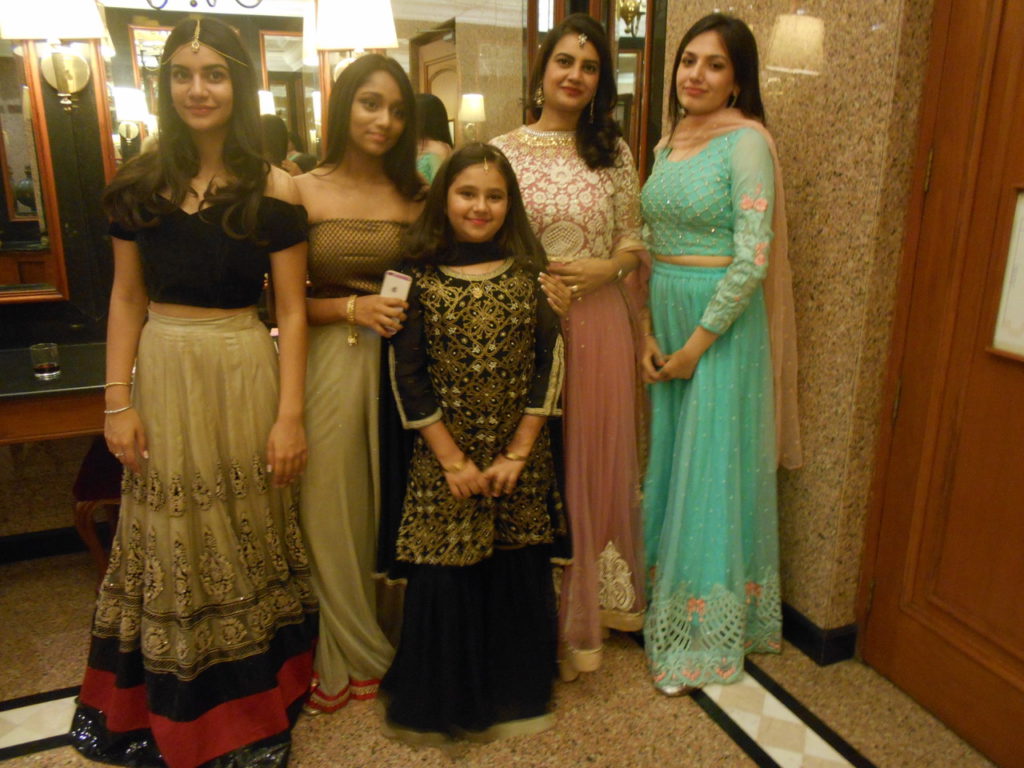 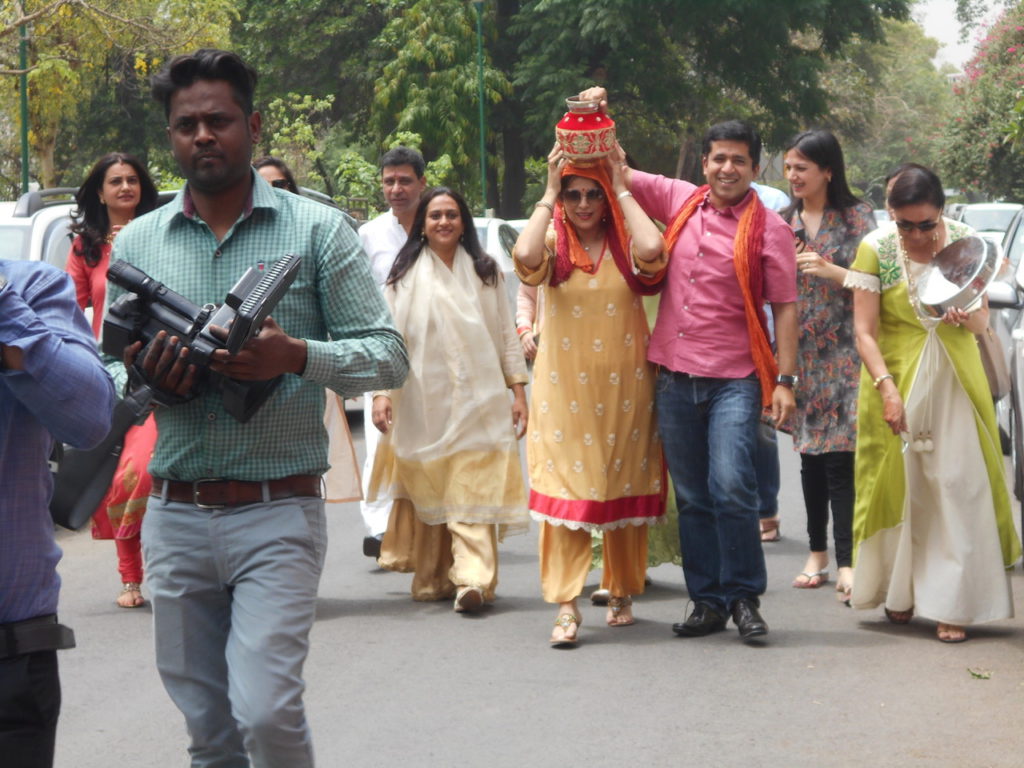 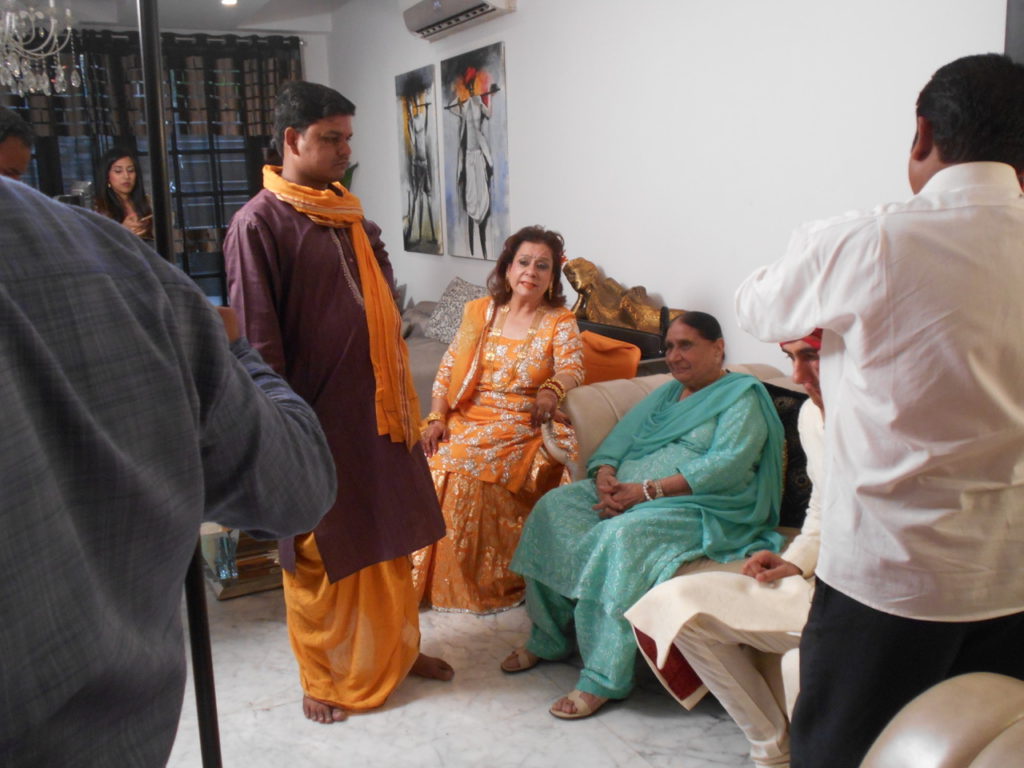 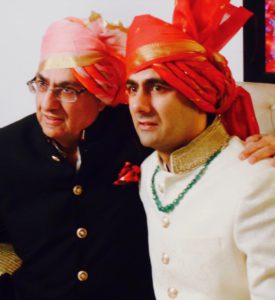 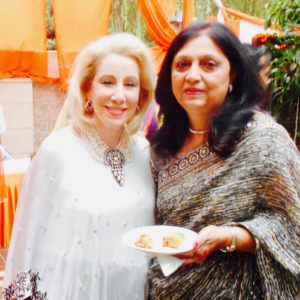 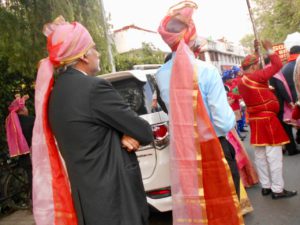 BOLLYWOOD IS ALIVE AND WELL IN DELHI AND SO ARE RITUALS 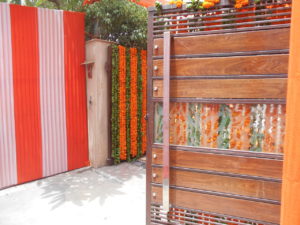 With the drop-dead dry weather, most events, even the actual wedding, were outdoors. A few rituals and cocktail events were held in the front garden of my hosts’ huge 5-storey home. Every inch had been decorated in marvelous, India-bright striped and draped fabrics. 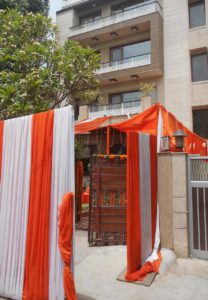 The at-home rituals for the future groom had me spell-bound by its colors and the great enjoyment of those present.

Many of the rituals are thousands of years old. For the bride, those were at her home with her friends and family. There are far too many to describe but an important ritual, well before the wedding, a Muhurta, is called to read their horoscopes for the perfect time and date of the marriage. (Patience, dear readers).

Tikka and Sagan, Sangeet, all traditions but I had waited patiently for the Mehndi ritual, that of having artists of that medium artfully apply henna, brilliantly designed, painted on my hands. But we would have to wait for the wedding day. 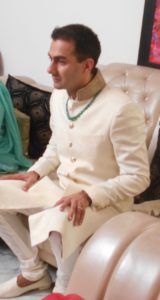 For the bride, the deeper the final colour after the powder has dried and rubbed off, the more it shows her love for the groom.

Just a day or two before the wedding, the Saint & Haldi ceremony was a surprise for me to observe. At his home surrounded by a group of friends and family, the groom to be, dressed in ordinary, casual cotton white, is brushed with turmeric, rosewater and an oil mixture and we were all invited to take part in brushing this paste on his face, hands, and body. It was great fun and also a ritual which is a purification and commitment to honor the marriage. I haven’t the faintest idea what the bride’s pre-wedding commitment ritual is.

Late one morning, Sehra Bandi was the gathering, again of family and the closest of friends at which their heads were wrapped, turban-like, in colours of pink to rose and orange organza, leaving a long portion hanging onto their backs. 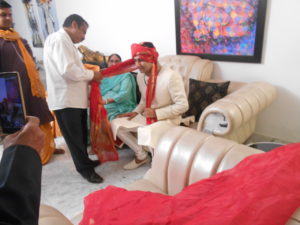 Well before the big day, there were already dance lessons being taught by a professional choreographer to a few young adults and the parents of the groom. The loud beat of the drums sent wonderful vibes to the Bollywoodish dance rehearsal, which was performed the next night on stage for all the guests. Phew, we’re not even near the end. This tradition has some underlying reason.

THE BARAAT AND NOW FOR THE FINALE. . . THE WEDDING DAY. 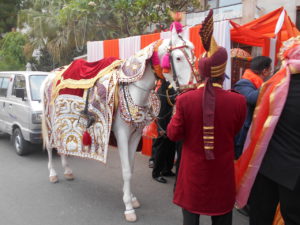 Who wouldn’t love the Baraat? A perfectly groomed pure white horse with golden saddle and reins, waited impatiently for the soon-to-be married man. This wonderful creature seemed bored. He had obviously been through this ceremony too many times. Now, in an elaborate white detailed with gold outfit, this already Bollywood gorgeous young man, mounted atop the exquisite animal guarded by a man in a most luxurious uniform made this an unimaginably stunning and memorable scene. 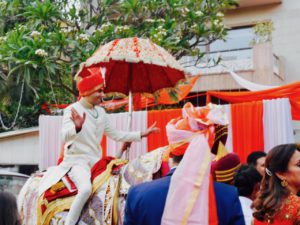 Guests had cars waiting to take us to the wedding venue, a posh hotel.  About 1/4 mile from there, the cars stopped.  It’s a tradition that you walk alongside the groom, who is atop the stallion. He, too, had cheated and had been driven to a drop-off stop where he got back onto the now very tired looking horse. Except there are exceptions, especially when the temperature is above 40c and this equine was wilting as were the guests who were accompanying him and the groom to the many sumptuously-designed, gauzy, burnt orange fine silk tents.

Now as the 500 guests entered, the outside fans went into high speed. Besides my now my totally numb feet, my new sari wouldn’t stay on my shoulders since I had no idea how to keep it there (later I was told about (ah!!) safety pins!!!).The guests danced to the rhythm of non-stop loud drums until the sun came up. 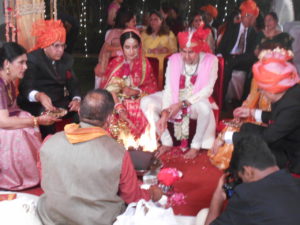 Perhaps the most important and truly interesting ritual occurred while hundreds danced and ate. About two dozen guests sat around a fire, as I did, for the prayers that followed. That’s where the newlyweds recited their vows and walked around the flames 7 times.

Also, the bride who originally was dressed in a heavily embroidered, non traditional wide skinned, midriff length top and matching shawl in dark blue, had changed into another hand embroidered stunning red ensemble. 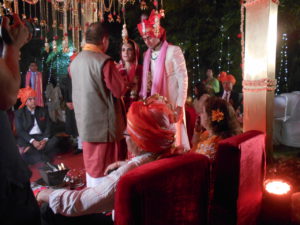 Indians love their food so, along with long buffets, multi food stations, and numerous servers, there was both local and international food choices. These offerings weren’t taken lightly since only the very best is expected. It’s like the clothing and jewelry. Those bejewelled and dressed like glorious film stars and the quality of the food are the topics most discussed the day after.

IT DOESN’T GET BETTER THAN THIS. . . SO FABULOUS 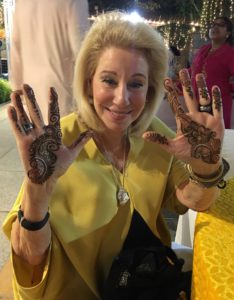 Guests from New York, London, Vancouver, Dubai, South Africa, were as overjoyed and enthralled with this imaginative extravaganza as I was. And I thought I was jaded and not too much could impress me any longer. Wrong. I also had my special souvenir, my hennaed hands which stayed that way until I arrived home a few days later. The knowledgeable customs officer asked, “were you at a wedding” as he looked at my passport and now fading “mehndi”.

THE GOOD, BAD AND MARVELOUS

India is monumental when it comes to variety in the country; a country where the bad turns to good, the good to excellent. 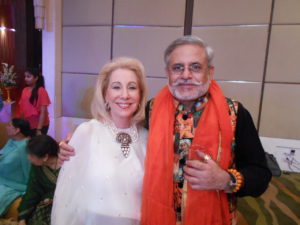 And every time I leave I immediately start planning my next trip to the sub-continent. I liken this country to a patch-work quilt: a massive country where every State has its own colour, food, dialect, traditions and textures. The constant I have always experienced, is its ‘kindness to strangers’.

Just think of the only blonde Westerner in a gathering of 500 people, old, young, middle-aged, all dressed to the nines, with their gems bigger than eyeballs. So many of them came to speak to me, get me to dance and to eat, eat, eat. I love the country. I love the people. I love their enthusiasm for life and their dedication to their rituals, traditions, religions, and homeland.

In Delhi, I no longer feel like an outsider. Sure, I deplore the poverty of the city with its over 16 million people, but an ancient country, with many uneducated citizens, like India, now has a growing middle class due to its new worldwide status.

It is truly an incredible country.