Valencia, Spain is a small-ish city but with great suprises. None more than my meeting with one of the most talented, imaginative and important jewelry designers in Spain. Vincente Gracia is getting ready to leave for London where he will launch a book about his artistic jewelry designs. He is one of Spain’s true treasures, known as the jeweler of jewelers. Another jewel to add to Valencia. 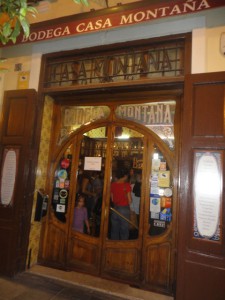 However, it will be somewhat of a rush, since he was still sitting with a client when I arrived and there are two more waiting to meet with him. But I didn’t mind waiting since it was truly a magnificent old palace. (In Spain’s heyday, palaces sprung up like the condos of today!)

Up the two curved flights of stair with the heavily carved railings, I was invited into one of the waiting rooms like no other I’ve seen. Vitrines, naturally, surrounded the room and were filled with tempting gems which have been made into exquisite objects. But it was his mastery of decor that had such a great edge that made me gasp. A gilded framed antique sofa has been recovered with a most unusually beautifully multi colored, most contemporary mixture of stripes and swirls.

Gracia, was born into jewelry since his father was one and Gracia recalls playing with the gem stones as though they were toys. And it was when he was in his teens that he decided that fire opals and blue turquoise (Le Bleu de Perse) were his favorite stones.

Although there were all the precious and semi precious stones, the turquoise is treated with the greatest honor, clean with not an imperfection but now designed with streaming hanging diamonds and ending with small rubies. There were many items featuring coral which works with all the other stones. Gracia sees all these as “routes of our country”. 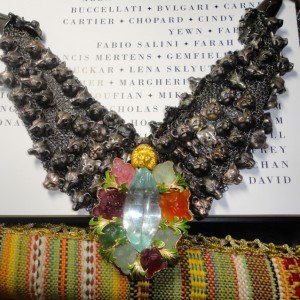 It is quite usual to see a gem -stone bird sitting on top a ring or another small animal set within a cluster of magically colored jewel settings and other objects placed in a gaggle of bewitching, colorful gems. Many of his designs include flowers, small animals and who wouldn’t want to have one of his huge cuff bracelets often including the unusual mixture of colors and even rough stones. It’s here that history meets the present day.

With his 14 craftsmen nearby who work as goldsmiths and the enameling is done in Barcelona, while many stones for Gracia are cut in Germany, and pearls come from the Orient, it’s no surprise that many of the gems come from India. All this leaves time for the casually, but perfectly turned out man, to concentrate on designing. 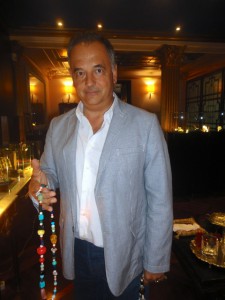 “I love the woman who wears my jewelry and realizes that there’s history and historic facts in each,” says this 60ish suave, gallant man, who doesn’t seem to be hurrying off or too concerned about getting to the airport and his plane to London.

“It’s so Spanish not to hurry but to make time for what seems important ,” he says as he fondles a wonderful heavily gem-encrusted neckpiece.

No only was this late afternoon meeting an experience and not knowing that when I walked into what seemed like a very modest entrance I would soon realize that this is more than just another shop as I started up a regal staircase. If only the walls could talk since this was once an ancient in-city palace. And suddenly I was aware but couldn’t fathom how people looked and lived in the old days of splendor of Spain. And then to meet a most charming man, his helpful son and be besotted with shining, stunning, original, one of a kind brooches, neckpieces, rings, bracelets and all things rare and splendid became my idea of a fine day in Valencia.