Canal Barging in France. So Easy, So Special.

When I mentioned to our friends that for our anniversary, my husband and I had decided to take an ultra deluxe French canal river barge trip on one of European Waterways’ barges, this one being, The Renaissance, within seconds, there was a pause in the conversation and almost in unison, eyebrows were raised. 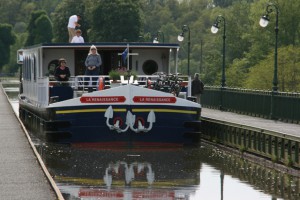 Didn’t we mean the larger, more exclusive river cruisers, was the first query.  Not quite the same, I explained.  One is larger and, of course, the barge is narrower and smaller,  but it has all the gastronomical highlights plus scenery of the little villages along the way. European Waterways is  a series of luxury, bespoke barges with up to 12 guests.  Cruisers are wider, larger with many more on board.  In our case, we were only 6  guest traveling in a most lavish style with all -inclusive amenities, including the local wines
, personal service, visiting historic treasures and best of all, floating through the Loire country through little areas, one aptly name, Little Venice.  The Renaissance, turned out to be exactly what we wanted and needed..serenity, a slow pace, cruising  gently and being tended to as the royal French families were before they lost their throne and a few beheaded.

The first indication that this was well organized was the synchronized pick ups for several of the European Waterways barges, at the posh Westminster Hotel and where we stayed for a few days post trip.  Located on the rue de la Pais, a stone’s throw from  the famed Place Vendome, it confirmed their renown reputation that, indeed, it is a great hotel.

Into a small van, the six of us quickly became friendly as we passed the truly unknown and lush valleys and farms of a very green France.  To get to the barge was about 1 hour and a bit.

Once cargo vessels, about 30 years ago, these barges were bought and cleverly and lovingly remodeled into floating five star boutique hotels. The Renaissance, was refitted again in 2009, and although it does accommodate 8 guests, we three couples, one from UK, the other from ‘down under’ and we Canadians, were treated in great style but best of all, it proved to be a wonderful mix of intelligent, amusing and interesting conversations. 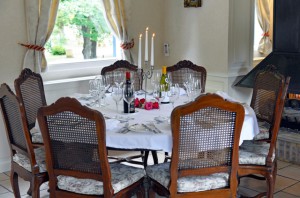 There was no pressure to dress for dinners, however, we did all mange ‘to wash up well’ and look spiffy in our casual chic ensembles as we sat around the formally set round table each evening and where the creative staff turned and twisted napkin into works of art.  It was perfect for the our meals since Chef Ollie, although English, is as French with his cuisine as possible.  Each was a true repast with the super, innovative  menus.

The mode was slow and easy.  Take a walk, use the available bikes where you could meet at the next stop.  No need to rush off into as crowded lobby to line up for tours as they must in the large cruisers.  Yes, in this case, smaller is much better.

The first day was so note- worthy as we entered our first lock (en Francaise..ecluses) of many more we would see. We watched the water elevate while the next went down.  There were several of these experiences and none of us took these for granted. 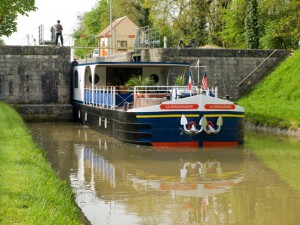 In fact, the navigation had to be so very precise since one could actually touch the sides of the narrow canals, only inches away so that Captain Laurent was totally dedicated and never distracted, never leaving the Wheel House.

Our traveling companions,  with completely different personalities, were delightfully interesting although even with their diverse interests, we all seemed to enjoy our time.

Pam and Ian are from Australia, living near the capital, Canberra, where this talent woman has 35 goats from which she weaves the finest cashmere items.  Ian, her husband, is a walking encyclopedia, a professor of geology. Londoners, Anne and Peter a most urbane, sophisticated, well traveled couple had taken several European Waterway barges, from the smallest to the largest and like them all.  But push come to shove, they did admit, The Renaissance, was their special water barge.  As we all did, we appreciated the spacious suites, the 5 star food, the staff, captain, activities, routes and decor.

With the wood paneling, a great choice of upholstering, this was the fine lounge for dining and not over the top French frou frou. 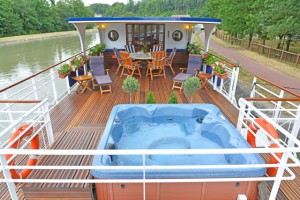 The deck, though not large, was where we could layback and watch the  glorious scenery  and take or leave it, we had options for activities each day which we discussed as we dibbled on our buffet breakfast which had one with the great varieties of food.  Chef Ollie had been to the town or village where we had stopped for the night to get the freshest, tastes breads, croissant a, fruit, fish and meat..

My favorite stop had been on my priority list for the longest time.  Chateau Fontainebleau, was one of the most beautiful palaces I’ve seen and kept in the most impeccable state.  Luckily, since it’s not on the main stream of most visitor’s itinerary, it was easy to move through the wondrous halls and rooms and get a close look at the furniture, objets and drapery.

After that viewing,we all met at a small and I think the only cafe and while I opted for a great cup of coffee. A few of the others had been told about the famous ice cream parlor next door and came back to the table with the creamiest and I’m told, the best ice cream they’ve ever eaten. 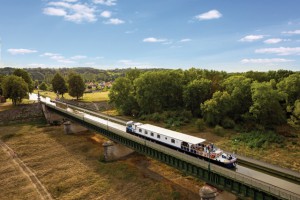 Another exciting highlight was so very special.  Pont-Canal in Briare, a sweet town if ever there was one, has a most unusual canal designed by Gustave Eiffel (circa 1895) of Eiffel Tower fame.  This aqueduct or bridge was an elevated canal across the Loire River below.  Imagine being on an  canal over a river below.

There were other visits to privately owned manors, a very quirky chalet with a moat, a visit to a morning market that sold everything in the village of Gien, known for their fine china and porcelain, also has the best cheese and bread  and  fine small, clothing boutiques. 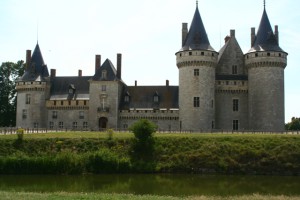 While in Briare, the other five opted to go to an ancient castle, Sully-sur-Loire, a medieval fortress. One of its clam to fame is that Jeanne d’Arc came to visit on many occasions.  I decided to walk through the streets of the small  town.  Over my years of  travel writing I had seen several castles. In this lovely, tiny village, I met a few locals as I sipped coffee at an out door cafe.  There wasn’t one person who didn’t say ‘bonjour’ when I passed.  I also took the opportunity to have my hair washed and blown dry and what a surprise to find an extremely modern and amazingly good salon.  Henrietta decided she would ‘do’ by hair.

Small French towns have a tendency not to take themselves too seriously and instead of snobbery as seen in Paris, here they were so pleased  to help out a stranger.  Feeling very tired, and it must have shown since  I was offered and accepted a ride back to the barge for which I was so grateful.  Merci monsieur. 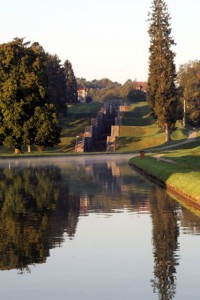 Anyone who loves new experiences and has dreams of locks, as my husband I did, were beside ourselves when the Captain suggested we take a turn at the helm.  That said, the Captain never took his eyes off us.  The locks are so narrow that the slightest wrong movement would hit one of the sides.

Along the way, my two women companions seemed to know the names of many of the trees that line the sides of the canals.  The foliage is lush and grand. And I learned, never thinking about it before, that mistletoe is a parasite and transferred from on tree to another, by birds.

And how can you talk about the French and not discuss food and wine. Chef Ollie made each meal a true repast with super, innovative platters.

The much looked forward Captain’s dinner included white Chablis, red Infant Jesus, to go with Fois Gras with fried bread and port reduction, cured salmon with capers and cornichons, a splendid trio of lamb (slowly cooked shoulder, roasted rack and fillet), with dauphinoise  potatoes.  No meal went without a fine cheese tray ..St. Maure de Touraine, Epoisses,Roquefort ending with an amazing creme brûlée. Since many of the cheeses aren’t pasteurized it’s difficult to find them in North America. 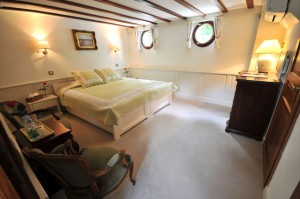 And the accommodations?  What a surprise when we saw our suite, Hugo.  There are only four suites, all very similar. They compare well with many of Paris’ five star, small hotels.  The closet was too large for our clothing, the opposite for me since I do have the tendency to pack more than I need.  There was also space for our empty luggage.  Two chairs and a dresser made up the rest of the furniture  As for the bathrooms, it was large with most ample shower, sink and counter space while the loo was on an elevated area.  Perfection from beginning to end, no pun intended.

One evening we were taken to Auberge des Templiers, Les Bezards, one hour from Paris, set in a glorious park with a Relais Chateau rated hotel and known for their one star Michelin Guide restaurant where we ate our dinner.  Foie Gras confit et grille Figues was a great introduction.  My choice was Canard de Challans and unfortunately it was  neither tender or had a crisp skin.  As was forgiven when the pre-ordered soufflé Rothschild et Glace a la Gousse de Vanille was served.  That said, Chef Ollie need not worry as his meal, e.g.beef from Charolais cows was beyond any meal on the trip.

Another opportunity for activities was wine tasting.  I can’t recall a trip that had something for everyone from the finest wine, cheeses, meals to the supreme comfort level.  No wonder many guests return.  Noting seemed to be left to the imagination.  It had all been though out for us.

ABOUT: Renaissance accommodates up to eight passengers in ultimate luxury. Her interior has been extensively refitted and includes a beautifully appointed and spacious lounge area with comfortable seating. The extremely generous accommodation features four suites, each at least 260 sq.ft. including a large private bathroom. Renaissance’s other impressive features include a forward deck with a roof extension for alfresco dining and an on-deck heated spa pool. For more information please see: http://www.gobarging.com/renaissance-…