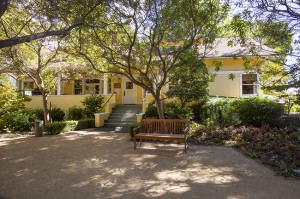 Not having a photo or description other than I was to meet the wildly successful ,former chair of Walt Disney Television and Telecommunications, the head of Disney’s syndication’s arm of Buena Vista, President of Walt Disney Studios and I can keep on with his leadership of such properties as TVs Cheers, Taxi, Entertainment Entertainment Tonight, Golden Girls and everyone’s favourite, movie Pretty Woman, also winning an Honorary Doctorate degree from the American Film Institute along with Helen Mirren and Spike Lee.,

As I looked around the bar area of one of the Toronto’s upscale, downtown hotels I didn’t see a prototypical Hollywood mogul anywhere. Not an unlit cigar in sight. 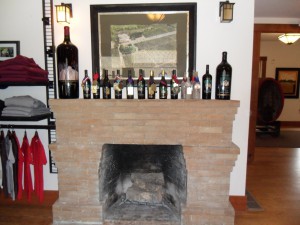 Brooklyn born, Rich Frank, is probably known by all the top people in the world of actors, directors and producers, but i was there for another reason, his famed winery. As he says,“all my time is now spent on the vineyard”. However, even though he tries to convince his friends that he’s retired from the film/TV life, I had jusI learned that he is executive production of,Royal Pains. 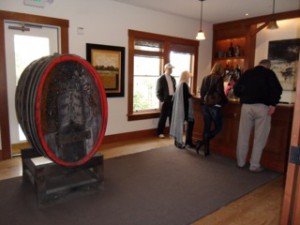 The hostess, seeing my lost look, knew whom I was to meet and casually drinking some white wine, I met Rich Frank, a man in a plaid shirt, great burgundy cardigan, teamed with khaki pants, the most glorious pair of brown tasselled leather shoes and and dare I say, yes with socks. He didn’t look Hollywood-ish, instead,a smartly attired guest at this swanky hotel bar drinking what turned out to be his favourite whiteChardonnay from Napa Valley’s, Frank Family Winery. 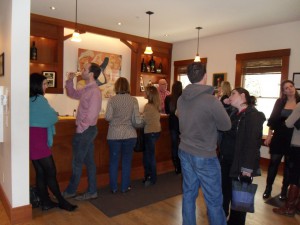 Napa Valley is known for its wines. But few neo -oneaphiles may have missed one of the best and highly rated wineries.

Frank Family Boutique Vineyards, just outside of Napa and certainly known to serious wine lovers, has the world rushing to purchase their incredible successful outputs from white (but no Sauvignon Blanc) to the reds (but no Merlot). 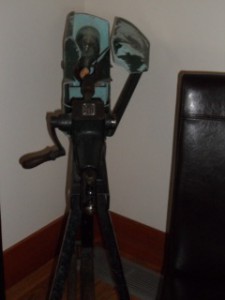 However, the master of the 230 acres area has his likes and dislikes. Perhaps this is way he was such a great success in his previous time/extensive career. During his high pressure job,
Mr. Frank decided to buy a weekend house in Napa as a getaway from Los Angeles 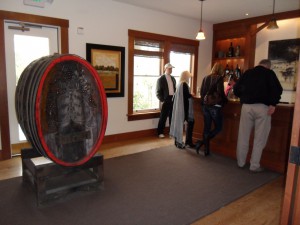 It’s difficult to live in Napa and not get the wine ‘bug’ which needed the same productivity and creativity that made him famous at Disney and made him realize that he had to surround himself with the best possible and knowledgeable wine makers.

So how was I so fortunate to get this interview? A few years ago, a mutual friend suggested while my husband and I were in Napa Valley, California, that we visit Frank Family Vineyards. I didn’t know Mr.Frank’s background and it really didn’t matter since he wasn’t at the winery that day.But we did get the royal tour and of course,couldn’t resist purchases some of the best Frank Family Reserve red wine. The once considered small boutique winery, is now a big player in major wine publications and regarded as one of the best in the world. 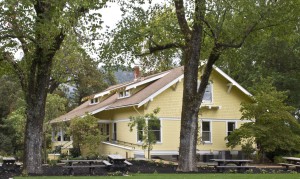 The history of the building where we met, would make a great TV series. A winery located in the 1884 Larkmead Winery and the 3rd oldest building in Napa. Since then there have been several renovations especially one in 2008 , the year that Frank Family had its first grape crush’ on the property.

Now the Frank Family Vineyard’s tasting room in yellow Craftsman house, is the centre of attraction and usually mobbed by the in-the -know wine drinkers who take tasting very seriously at the various wineries in Napa . It would have been a great backdrop for TV’s, “Cheers”.

His need for time-out from the high and busy life of a magnate started him in a most unexpected path from La La land when he found an ideal 380 acre land in Napa. Certainly the last thing on his mind was becoming the producer, this time with wines especially of the great calibre he has reached. All are highly rated. Chardonnay, Cabernet Sauvignon,Zinfandel and Pinot Noir, are all nationally distributed. 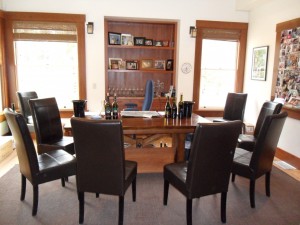 “The winery has grown so much in the last couple of years,” says the understated Mr. Frank.Toronto was last on their list of cities for interviews and tastings. There was Calgary, then Edmonton and now Toronto, the last stop before heading back to Napa

Changing careers wasn’t capricious. “I just drifted into this property in 1990 I was still working at Disney, 7 days a week and I needed the occasional long weekend away from Los Angeles and this destination was not too far. So I did what I always do when I’m relaxing, I read the paper and saw a property for sale that sounded good,” he says. This is a 1930, Tudor designed stone house on a hillside property with a few small vineyards which once was know for great wines. The property is now called. Winston Hill. 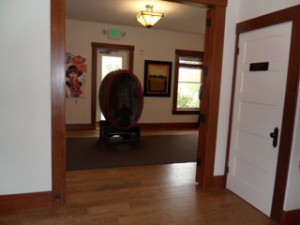 “The bank had to sell off this property in a bankruptcy sale. I made a bid and got it,” and laughingly says, “did I know any thing about wineries ? No, but I had been living here on an off for a few years and my friends said they’d be here to help.”

The start-up was 20 cases which he would give to my friends at Christmas . Now, Mr. Frank is really laughing, “Now we are making in excess of 100,000 cases. 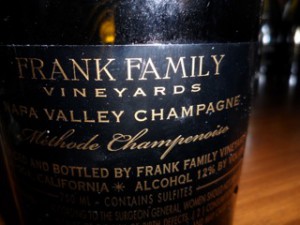 Their Reserve wines, a few bottles which we purchased after our tasting in their busy tasting room, was so impressive that our very wine knowledgeable dinner guests almost swooned as their taste buds blossomed.

The Reserve Cabernet Sauvignon and Reserve Sangiovese just happen to be from his home’s hillside, in Rutherford.

Enter Leslie Frank, his wife who was born in Hamilton, Ontario. A most striking woman, dressed very casually in jeans,white silk shirt and leather jacket, had been an award winning anchor and TV personality for 26 years years. Mrs. Frank, who has been living in the USA for 15 years, will soon be a dual citizen. These days she is a most informed, very involved partner and is easily the spokesperson of Frank Family Vineyard. “We made a conscious decision to concentrate on the winery which has doubled in production in the last two years and requires our full time attention so I gave up my work as did Rich.”(Well, almost!)

Mrs. Frank, is totally involved in all the travels, constantly promoting the wines and successfully expanding the brand. “We’ve been very fortunate that where ever we’ve taken the wine, it has been well received,” says the very svelte woman who looks like the most unlikely vineyard owner, but more model/anchor woman. “I always liked wine but I will credit all my knowledge to my husband and our wine maker Todd Graff ,who has kept me involved in the wine making and we always sit down and taste before we bottle. Ultimately, it’s up to Rich for the final decision.”

But getting their wine into Ontario, as most of us know, is costly and is almost as difficult as getting into Fort Knox.

“You have to go through the LCBO but can be ordered through our agent,” says the distinguished, articulate man. “In Ontario there’s 100% tax which makes our wine extremely pricey. In Alberta, it’s only 3.50% but in British Columbia it hits a real high of 120% due to it’s being so close and competing with Napa California.””
“
“We’re now in Singapore and South Korea/ We only make one white, Chardonnay, three Cabernet, two Pinot, 2 Zinfandel and a petite Shiraz. We are known for our cabernet”, says the charming Mrs. Frank

As for developing a palate, Mr. Frank says that you “have to have a good palate for the wine making side of it. I don’t believe I have that but my wine maker, Todd Graff, has. There are super tasters that have supposedly more taste buds than we have. But I believe the more you taste wine, the more sophisticated your palate gets. It’s like when I made movies, the more you do, the more you understand. And with wine you get to know what you like and don’t like. I can’t put out a wine that we don’t enjoy. The winery represents our collective appreciation of the wines we are putting out and if the public likes it, we’ll be more successful. I can’t try to guess the wine anyone would like.”

After the last sip of Chardonnay, (his, of course), Mr. and Mrs. Frank, they still seemed somewhat surprised at their an unexpected phenomenon. It ‘s much like making a ‘sleeper” movie that becomes an overnight success.