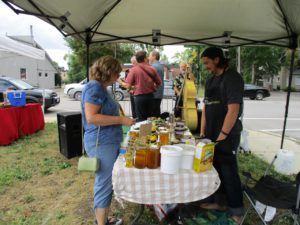 At the theatre, my seat neighbour asked where I was from. “Toronto and you”, I asked my friendly inquirer.

Her answer startled me. “Tottenham, Have you ever been there?”

I knew about UK’s, Tottenham Hotspurs Soccer team, but hadn’t ever heard that we had a Tottenham in Ontario. Realizing that she couldn’t be expounding about the soccer team, this peaked my interest.

Turns out it’s a town of about 5,000 population in the county of Simcoe, the south central part of Ontario and named after Alexander Totten, the first postmaster of the small community. 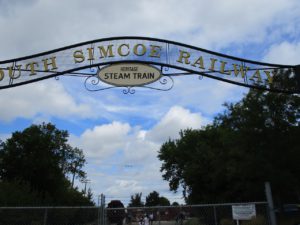 An easy 1 hour and a bit drive from Toronto, this great day trip is a no-brainer. Besides, my anonymous acquaintance caught me from the word ‘steam train’.

I love trains and have written about all types that I have taken around the world. 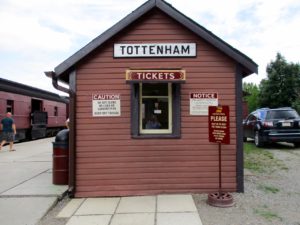 Tottenham’s steam train started in the 19th century and at that time was a most important means of transportation since horses, horse- pulled carriages or walking, were the alternatives. 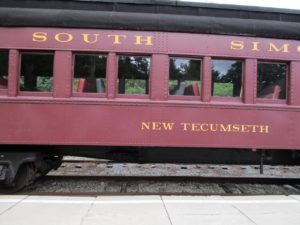 Although, these original cars from the 20s, were finished in mahogany, after years of having paint covering this wonderful wood, the restoration took several years.Its original beauty has been restored. Old century charm continues with the chained wood sticks which hold up the windows and then there are the loud bells and toots, at each of the five crossings.

Faces of the passengers of all ages, made me realize that the child in us never disappears. 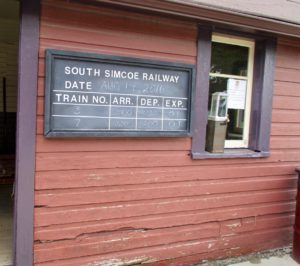 On the day we took the ride, the engine was diesel not the old steam engine, built in 1883, which only now runs occasionally. This didn’t hamper the ride to Beeton, enhanced by Vaughan, a volunteer,(as are all staff), who gave the entire history of this train. The 6.3KM (4 mile), hour return trip, is for people, like myself, who want to try this bit of history.

“Then, trains carried mail and parcels delivered within one day. Think about our situation today,” Vaughan explained. “Now it takes about three days for mail to land in your mailbox. Have we advanced?”

South Simcoe Railway also has magical occasions during Easter, Halloween ghost train and Santa gets his hour of fame with the Santa Express (check for seasonal treats and reservations)

Ontario’s scenery rangers from residential gardens, some with pools, to heavy foliage which becomes a colourful palette during autumn

And Vaughn pointed out the overhead bridge the CP train travelled, With tongue-in-cheekVaughab mentioned “the grand Beeton Creek”, (really a small brown-water stream), A giggle to add to an interesting and fun filled day.