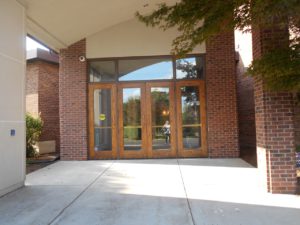 Perhaps because Temple Beth El, a Conservative synagogue, looks small, it could be that it sits on 7 acres or prime real estate in an upper, middle class and attractive area of Rochester. And they are celebrating their 100th anniversary this year, 2016.

Walking from the rear parking area, to the front entrance, there are voices of children of different ages. It’s late Friday afternoon and there’s a flurry to get seats and tables ready for the evening prayers and dinner afterwards. Also, since it’s been such a fine summer, it was decided that the services should be held in the flag stoned garden off the lobby. 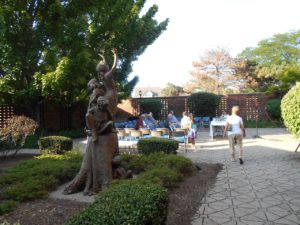 This seemed to be opened to disagreement since the heat may be unbearable for many. But then, someone had to make a decision and the outdoors won. This pot luck meal isn’t a singular annual event but often the Shabbat dinners are served after prayers as well, and at times, lunch, too.

Taking time out of her busy schedule, the executive director, Debbie Zeger, walks us to her office past vitrines filled with mostly silver Jewish artifacts. Originally from Queens, New York, when she married a man from Rochester, she moved to this northern NY States and has been with Temple Beth El for 27 years. 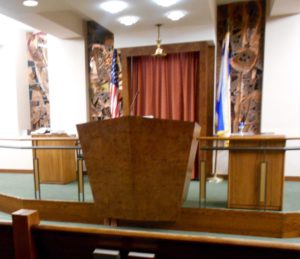 The Jewish population is about 20,000 and approximately 730 household are congregants. Temple Beth El is the largest Conservative synagogue here, but the Reformed synagogues are larger and the Orthodox synagogue is smaller.
Even with this somewhat small community, there two minyans daily, they have a nursery and religious school for girls (ORA), plus they are revamping their education system for High School students after their English schooling, on Wednesday and Sunday, where there won’t be any desks but pillows and bean bags “so there’s more of a camp-like feeling and fun”, says Mrs. Zeger. Although very traditional, Temple Beth El must be doing everything right since younger families are starting to attend services intermixing with the older generation who have been attending for decades. 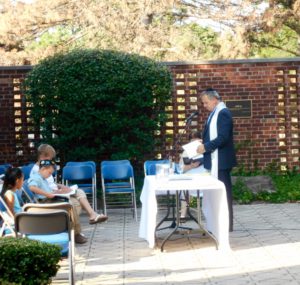 From the hallway, I see the rabbi and a few seated members already in the garden. It’s early but the rabbi is behind the table which acts as a bimah for the night services. For three years the adored Chilean-born rabbi has been in Rochester after spending time at synagogues in Detroit and San Antonio. As for Bar and Bat Mitzvahs. the rabbi and an associate prepares the children.

Another ‘must do’ on Mrs Zeger’s list is to obtain the history of the number of torahs they have and where they got them.
The chapel is small seating only 100 people and avoids being too opulent, opting for a simple decor. The larger space is more adorned with a very interesting bimah and stained class windows. “We are refurbishing the sanctuary. The seats are 50 years old and certainly need re upholstering.” 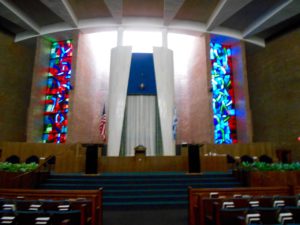 What makes Temple Beth El so progressive is their attitude to those with alternative lifestyles and going against the Talmudic grain, encouraging Lesbians, Homosexuals, Bi and Trans sexual, same sex married couples, to join and are made to feel welcomed.The rabbi believes in the ‘WOW’ factor.

This has certainly been observed throughout the year. “For Purim we had a, Star War, format,” Mrs Zeger tells me. Last year we had an acrobatic group. For Chanukah since it was getting stall, we hired a DJ for the music.” 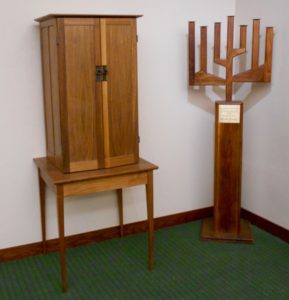 To show how on the mark they are, there was a most successful beer tasting with a beer called, HE BREW. Beer apparently, doesn’t have to be Kosher,”since they aren’t made with grapes”, I’m told when I asked. Trying to keep up with the times they also now have at Passover, a second seder and over 200 members show up. “It’s amazed us that so many were interested in a 2nd seder. There are kosher food restaurants that cater and some volunteer and make some dishes,” Mrs. Z tells me..

Then addressing other issues, there’s a bus for the elderly and for those with disabilities.

“We are trying to actually be more inclusive. We have to be relevant. We have a baby sitter, for the little ones and an area where they can be entertained during services,” Mrs.Z proud of the accomplishments. 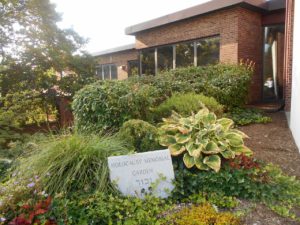 “And in the revamping plans, it has been decided, that there will be an area for the kids so they could be part of the services when they want to,” states Mrs Zeger. clearly enjoyed her role.

WOW factor, indeed. Temple Beth El certainly is far and away ahead of their time in their relevance for all Jews.