Fate is an unexpected and often exciting happening. I was lunching with my long time Hong Kong friend, Patsy, an executive at the Kowloon Shangri-la Hotel where I stay when I’m in that part of the world. During our conversation, I happened to mention that one of my writing interests that I really enjoy, is discovering and writing about Jewish communities around the world.

She stopped mid sentence, stared at me and then in a most incredulous tone, asked if I knew about the synagogue next door. After years of my staying at this uber grand hotel, I learned that on the second floor of a small mall just metres away, was the Orthodox Sephardic, Kehilat Zion Hechal Ezra Synagogue. 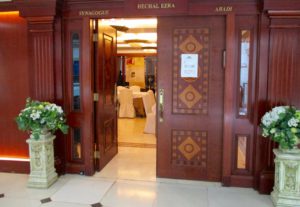 Kowloon? synagogue?? I had lived on the island of Hong Kong, just a Star Ferry ride away from Kowloon’s Tsim Sha Tsui and I certainly knew about the largest and most important famed Ohel Leah Synagogue. However, I feel excused since Hechal Ezra Synagogue (as it is known) was opened in 1995 and that was about the time we were ready to return to Canada.

Immediately after have the best (non kosher) Chinese lunch, from the hotel’s soon to be released Summer menu at the award winning, Shang Palace Restaurant , within minutes, loo and behold…there on the second floor, was a three room establishment that included a Glatt kosher, Kashrut Lamehadrin restaurant, Mul Hayam under the supervision of Rabbi Meoded. 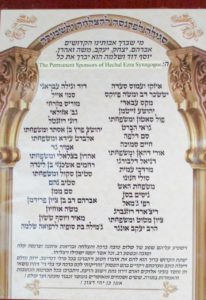 Rabbi Meoded was out. So, a most pleasant, young woman, from the Philippines, agreed proudly to show me the establishment. She had been working at Hechal Ezra for five years. She was anxious to point out certain items that I may have missed. None was extra special, but to her innocent eyes, every book and memorabilia, were valuable assets. 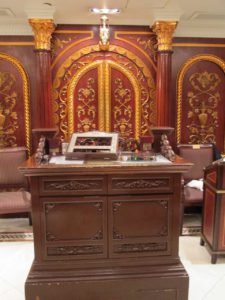 Yes, there is a small bimah and a few torahs. She didn’t know the how many might be behind a well preserved, heavily embroidered curtain while nearby tables were piled high with books, others preserved behind glassed -in shelves with a few piece of memorabilia.

Thinking that no one but the clean-up staff was still there in this hot, middle of the afternoon, I was surprised to hear a conversation from the adjoining room. Two Americans, lingering after lunch, and this being Kowloon/Hong Kong, of course, they were talking business. Meanwhile, the other tables that had been occupied during lunch, were being wiped and cleaned getting ready for dinner. It had been a busy lunch. A major plus is that the restaurant caters to tourists and locals and even has a service where they will prepare frozen kosher meals for take-away.

I asked and received a very varied menu. No one could go away feeling less than stuffed choosing from this four page menu. Meals from Chinese, to International , Moroccan and Yiddish dishes were available. Even the most sophisticated kosher palate would enjoy the offerings. 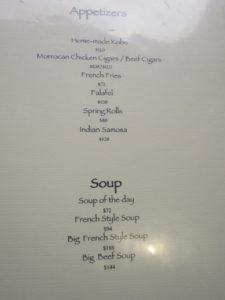 From one of the many curtained windows, just across the road is the new conveniently located MTR, (the subway) which makes a most efficient and well located centre from about anywhere in Kowloon or Kong island, making both the synagogue and eatery a very accessible destinationfor those wanting kosher meals. 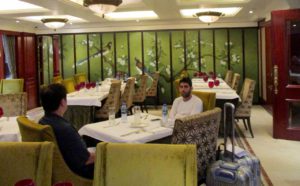 Although the young woman couldn’t recall the last time, if ever, there was a wedding, she did remember there was once one bar mitzvah. In fact, I had to explain what a Bar Mitzvah was and then she recalled one celebration that sounded as I had described。

Taking a chair, moving it out of the synagogue area, another young, non Jewish, assistant, had brought her home made meal far enough away from the kosher kitchen.

The Hechal Ezra Orthodox Sephardic prayer hall, is the sort of venue I adore. .. small, and ‘hamisch’.

This experience is only one of the reasons I love to travel. The unexpected whets my appetite. 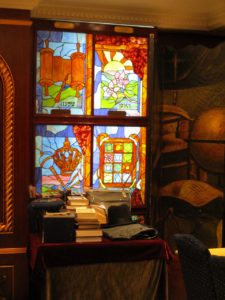 I enjoyed this unexpected visit and viewing noticeable respect for this quant but fine synagogue where on the high holidays, the room is packed due mainly to the Shangri-La Hotel’sguests and locals in the area, wanting some Jewish input.

It was one of the bright spots among many in this territory, where there is no anti semitism but respect for Jewish people who have become one of the textures of this diverse, quilt- like area in the world and where Jews found safety in cities like Shanghai during the WWW II. Many stayed and made a life in the territory often becoming successful professionals and business people and still retained their religious beliefs. Hechal Ezra Synagogue, has become their homeaway from their original home.

And to my surprise, this Orthodox Sephardic synagogue does have morning and evening minions each day.

Sunday to Friday,from noon to 10.30 pm, meals are available in the restaurant.

Friday night after Arvit and Saturday morning after Shacharit, the restaurant is open.