It’s hard to walk even a few metres in Istanbul, Turkey and not see a plethora of jewelry shops and stalls. Many shrug when the Grand Bazaar’s boutiques are mentioned. “Could be fake. Prices are too high. Don’t take chances, I hate bargaining,” are some of the comments I hear. But when push comes to shove (in the most literal sense) this covered ancient mall with 4000 shops, is probably the best starting point to see jewelry without fighting the juggernaut of this city’s traffic. 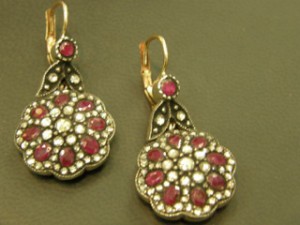 After seeing gold and more gold of every colour and karat plus a plethora of coloured precious and semi precious stones, I suddenly realized that I was witnessing a trend in the better, up market boutiques. Rose diamonds.

These hand cut stones were introduced as early as the 1500s but lost their popularity by the 1900s. Modern diamonds have 57-58 facets but rose cuts have 6 star facets meeting at a point at the top with 18 cross facets. They are also foiled back because of the absence of a pavilion. And the silver foil acts as a reflector. 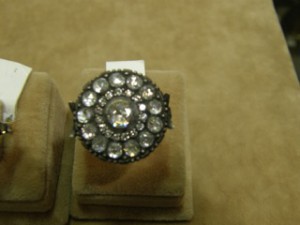 Early notes show that they were developed in Holland and much earlier in India however, the general feeling is that the latter is of lesser quality.

Because of the advent in the 18th century of machine made brilliant cut stones, the rose cut gems became obsolete. Another reason was that brilliant cuts have a high shine while the rose cuts have a soft romantic glow, smaller table, deeper pavilion, thicker girdle and high crown. As for the name, it resembles the petals of a rose therefore the appropriate moniker.

Kafkas, the first shop I visited, had a dazzling array of large rose cuts in their window. They have been in business for 55 years and now the 4th generation is involved. Both son and daughter were educated in the US, the daughter having gone to Wharton Business School and both have their GIA certificates. Speaking with general manager Fuat Kirgis, he told me that indeed, the rose diamonds are selling extremely well although he did emphasis that coloured stones are still very important especially dark and light blue since this represents the Eye that keeps evil away . But he continued that consumers are always looking for the newest fashion trends and rose cut diamonds, because of price and impact are certainly I the fore for newness, again.. 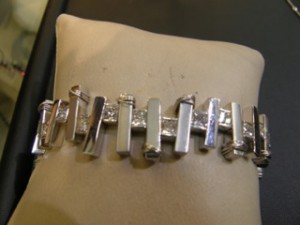 “We’re proud that 75% of our clients are locals who shop here and at our other 5 city shops,” he told me as he pulled some items from the vitrine. Most of the 25% are Americans. “We have 6 designers who are still at university but enjoy re-working the rose cut diamonds and making them into more contemporary designs.”

Each of Kafkas’ shops has the same merchandise. What sales best? “It’s still the big brilliant cut solitaire which we often mix with rose cut diamonds.”

They exhibit in Las Vegas and Hong Kong jewelry fairs and are proud that they sell to renowned American jewelry shop, Fred Leighton.

“We are trying to make this an international company.” As for style, the example is that two years ago chandelier earrings were huge sellers. Now is seems to be shifting to smaller earrings which often include rose cut diamonds.

He cites that celebrities like Cameron Diaz, Elizabeth Hurley and Sean Connery, as some of the notables who have shopped at Kafkas. I’m astounded when he shows me 4 1/2 karat pair of rose diamonds earrings that are $70,000US. They are wonderful but pricey. He explains, they are new rose cuts diamonds but in the old style, many copied from some of the jewelry seen in Topkapi Palace Museum.“The Ottoman style was with foil in the back and now we are opening the bottom for more brilliance. Most customers prefer the rose cut since they come from the same diamond mines but are so much less expensive than brilliant cut.”

White gold with diamond around 8 ½ carats make up a stunning crescent brooch. Although prices seem high, he’s not finding resistance to the price points since he says the stones are very clean, white and the workmanship is the finest. An example of the finest craftsmanship is that of a late relative. The scenario is that of Tokapi, the movie. Although permission was given to ‘shoot’ there, they were not allowed to use the real priceless daggers. He recalls how the shop’s original owner, the grandfather insisted he could replicate the dagger and in fact, when he showed it to the curator, it was so exact there was not notable difference.

At another shop, Muharrem & Hasan, has stones set with black rhodium since, it’s explained to me that gold is too soft for stones with the backing of silver foil.

But it’s somewhat of a riddle when I ask what sells best. The answer is t 22 carat gold and diamonds items. Rose diamonds are popular he also says. “We do sell brilliant cut but certainly the trend is towards rose cuts,” he echoes the sentiment of Kafkas. “Most of these stones retain the backing of foil.” He shows old rose gold rings with rose diamonds which haven’t lost their integrity to re-styling.

Off the in-market Jeweler Street, as it is known, is Levant Jeweler where most of the inventory is antique. Young and enthusiastic, Selcuk Koyluer tells me his opinions. “I can say for the local customer there’s a great interest on old style jewelry and have heard that it’s the same in the States. But often we take old stones and reset them into modern styles. Because of the interest of people the prices have gone sky high. The cut is different.”

“Rose diamonds is the oldest technology,” he continues. “At that time there wasn’t the same equipment as we have today. Now the stones are machine worked.”

However, there’s not doubt the craftsmen are making great pieces. He brings out several pieces especially rings and earrings. These are reset pieces from antiques but the style is still reminiscent of the traditional. Prices, here also, seem high. He also reiterates that they do have to oxidized the silver which is so much stronger than gold.

“Of course, we sell brilliant cut diamonds. We’re very aware of styling and follow all the world top designers.”

“We are not working only for big profits but truly believe in fair business. We want our customers to come back. If you overcharge they won’t come back. He too cites that 75% of his clientele are locals who then bring their relatives and friends “because they know we won’t overcharge or cheat.”What seems to amaze him is that the younger generation likes rose cut. And the solitaire is still the favourite. But tradition does win out when it comes to weddings. The diamond band with 5 stones, either brilliant or rose cut, is a must and no matter whether it’s brilliant or rose, a diamond parure is what each bride expects. 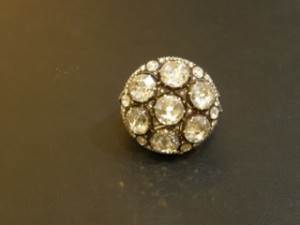 ‘Our biggest advantage in turkey is that we’re almost the first country that the rose cut has been set,” says Adam Kurtulmus of Jewels Edel. The family has been in the business for 44 years and Adam studied in Switzerland. He is 35 year old and is aware of the fashion forward trend. “You don’t see many of these in American. You may find them in antiquity stores but we have modernized them. I’m sure next year you’ll see many rose cut diamond collections.”

This shop also exhibits in Las Vegas and saw amazing results. “Next year we’ll be exhibiting under the Damra Collection. For the last three years there are wholesale companies in New York and Los Angeles that are buying from us.”

A 5 stone wedding band, each 1.75 karats rose cuts, VVS clarity is $3000 set in rose gold. “It’s really a piece of art. But we also have pieces which we mix with Burmese rubies and Columbia emeralds among the rose cuts

While walking through the beautiful lobby of the Four Seasons Hotel in Istanbul, the ‘street’ of shops naturally included several jewelry stores. Angora jewelry has its own factory and also realizes the 300 years old tradition of rose cut diamonds. Eighty percent are new rose cuts and are cut and polished in the Netherlands. But it’s the 20 % of old cuts that are taking over especially when they are in a modern setting.

We can only see prices rise as the popularity of rose cut diamonds seem to escalate.