After hairpin curves, a continuous cacophony of horns, narrowly hitting haphazardly roaming cows, seeing women carrying huge bundles of twigs on their heads, the roadside sameness of village stalls and unemployed men, we reach Bambora, the ancient capital of the Mewa kingdom.

From the steep dirt walkway, the strategically placed Karni Fort, in Bambora near Udaipur, looks like Hollywood’s idea of what a real fort should be with massive turrets, ramparts sitting on the highest point. This mammoth edifice was an outpost of the Sisodia Rajputs who resisted various invasions in the 16th century.

Recently restored, to its medieval opulence, as one of the staff carried my valise on his head while I dug in my sneaker heels to keep up with him during the long climb, I saw a sight which still seems unreal.

There below in the centre of a man made lake was a white marble Bala Diri (gazebo) with heaps of vibrantly coloured cushions. Inside, a visiting group of 6 Austrians eating either a very late lunch or a very early dinner, the buffet of traditional local edibles on the side of the pool being served by a turbaned waiter.

After climbing several staircases, we reached a narrow rampart and wall which led to my turreted room. Small, decorated in traditional Rajasthani brilliance of colour and carved dark furniture, I had the perfect view. From the bay window like area, I watched amazing sunrises and sunsets during my all too short stay. 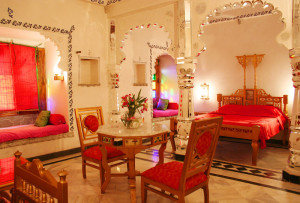 As the only occupant of the fort that evening, I felt very much the Maharani with several servants looking after my every wish. A site inspection of the other 30 air conditioned rooms included a few extremely large suites which were the former bedrooms of the royals. Some were decorated with the Rajasthan signature of mirrors set into the white plaster columns and gilded furniture.

It seemed a sensible and economical decision to have me in the smaller room since this wing would have meant heating the entire building.

Since most of the other establishments I visited were 100% full, I wondered why this immaculate heritage resort wasn’t, it being at the crossroads of so many interesting destinations in Rajashtan and near the hundreds of years old Jaisamand which is the largest man made lake in the region.

“It’s only been recently opened to the public,” I was told by yet another Mr. Singh. Just before leaving, he told me he had a surprise to show me. Behind a curtain over a cave-like entrance is a long tunnel with a few twists and turns to an exit. Every fort should have one.

By air the nearest airport is Udaipur. By road is connected from Udaipur.

Things to do. Visit Jaisamand Lake and Udaipur and Chittorgarh Fort.

Barbara Kingstone is a Toronto based travel journalist who writes for publications around the world.

AS  I  REPRESENT  INDIATOR, A INDIA-ONLY TRAVEL COMPANY  WITH THE MOST COMPETITIVE PRICES,  FLEXIBLE ITINERARIES AND BEST CONTACTS.  GET IN TOUCH WITH ME AT BARBARA3@ROGER.COM.