It’s a sunny hot Sunday morning in Berlin. Family brunches have taken off in once staid Berlin. Kids rush about, digging deep into the buffet pans without any instructions from their parents who all seem to be English speaking.

I’m waiting for Rabbi Joshua Spinner and lucky to get the last table at one of the two, side by side outdoor cafes. Pasternak, Gagarin are a hint of how many former USSR citizens now live here.

This suburb, Prenzlauer Berg, seems moderately up scale as I venture a guess from the expensive casual chic outfits. Besides, this is an expensive brunch for Berliners even though prices are at least 1/3 less then in similar areas in North America.,

While I wait, I leave my husband at the table so I could window shop at some of the retailers across the wide street.

But what really catches my attention is a building beside the cafe that has a barrier which prevent cars getting too close and an unobtrusive police car.

Out of curiousity, I read the plaque on the front. This says, The Ronald S. Lauder Foundation, headquarters in Europe in a building that has a Jewish school.

As it happens, we are waiting for the Executive Vice President and CEO, Rabbi Joshua Spinner. Since he and I had never met, I have no idea what he looked like. But his mother, Dr. Miriam, late father, Dr. Nachum and my husband are(were) psychiatrists at the well, known, Dept of Psychiatry, McMaster University, in Hamilton, Ontario.

However, since my husband commuted daily from Toronto, about 60 miles, on miserable freezing, icy winter days, he would stay over night at a hotel and the Spinners inevitably invited him for dinner so knew he would recognize Rabbi Spinner. The Spinner’s table talk was never about psychiatry, but about world and cultural events.

Rabbi Spinner fit perfectly into the ambience with a non chalant demeanour and looking right in place with the demographics. The only give away that he wasn’t a ‘cool guy’ was when he removed his cap, immediately replaced with a yarmulke.

Almost the first words he spoke after I commented on this, was “I always have my head covered.”

Another surprise was to hear that his office was in the brick building and Rabbi Spinner is the CEO and Executive vice president of The Ronald S. Lauder Foundation.

Spinner and his extended family are modern Orthodox Jews.

Born in the USA, Rabbi Spinner’s formative years were in Hamilton. He went to Yeshiva in Toronto for his rabbinical training.

This is a most distinguished family of professionals. His four siblings are either doctors or lawyers. But Rabbi Spinner took another road to success

Immediately, I became aware of how serious this affable man is and so passionate about his work.

After graduating from Columbia University in New York with a degree in history, Rabbi Spinner went to Minsk, Belarus where he worked, developing Jewish educational systems, and learned Russian in the two years he lived there.   Obviously, what ever the challenges, he was successful enough for Mr. Ronald Lauder, (younger son of the famous cosmetic doyenne, Estee Lauder. Mr. Lauder has many sides. He’s a most noted philanthropist and in 1987, was the American Ambassador to Austria. He has many other business interests such as publishing and head of the World Jewish Congress.)

At a most casual meeting, he asked Rabbi Spinner to work at the foundation in Berlin. At that time, 1997, thousands of Russian Jews were moving out of the former USSR to Berlin (hence the names of the cafes where we met) and knew little about their own heritage. It was a great opportunity for Rabbi Spinner to do what he wanted -to teach youths about being Jewish as well as ensue them a great education.

Not too long afterwards, he was made vice president. In Berlin, over 20,000 Russian Jews arrived not knowing much about Judaism but wanting to get that information and education. Rabbi Spinner had ideas of what he could suggest for the new immigrants. One function among many stood out -to support education for young Jews in many of the Eastern European countries.

I doubt if Rabbi Spinner would have ever moved to Berlin if this offer hadn’t been so enticing. The irony is that his father was a holocaust survivor.

Why this great flow into Germany? “It’s not an expensive city compared to many countries in Europe and has a very thriving hi tech industry. If you want to be in a ‘cool, hip’ city in Germany, it’s Berlin,” says the blue eyed man.

Berlin is again the capital city and the cost of living is less than many capital cities. Here one has the possibility of purchasing a home at a relatively low price.

“It’s a city that depends on support from the government,” says Spinner. “For instance, I don’t know what you’re paying for a room at The Adlon (this being a most magnificent high end hotel where we were staying) and a comparable room in Paris, as an example, would be 5 times that amount.

“There isn’t a strong tax base, he states,”  and it’s one of the reasons now we’re seeing large immigration from pricey Israel”.

He said the foundation offers financial aid to Jewish institutions. Preferably, the foundation likes to subsidize up to one third of the costs in partnership with the local authorities and the parents of the students.

His major commitment is making sure there is kindergarten and primary schooling for Jewish children.   His outreach organization now is so in demand, that parents sign up their newly born children so that they could reserve a space and its part of one of the many segments of Mr. Lauder’s empire. 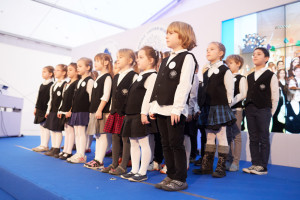 For example, when the first school opened in Berlin, there were 10 students. Now 155 are registered and hope is to accommodate 300 in the near future. The foundation is the largest private funder of Jewish education in central and eastern Europe, including Bulgaria etc.

As we continue to chat, it’s difficult to avoid discussing Jewish life. “There isn’t a Jewish quarter anymore. I’m part of a young orthodox community of about 75 families but we’re from different area in the city.

I look around the cafe and am not aware who is or isn’’t Jewish. Berlin may not look like a city with a soul, my personal feeling, but the future is as bright as the lights near the Brandenburg Gate and tourism is growing.