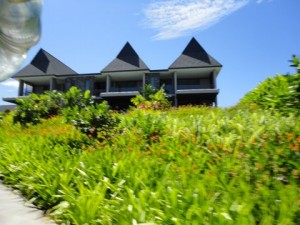 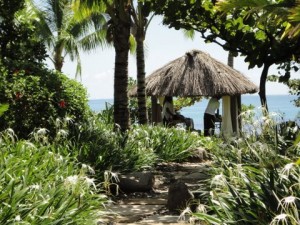 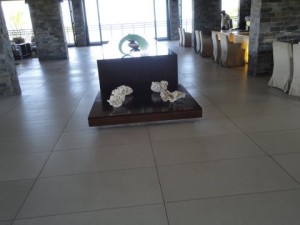 The late Hollywood actor, Raymond Burr, he of Perry Mason and Ironside fame, had two passions… Fiji and orchids. So when he moved from fast lane Hollywood to Fiji, with its own Fijian time, Burr brought 1450 orchids and started a craze for these now very prolific flowers seen throughout the island.

Fiji, in the South Pacific off the northeast coast of New Zealand and made up of 333 island, is what dreams are made of and if you just can’t take big city pace any longer, this may well be the place to settle. Many of the numerous islands, are still undeveloped and uninhabited. One learns quickly about the “treasures” of this island. From the start, learn the word Bula. This infectious  ‘hello’ is heard every time you pass someone.  This is, after all, “home to the world’s friendliest ” people. 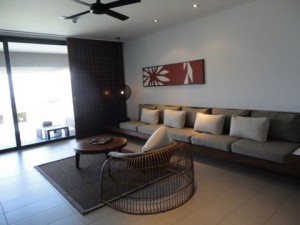 Part of a suite at the Intercontinental Hotel

It’s an island with many industries. Of course, tourism tops the list followed by the sugar industry. And there are many by-products from the 18 types of hardwood, 6 are indigenous. Also the flora and fauna is famous as is the custom of not wearing wedding bands opting instead for a flowers  behind their ears which tell their marital status. ..left side for  those still single and right side flower wearers have already wedded.  Although one time there was a chief who had 150 wives now it’s one wife, one husband.

Once, not that long ago, there was also cannibalism on the island and that has happily disappeared -no need for visitors  to worry about a hot pot.   And one of the best facts is Fijians are known for their longevity, probably due to their diet of fish and fruit.

“It’s impossible to go hungry here.  We have  a large variety of fish and many fruits like pineapples, mangoes, bananas and so much more agriculture and that’s there  for the taking.  Yes, there are poor people as there are everywhere, but hunger isn’t one of the major factors, ” says my authoritative guide, Ed. 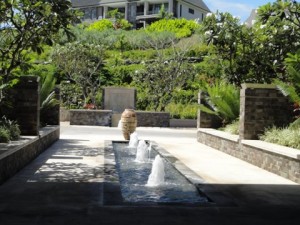 These days tourism is the largest industry with about 70,000 visiting each year with the goal of 100,000 annually. That shouldn’t be too difficult.  Just think of the bluest skies, warm with amazing hues of azure water,  white powdery sandy beaches wherever you look along the Coral Coast and people who are so friendly that it’s impossible to find any fault  with their eager and always present kindness.

Although sugar was once the important industry, with the introduction of sweet substitutes, it is now second to tourism.

Now back to the seaside. If water sports are your ‘thing’ then Fiji is the perfect destination. There’s snorkeling, scuba diving, sailing, surfing, fishing, kayaking, canoeing and more. 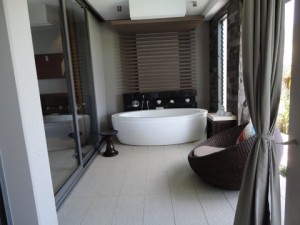 However, if you’re not  an ardent sportive type, there are other activities here, too.  For instance learning about fire walking, having hotels like Warwick Hotel prepare breakfast in the water with a mermaid on a settee handing out the  plates, how to tie the always brightly colored sarongs a dozen different ways, learning to crack open a coconut with a carved pointed thick branch, being invited into bures (huts) to watch pottery making, a most romantic getaway, and drinking the ceremonial welcoming cup of Kava (Yaqona), dating back before history was recorded. Suddenly with this drink you become family. And as Ed frequently issued forth, it’s all one big family on the island with a population of just under 1 million. What I learned is that family is most important.

“It’s better than being rich,” Ed tells me.  “So everyone who has been invited  into a Fijian village, managed drinking the cup of  Kava with the various clapping of hands at the correct time, is family.   As for kava, it’s made from the dried Waka root that has been cleaned, pounded  into a powder and then with added water (the less the stronger), it can numb the lips and in my case, the throat too, but to have refused would have been a great insult. 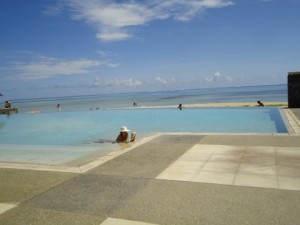 One of the Pools at the Intercontinental Hot

As for fire walking, one evening a crowd gathered to see this incredible happening.  Each of 8 strong, well built men, holding steel rods in their hands, pushed and shoved gigantic rocks and wooden planks into the correct position.  Then at the Chief’s command, they took turns walking on this searing bed of rocks.  The applause was greater for those men who stayed on these burning rocks longer than a few seconds.  Some pessimists in the crowd were convinced that they had too  many cups of Kava or had anesthetized their feet.

As a naïve, I believe it’s a well trained sport for the Beja tribe and also considering that  they don’t wear shoes, the callous build -up probably makes it possible to sustain the fiery rocks. 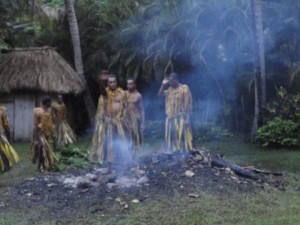 However, to be a fire walker, there are a few caveats.  First, is not eating coconuts before the event since they are considered an aphrodisiac, and the other is to stay away from women for two weeks.

Being invited into Nakabuta  Pottery Village/Sigatoka Town and becoming part of this family was an insight into Fijian life.  The women work in the house, look after the children and as we sat in a semi circle, listened to a most harmonious singing performance before a show and selling their handmade carving and jewelry.  As for singing, Ed states,  “it’s in our genes,”   as he too, begins to sing beautifully.

Religion is very important. The populations is made up of 55%  Christians, 37% Indians (Moslems and Hindus) and the rest are smaller religions But there is one common denominator…language.  Most speak English although there are 26 dialects.  And suddenly education has become a way of life for many young people, realizing that the smaller the family, the easier it is to afford schooling for their off-spring.  In the ‘old days’ having 15 siblings or more prevented many from learning to read and write due to schooling costs. 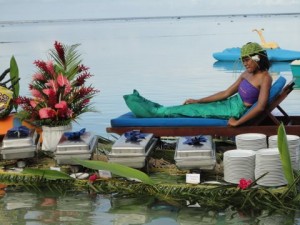 As I learned from my cab driver, Sam, a fifth generation Indian, there’s a sincere, true loyalty to the country. Like many other Indians with whom I spoke, there didn’t seem to be the need to go to India and learn about their heritage.  “I’m a Fijian and that’s that, “said the young driver.  “I have no need to go away from here in search of anything.  I have everything I want,” the30 year old with two children, tells me.  A major Rugby fan, (the national sport), Sundays are for watching the game and being with family.  He reminds me that in 1819 many Indians came to work on sugar plantations. With few intermarriages since marriages are often arranged, they have kept that Indian tradition.  Also back another is the sulu, the sensible below- the -knee skirts that men wear in this hot country.

How bored can one get by walking the beach, swimming, crawling thought the various caves, visiting Kula Eco Park, seeing ½ painted black faces and bodies of the fierce looking tribesmen who  successfully originally scared off invaders with these colorations. Also, the Coral Coast, along the Queen’s Highway (the northern section is called the King’s Highway)  can boast of fine hotels. 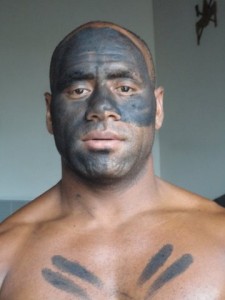 And certainly top of the  line is the new and exquisite Intercontinental Hotel and Resort with three pools, (one especially for the kiddies), another at the private Executive Club accommodations. And who could resist the outdoor ‘Cleopatra” bath tub with privacy curtaining and a full bottle of coconut bath suds?  Also the spa is grand with a fine menu of treatments especially the 90 minute ginger oil body massage.  But, it’s the architecture of this hotel that is so unique and original that it’s worthy of a visit to see the incredibly designed set of buildings that manage to keep some traditional aspect such as the shape of Fijian rooftops. Three words describe the Intercontinental…simple, modern and exquisite.

This hotel would be my choice stay after the long flight from Los Angeles on Air Pacific. Since the flight leaves after midnight, unbelievable as it may sound, the morning meal in Business Class, was excellent with a non plastic tasting omelet, very tasty sausages, a flaky croissant and fresh fruit.  Air attendants, however, made sure to look after any needs during the 11 hour flight.

During my stay in Fiji, thinking that this is another planet , the kindness, duty to family, gentle manners and the constant greetings,  Bula, are rare example of unique friendliness

How could one no fall in love with this island paradise among the flora and fauna, especially the orchids that seem to appear everywhere and on every table?  If only Raymond Burr could see his ‘flowering gift’, he would be delighted and even perhaps make a film about heaven on earth and call it Fiji. 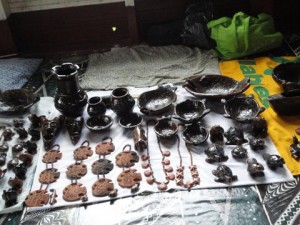 Wares shown at the Pottery Village