The TV show, Sex and the City, seemed to capture the audience and the sensual side of women of all ages. The episodes were about four young women who couldn’t live with a man but continued to hunt and hurt. Meanwhile, we four close friends, over our usual Saturday lunch, tried to find the solution to how to live without those of the male persuasion.

The TV role models were in the bloom of their lives, lithe, slim, sexy, while we were past our blossoming. Over sixty and how dare anyone call us senior citizens, was how we reacted when we’d read about auto insurance for aging, gated residences for the sixties and over. That image of grannies, grey hair and false teeth that don’t fit and visible gums sure didn’t fit us. 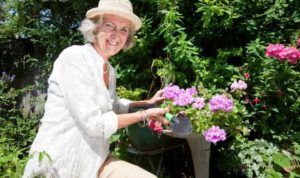 Taut from exercise classes, proven successful career women with some disposable income, we were well traveled and had various tryst with plastic surgery.

Yes, objectively, we looked so good that one evening at the smart Four Seasons Hotel dining room, a bottle of wine was sent to us by two elegant, European men, “only because you’re four beautiful women having a great laugh”, was how they put it. We were. Being the only one among the four still married, I became the guru since I could look at the situation from all sides. Having wedded young to a then medical intern, meant having to learn in the early days how to be happy and alone, raise the children who sometimes didn’t see dad for a few days. My pals were keen to acquire the skill of how to accept their new single statues, even though they now had to live solitary man-less lives.

In those days, our generation, now pushing seventy and over in some cases, getting married young meant all would be well and we’d be taken care of just like Cinderella.

However, the rules changed when the feminine revolution caught us off guard. So the smart ‘wives of’ became career oriented, some going back to school, others starting at the lowest rung but grasping for a career.

Those who took the easy way out and hung onto the MRS. title were destined, in many cases, for dependency and a major hazard when they became widows or lost out to the new trophy wives.

But we four thought we had managed our lives well, however, there were many times when depression, despair and utter bewilderment took hold of the three. Where were the answers to this conundrum.

Angela, a successful second generation spa owner, had become a young widow. Rachel, a former ad executive had won the very prestigious provincial award for her charitable works. Her husband, unknown to everyone, was depressed and suicided, leaving her startled and bereft. Sandra, a publisher, had left her second husband.

Now, all of them wanted a new start. But age and a few unfoldable wrinkles that even thebest cosmetic surgeon couldn’t remove, just weren’t compatible with their youthful dreams and mind-set. After all, who among us could deny the competition by younger women for men with a well balanced portfolio, no wife and acceptance in the community,thus often leaving Baby Boomers, Generation Xs and those older Boomers, at the startinggate.

As I sat one day thinking about the four of us, I realized that there were other friends and acquaintances who had made peace with their lifestyle and were having a grand time on their own terms, while others, some in their fifties, others in their sixties, in some cases seventies, still wanted and needed the admiration of a male and the sexual connection to feel complete. Not easy to find, was my flip conclusion. How would I cope, became the question. But I had good training.

When my travel writing career took off, I would spend a lot of time alone but I enjoyed what I was doing. And I never felt lonely. I like my own company. Every adventure just heightened the output of my endorphins. But I am lucky to have achieved this level of self dependency early on.

There are self help books and rules for teens and young, career orient women. There are the “how tos’, to develop skills, write resumes and get out there and break through the glass ceiling. And many of these post feminists used their sex appeal widely. But what about the years of acquiring wisdom, I thought, thinking about my talented friends. Long gone was their empty nester syndrome. Perhaps these grandmothers weren’t keen to become the doting baby-sitter for the grandkids.

My pals still wanted to feel sexy and admired. How could they be on their own and enjoy this time of their life without a man. That was the constant query. So many had tackled and succeeded in their quest of self. Others just became the depressed invisible woman, the fifth wheel, odd woman out, at social occasions.

For some, like Maria, her need to have the ‘other half’ was nice if it happened, however, at a certain time in her life, without just settling for any man, she had filled her time with alternatives.

Marcia had been married long ago and during the years, this public relations executive had her share of dynamite men in her life and bed. As much as she enjoyed their company, getting remarried had long since been her goal or an issue. The only regret wasthat she never had children. “So I started to love and care for my friends’ kids, my niecesand nephew gave me a new thrill. I don’t feel cheated now. I have a great infrastructure within my family and I’m never alone if I don’t want to be. I take courses at the university and my work keeps me as busy as possible.” (She has since married, seventy plus and happy beyond one’s dream). 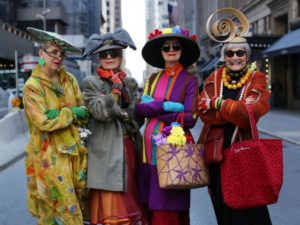 After listening and speaking with some successful and fulfilled women, I came away thinking that there are some easy steps for enjoying ones self after middle age (whatever that is these days).

1. Continuing studies at the university is a must for Dorothy. A former art gallery owner, now in her eighties and looking twenty years younger, she still has a passion for clothes, travel and learning. And she loves to play mahjong. “Any man interested in me would jut be too old,” she says with her flirtatious smile. She entertains often and reads voraciously. And if by some chance, there is a grande soiree that she wants to attend, her brother is always available. “but it’s my friends who are the greatest assets.” A great support system among women is a necessity.

2. Marilyn, a university professor, member of the Order of Canada, world renown in her field, a global lecturer, has a routine. In the summer it’s a month with her friends in Maine. One month every winter means renting an apartment in Florida where the children and grandchildren come for a week and then friends are happy to accept invitations to visit. During the other months, she’s fully occupied with being on various boards from theatres to hospitals and still doing some research at the university. Smart beautiful witty, the seventy something professor emeritus has learned that there are men friends who are more than happy to accompany her to a movie, concert or party. Although she’s quick to admit, few would be considered live in material. She exudes intelligence. She’s interested in almost every subject. I hate the word walker. It diminishes a decent man. So many of my ‘gay’ friends are professionals, have good positions and made damn good companions. There’s no competition and they often can talk about anything that is of interest. Look for a single gay or straight person who likes what you like. (She, too, has a most marvellous, successful, equally bright companion.)

3. Every issue from politics to theatre is part of her DNA. And the men who are interested better be up to date on the subjects. If and only if, she meets Mr. Right, Marilyn is wise enough to realize that the chances are slim but the good life can continue if you insist on making it happen. Be positive and inventive. Take a wine course and learn the difference between merlot and a good Cabarnet Sauvignon. Or acooking course. So many men are into cooking these days.

4. An agile, redhead with the air of some years younger, Dr. Marian has friends scatteredaround the globe. And she invites and entertains them. In return she gets invited back echoing Marilyn’s caveat. There are men in and out of her life but can they handle this dynamic dame. But once again, her charm and intelligence and dedicationto her friends is what counts foremost to her.. I’ve never seen her bored and she’s certainly never boring. The only time she feels fragile is when she gets the sniffles or can’t get to her tai chi classes. Take an exercise class and keep in shape. It’s also good for aging bones and a sense of well being. Join a library and go to their lectures,ditto for art galleries and museums who often have good after hours discussions and films.( She, too, has a man of great knowledge and was never keen on a trophy wife. Bravo).

Looking over the rules of the game of being on your own are varied but depending on how you accept the role in the last scene of life, can be pretty awful or pretty good. For many it’s the worst of times. But life is a challenge and it’s worth meeting. How do you learn to live alone, like it and try for the bet of times.

The Invisible Woman, those of ‘une age certain’ can recreate themselves and enjoy the gift of time. After all women in India either accept their fact when their husbands pass away knowing they will never be able to marry again or throw themselves on the pyre of fire with their life partner’s corpse. Not a pretty sight and certainly not for the North American sensibilities.

In some parts of Italy, the black clad woman of any age who become widows don’t dress in that colour for chic but to tell the world that part of their sexually active life is over. As they say, it ain’t over until it’s over.

1. Learn to depend on close friends.

2. Take courses..in anything and perhaps begin a new career as a photographer or artist, or potter..

3. Travel, if you can, even if it means taking an inexpensive trip out of the city for a weekend. It will revive the spirit and the feeling of independence. It also is so mind broadening. However, don’t take a cruise alone. There’s nothing more depressing
then never being invited to sit at other passenger’s tables in the evening and the truth of the matter is, that single women just aren’t welcome.

4. Whatever your vocation was during your younger years, try getting a project job with a time limit.

5. There are always availability for volunteers. Hospitals and charitable foundations will gladly welcome the capable woman.

6. Don’t bring your troubles to any venue. No one really wants to hear about them.

7. Make weekly arrangements to meet up with friends for a movie or play or dinner.

8. Get into a book review class. There are always so many single men who are also interested in learning about the top ten list.