I hired a taxi driver to orient me around Madrid and to show off their magnificent buildings. Of course, the architecture of the 20th and 21st century is there to admire, too. But few cities have the plethora of monumental edifices.

My driver couldn’t help with all the names of many of the grand buildings. But there was one that stood out and he did know the elongated white, classically designed building located across from Museo el Prado with probably the best location in Centro, He proudly told me it was The Palace, which locals still refer to the Hotel Palace Westin, one of Marriott Hotel’s, Autograph Collection.

Built as a hotel in 1912 under the auspices of King Alfonso X111, it was the first to use reinforced concrete and also became the largest hotel in Europe. That was a time when there was a dance hall, a jazz group and a brewery on site. Now, there’s a book lines panelled bar with souvenirs of the past and memorabilia from some of these rooms ad their guests. It was at the beginning and still is, a head- turning building.

I knew that I would have to see this remarkable hotel, so a call to Paloma, who personifies professionalism and friendliness, agreed to meet and show me around. This was certainly not a disappointment or waste of time during my short stay in Madrid. The Palace Westin Hotel’s interior is as exquisite as is the exterior without too many gargoyles, trimmings and do-dads.

There’s a dignity inside where details are consistently and consciously, subtle and majestic. 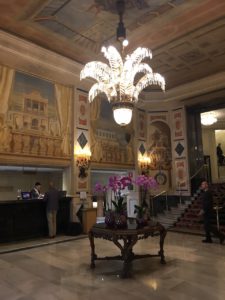 A lobby for me is always like an introduction to a good book or as is the bread basket at a restaurant. And the Palace Westin didn’t let down my somewhat absurd beliefs. At this point I have to tell you, dear readers, that I was not a guest at this well deserved 5 star accommodation.

A wide stair case seen as you walk over the threshold, seems to make everyone descending, look so elegant. But that was only the beginning of my jaw dropping experience.

Paloma, decided we should have tea in the Rotunda. So, into the signature room of this hotel and the city already filled with noted treasures, is a masterpiece of days gone by.

It’s the dome that dominates the conversation. Not just any old rounded glass roof. This is a huge stain glass dripping delicately with floral arrangements. And during the recent renovations of part of The Palace Westin they had rugs made to match the color and flowers design.

During my oohs and aahs, Paloma happily told me, that this is the original dome which wasn’t destroyed during the Spanish Civil War. In fact, a wonderful fact is that this multi-pillared room helped by the huge dome, was used as a surgery. Why there? If the lighting failed, the glass allow enough brightness into this large area – a sensible alternative. Many of the 467 rooms and suites were also used, at that time, for ailing and healing military. 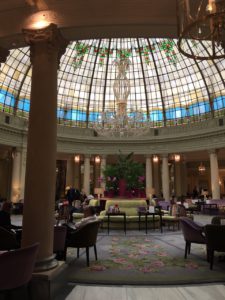 These days, the Rotunda is prepared every morning for what I was told, is a most sensational breakfast which goes on until 11am, making it brunch if you eat late enough. The young man to whom I had chatted, an early riser, told me the displays were so artfully crafted, he felt guilty digging into the many delicious international foods.

Every staff member is so very friendly and helpful. Three concierges have the prestigious Golden Key badges and if that isn’t enough, how about having coffee brought to your room each morning.

Their renowned Westin Heavenly Mattresses and Pillows make slipping into bed part of this turn-on for their guests. All these assets have intrigued many heads of state, royalty, artists, actors opting to stay here. I wondered, if and when I do have the opportunity to return and stay at The Palace Westin Hotel, would I have in the same room and mattress as A.Einstein, E. Hemingway, P. Picasso, Ava Gardner, S.Dali, B.Clinton, Peter O’Toole, Bruce Springsteen or
the late, great Montrealer, poet, singer, Leonard Cohen .

Paloma knowing that I was originally from Montreal, shared her meeting with Mr. Cohen, whom she said was the most polite, generous, soft spoken, modest personality/celebrity. After speaking with her about this Montrealer, whom I also knew, only two weeks later, passed onto the Tower of Love and Paloma emailed a memorable photo taken while he was their guest. 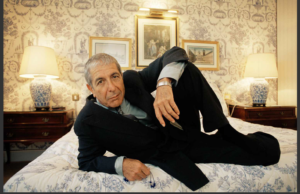 Each spacious room and bano have great ambiance, wi-fi, flat screen and all amenities expected from a hotel of this status.

There’s always a next-time for me to visit Madrid, one of my favourite European cities. I know where I plan to sleep on one or more of those nights.

Alas, gone is the ballroom, so no flamenco practice for me!!!