Gunter Demnig’s homage to the Holocaust. 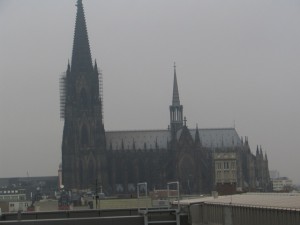 On a cold, dull winter Sunday morning in Cologne Germany, when everything is closed as tight as a clam, the streets devoid of people, it was with luck that a young man who could speak English, read the sign above the unanswered bell I had been ringing for ½ hour. Unanswered because, as the note stated in German, the entrance was a few doors away in a garage. My perseverance had a reason. I had come to this Saxon city and I wasn’t going to allow the elements to stop me from meeting and interviewing sculptor Gunter Demnig. 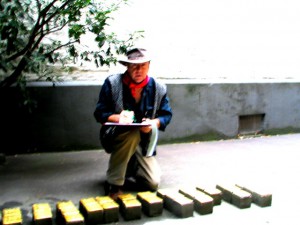 If the name doesn’t mean anything now, it will in time. He’ll be known for his creative endeavors in establishing works of art commemorating Jewish people who were ‘lost’ under German fascism.

“Neighbours who lived happily alongside each other until 1933, suddenly disappeared, their homes and apartments were emptied, furniture taken away and no one knew anything?”  The fact that there were never any questions of where these people had gone and why, still haunts Demnig, a Berlin born, 62 plus year old and a non Jew. 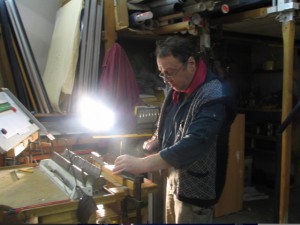 The garage door opened and there to greet me was Gunter Demnig, wearing his signature brown suede wide brimmed hat, earring stud, red scarf around his neck, a much needed vest for warmth. Garages are seldomn heated and I too, kept my coat on during the entire time. The huge space isn’t just Demnig’s atelier but also his living quarter- his home for over 30 years. The layout in America, would be called a loft with the work area on the main floor and several steps up to his open living/office space. It’s here that he sleeps, works and crushes cement. Hence the story.

A self-confessed controversial political artist, he was arrested ( albeit for a short but trying time), during the Vietnam war for creating a scandal by exhibiting a painting of an American flag, in lieu of the stars, he had placed skull and cross bones. 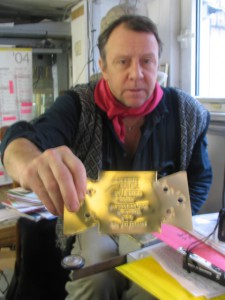 However, Stolpersteine, or Stumbling Blocks, his homage to the Holocaust, has had a much more major impact in Germany and there has been overtures from Warsaw, Vienna, Antwerp, Saloniki, Budapest, Amsterdam, Paris and Milan.

It was in 1996 when Gunter Demnig had an inspiration, something that would be creative and memorialize the fate of 6 million Jews. Victimization of humanity haunts Demnig and thus it was a concept that has given him and the world a new way to remember.

“I wanted to bring back the names of the Jews who lived, loved, had children and a normal life, and lived in these houses,” he says, tears suddenly streaming down his face, still so sensitive to the ‘final solution’..

Stumbling Blocks or Stolpersteine, marks the remembrance in the form of art in a public space. “Stolpersteine,” he explains, “is to stumble in your brain about this message and the stones.” 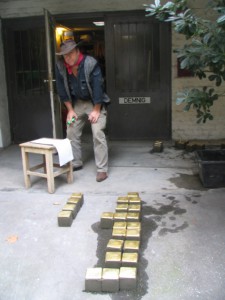 Stolpersteine (Stumbling Blocks) are brass plates on which he hand stamps, ‘Here Lived’ then inscriptions of the names of victims, their birth date and if known, the date of their death. Afterwards, he folds the corners of the brass to fit over the compressed concrete blocks which he prepares himself with a strange looking hand-manipulated machine. The finished block is set in the pavement in front of the houses where these Jewish people once lived. For each installation he receives Euro 95, a meager sum for these touching memorials. Now there are several sources who contribute to this imaginative and important effort. The process is arduous. He works 7 days a week, usually for 14 hours daily.

“It’s my life,” he states, his eyes again getting dewy. “We can’t allow this part of history to pass into oblivion.”

With the assistance of a few people, including his fiancée, Uta Franke (he asks for her name to be mentioned since she has been an invaluable help), the investigation of names and dates has freed up time for him to concentrate on the sculpting of the 10cm by 10 cm by 10cm blocks. Not only is the manual labour exhausting, but then there’s the researching names and addresses and the fate of the overwhelming amount of victims- an awesome endeavor.

I saw my first stones while I was in Hamburg, before meeting Demnig. It caught me by surprise as the sun shone down on the dull ancient cobblestone street with the unexpected glistening of two stones. – a husband and wife who had died in Auschwitz.   After that, I walked by many more, never forgetting to look down.

But it wasn’t an easy start. After offering 600 Stolpersteine to Cologne as a gift, he was told that the city would allow him to continue with the understanding that they would not be liable for any costs. The first installation without the proper permission, created an outcry from the residents of buildings where he had planned to place plaques on the walls. Not too many residents were happy about this. In fact, there was a serious outcry against the installations. Reasons, he says, were mainly because these homes may have been taken by the now-owners who perhaps never paid the rightful owners. So, with the acceptance of the city officials new offer, Demnig’s next and lasting idea was to place these plaques in the street in front of the buildings.

On one wall in his office there is a huge map of Germany with red pins stuck to each city, town and village where the Stumbling Blocks can be found. To name just a few, towns like Siegburg, Munster, Bruhl, Bunde, Lahr, Fritzlar, Lubben, Neuruppin and larger cities –Dusseldorf, Freiburg, Hamburg, Frankfurt, Cologne, Stuttgart, Berlin and many more since I wrote this article.

I first entered the garage, I carefully stepped around 36 Stolpersteine which he was preparing to take and install in Mulheim.

This day, he still suffers much ambivalence about his father who had been a soldier in the Deutsche Wehrmacht, although Gunter adds, “ he was in Spain during the war.”  Whenever young Gunter had asked about the war years from Demnig senior, there was only silence about the horror during that dark period. The first he had ever heard about the Holocaust was from his grandmother who told him of the horrendous dark era in Germany.

And after speaking with Gunter at length, I know that his work isn’t done to garner attention but to state his feelings “to keep the memory of the victims alive throughout Europe.   To date, throughout Germany, 5000 have been installed in pavements. When I was last there, there were over 1450 in Cologne, -1000 in Berlin, well over 960 in Hamburg and the rest in 60 other German cities…and growing daily.

But the installations have brought up yet another argument. “How can you walk on the graves of people,” he was asked and admonished by many. His answer “this way you can never forget and besides, every time someone walks on the brass plates, it only makes them shine more.”

“It’s a small monument,” he says, ”but it will be big when you see thousands of them.”  Gunter Demnig smiles for the first time since we met.

For those interested in getting in touch with Gunter Demnig…email gunter.demnig@stolpersteine.com Tel 49 221 25 14 89