Seven years ago on my first Three Gorges Cruise, I was underwhelmed by the ship, the food, the service and, of course, the river, not yet completed, and the concern about what was to happen to the Yangtze River, the dam not yet completed. Over 1300 villages and nearly 1.3 people,  many farmers who had made their livelihood  for generations as farmers, had to be evacuated. 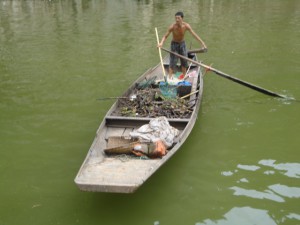 There were still a noticeable few farms seen then.  Now, there’s the occasional sighting of an isolated house and farm set high above the now very much wider river and as we glided along on the M.S. Yangtze 2, it was difficult to forget that many metres below, there were sunken villages.
This ship, Yangtze 2, the newest of the fleet, is a great achievement but then in a country where there are 1.3 billion people who take great pride in their country and their work ethics, all is possible. This newly built, M.S.Yangtze 2, is considered a five star cruising ship, M.S. Yangtze 2 was launched in September 2011.This is most certainly a far cry from the last Chinese cruise I was on, also run by the government. I don’t recall but I doubt that then they had  been certified for safety. It’s obvious that the crew and staff have gone through vigorous training. 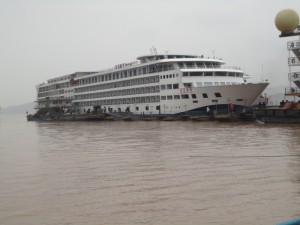 Of course, every major undertaking has controversial aspects and nay sayers.. The dam itself shows a most amazing ability that still stuns the world with the ability to have actually built this most complex waterway with even more complex hydraulics and various mechanisms.  Dr. Sun Yat Sen, in 1919, thought about a dam and although built and will be completed in 2015, the site was changed.  The dynamic transformation of the area is clear of any villages since all have been submerged.  Far too complicated for me to understand, there is a museum which shows the plans, hydraulics various machinery that makes you silently hear that once sleeping beauty, shout,  I warned you . 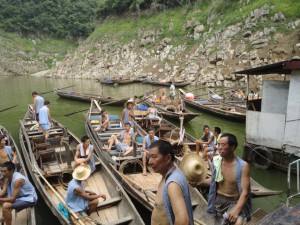 Many farmers and their families have been relocated and often retrained for other jobs. And as far as eco friendly, there is now clean energy versus the old coal fire power once used to provide electricity. Now the major cities of over a billion population is serviced by the new system.

We would spend three nights and four days afloat this five star ship.on a ship  Even the highways, when we had to take a van, are  as smooth as glass, without pot holes which is also an accomplishment since their weather fluctuates from cold in the winter to steamy and humid in the summer and then there are the monsoons to contend with. 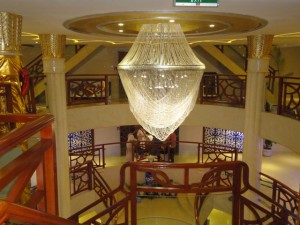 After walking a rickety, steel and wood, long gangplank to the ship where every 6 feet, there was a crew member to remind you to be careful, it was a bit of an unexpected  shock to see an overlarge, opulent, crystal chandelier hanging over a curved double stair case which leads off from a reasonably sized lobby where the velvet winged back chairs were studded with large rhinestones.  Nothing too Chinese about these!

Who could have imagined this extreme change. The service was exemplary as we got off and on for excursions.  Even the constant greetings -in English by the staff  was gentle, while I struggled to say my few phrases in Mandarin.

The spacious enough suites, with dullish color, but lack of decor had an adequate flat  large-sized TV,  with a few English channels and the absolute beauty of the oft changing shapes and heights of the mountainous area seen from the large windows.   What I enjoyed most was  the small balcony complete with a small table and two chairs, perfect for that morning cup of tea of coffee from the room’s counter or a late night observance of the sky’s sparkles. 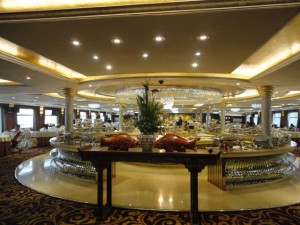 And even a mad shopper couldn’t ask for more  closet space, adequate for anyone who had intended to fill the space with the remarkably priced goods (see Shopping in Beijing) and with enough drawer space for non hanging garments.

Bottles of water,  always supplied for drinking, was suggested instead of tap water.

The housekeeping staff was impeccable. The bathroom, small but adequate- mine with a glassed in shower-  was for one person at a time, especially one  who doesn’t travel lightly but with loads of cosmetics and a carry- on pharmacy of pills and potions. In hind sight, there could have been more shelving units.  However the more expensive suites- and only one was available for site inspection, didn’t spare any cost. If you were in a five star hotel, you’d not know the difference that you were on a ship, since the amenities were grand . Remember the song, A Slow Boat to China.  Well, I found myself humming it constantly.

Each evening, the next day’s program was printed out and put on the turned down bedding. It was a challenge to wake up early but a delight to take tai chi exercise with Dr. Zhao on Deck 6 where there is also a reasonably sized pool and large in-door bar.  Dr. Zhao is a man of few words, if any at all, but  one with many positions. There were no directions other than to “watch and follow my positioning”. End of conversation. The unsmiling Tai chi master seemed stressed by the lack of more advanced attendees and I learned more from a wonderfully friendly Chinese woman who showed me some essentials.  And then off to a massive choice of breakfast edibles before heading to a daily excursion. 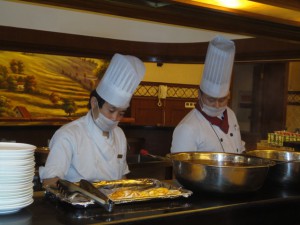 The two restaurants were always  busy.  One is off the lobby located on the 2nd floor and could seat 300 guests. The more exclusive dining room, while much smaller  on the 6th floor (although the elevator only goes to the fifth, the rest of the steps had to be considered part of your daily cardiac/aerobic exercise). Both had choices from Chinese to International menus.

I adored  passing the several of the often unused rooms. My favourite, looking more like an English library, with tufted brown leather sofas,was a bit of a gaff since there weren’t any books and only a handful of Chinese magazines. Making up for the lack of reading material were an unique pair of tall red vases and a stunning large quartz vase as a nod to Chinese decor. The lively colored carpeting of yellow, blue, green,and red was modern. 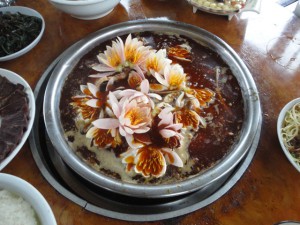 The Cigar Room where I never even sniffed the smoke, a seemingly unused Chess room was made up by the action in the Game room filled with Mahjong players who preferred to stay on board instead of taking the outstanding sightseeing trips which they had probably seen before. I could hear the mahjong tiles rattling which brought back most pleasant memories of that singular unmistaken noise from the year in Hong Kong and also  when passing houses of Toronto’s huge Chinese population..

Much needed was the large venue which, and like a chameleon, became a cinema, conference platform and where I was asked to give a speech about tourism.  I focused on the needs of disabled/ handicapped guests who would want to see The Three Gorges. But the traditional high thresholds, the wobbly and long distant gangplanks, narrow doorways  now make  that  impossible. There are two available disabled rooms on the ship with over 200 rooms.

After dinner, a large bar became the evening entertainment disco/space where one evening a fashion show featured seriously stunning old traditional robes (my Chinese friend said the colors were all wrong) to the present day trends, all modeled by the staff.

On the lowest level of the ship (called level 1), were the amenities like the perfect foot massage for about $15 and a great unexpected wash and blow dry for about $20. With the humidity and heat, suddenly hair became an important issue for women with frizz problems, only to be expected in July when temperatures reach the high 30c (90f) 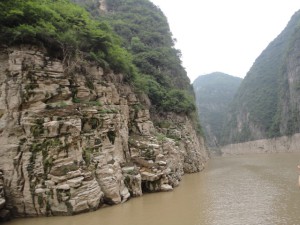 With our various ports of call, we often had to take a small van to the locations.

Not to be missed, high on my list, are, of course the three gorges, Qutang, Xiling  and Wu ,the latter, the most beautiful.  We passed stone caves many metres high above the waters, where once Ba burials took place,Ghost Town, Dazu Stone Grottoes with extraordinary  carvings and the most beautiful  excursion for me were the three natural stone bridges.  However, someone forgot to mention to me that there are 900 steps down (not 10 or 40 at a time but all 900) plus about a 6km (3.6mile) walk to the exit.  During the numbing walk is a traditional small building now an hotel and where a movie, Impressions of Yulong, was filmed. 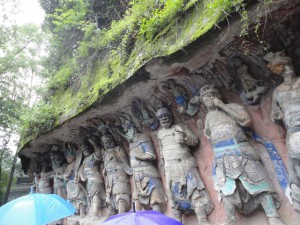 No matter how magnificent the white cliffs, huge sculpted mountains, the silent interrupted by tweeting birds, gushing streams overflowing from the pelting rainstorm, a few small but wonderful waterfalls and marvellous crevices. But the heat  was debilitating and a kind person, carried my heavy bag and held my arm to help with those steep steps.

I was never as happy to see a waiting open sided cart ($2) which took us back to our van.  Of course, during the entire trek, there were the constant offering of being carried, like  old royalty, in a wood chair like old royalty, held usually by two elderly men.  The idea seemed most tempting but the thought of these men having to carry my 120 pounds (okay 125 pounds) in this humidity made me hesitate. 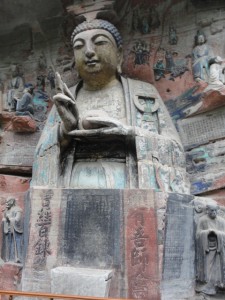 Awaiting us back on board was the Captain’s dinner, another ceremonious adventure.

There are few adventures that could capture a country that now boasts of skyscrapers, subways, hundreds of thousands of cars, cafes from just about every country and being navigated through the once unthinkable Three Gorges.

My new Italian friend whom I met on the shop, Rossana Tasso, a tour operator from Venice, has her own opinion after many trips around the world.  This was her first trip to China.   Although she liked the ship she found it difficult to understand the culture. 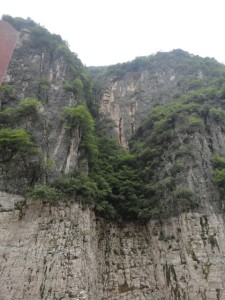 “It is very different from ours,” said the stunning Italian.  “I’m fascinating to know different  places, see, and travel to other countries.  But I must accept without judging because  China is so much more disciplined with a very different kind of organization.  They are very strict.  But look at us Europeans. We are in a bit of a mess.  The first time in the first time in Asia, I was shocked when I first went India,Thailand,Indonesia and other far East countries.  But  China, it is even more different and hard to break into their senses and moods.”    But at the end of our discussion, she agreed that they enjoyed the trip and had a very positive feeling to bring back to her clients.
Yes, China has awakened like Rip Van Winkle, except the world is watching, wondering how so much has happened with such a great population in such a short time.  The Three Gorges trip is the best showplace for the dynamic happenings in China