Wolfsburg Germany doesn’t exactly tumble off your tongue when discussing Germany. Pity! The small city with a population of just over 100,000, founded in 1938 with little culture except for the 12th century Wolfsburg castle from which the original town, Stadt des KdF-Wagens (City of the KdF Car) was renamed after World War II , has become a city that appeals to adults and children with a plethora of activities for all. 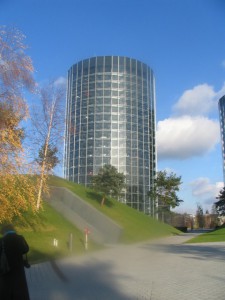 No question that Wolfsburg’s history is marred by the fact it was planned by the Nazis who built this town for Volkswagen factory workers. The cars would later be known as the VW Beetle. Military equipment, jeeps and airplanes manufactured mainly by forced workers and POWs.

The Autostadt entrance building, the Piazza, is a massive; the introduction is Germany’s largest suspended globe. Underneath at first not realizing it, visitors tend to walk on the glass covered floor featuring dozens of small colourful globes. At night when they are lit and it’s a remarkable sight as visitors sit on provided pillows to watch each globe spin below There is always something new in the Piazza. Over 250 interactive exhibits include learning about wind, water, light and vision, life energy and an opportunity to conduct your own experiments. Kids love all the many child-friendly technical sections. On favourite is the Sun Fuel lab where plants store up energy from the provided light and eventually will become raw material for future mobility. Also geared to the kiddies are traffic lessons and driving classes on an outdoor an indoor mini driving track. The magic of it all extends to seniors also. I was able to design, with the available computer software, my own car which is sleek, featuring a glass roof from front to trunk, probably a most impractical and impossible design but it was fun and I could finally choose a colour which is hard to define..a smart dark purple blue.So why the article, I hear you asking? Because, it has become an exceptional unique one-of-a-kind car theme park, Autostadt. You won’t find Mickey looking for Minnie or Donald waddling on the 25 hectares filled with ponds, waterfalls and brilliant architecture. But innovative technology and an up close and personal insight into the making of a car, new age environmental needs and an automobile museum for cars for tomorrow and from times past. But like the 14 million visitors who have visited Autostadt since its opening in 2000, the discovery of various new techniques, innovative research for fuel and environmental needs are on the fast lane. One of the most popular exhibits isn’t a VW, but the first car, the Benz Patent Motor. 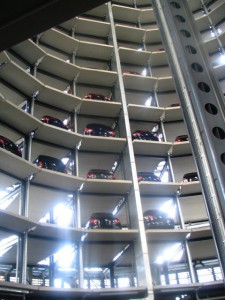 The first time I visited just over 2 years ago, I was overwhelmed by the brilliance of the leading edge architecture of the 7 different pavilions, one for each of the VW brand cars – Audi, Bentley, Lamborghini, SEAT, Skoda, Volkswagen and Volkswagen Commercial Vehicles. Certainly the most impressive, The KundenCentre (Car Collection Centre), are set in man made ponds. These two very large, 20 story glass cylindrical edifices look like huge transparent wedding cakes, each slice containing a car. It’s here the new owners pick up their pre-purchased car. Of course, they could have them delivered directly from the dealership since no cars are sold here; but the Autostadt is a great experience for the entire family.

The smallish square black Lamborghini Pavillion, my favourite, is where the newest model, (this year it’s a yellow Lamborghini Murcielago), is attached to the outside wall and appears in a show of dry ice, then disappears into the wall space until the next appearance about 45 minutes later.Up on strategically placed screens, details tell exactly when their car will be available for the official handover. The transportation of the cars within the glass silos is all done by robots. Watching the anticipation of the faces reminds me of a maternity ward of expectant fathers. However, these days there are a high percentage of women among the eager crowd. Over 600 cars are delivered daily. Until the due time, there are many attractions to see.

In another pavilion, The Zeithaus Museum, on exhibit was Frau Und Auto (Women and the Car), the second part of a trilogy. Even the poster is dedicated to women with its very bold red lipstick-like strokes. A broad much defined red line painted on the floor and stairs leads to each part of the exhibit. One of the most exciting permanent exhibits is however, a stand-out sexy dazzler, the Millionth Volkswagen, a gold coloured Beetle with rhinestone fenders, handles and trimming. To locals it’s known as the Marilyn Monroe Beetle because of her beauty. 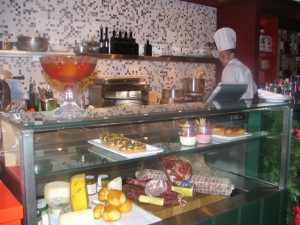 Another attention grabber is the off-site factory tour, about a 10 minute drive, the size of Gibraltar and the zenith of automation. Huge robots assemble cars in various stages as guests are driven passed on the inside roads in a golf cart.Over 50,000 female visitors were asked to fill out forms and choose their favourite of the 12 vintage cars on exhibit. Among them were a 1931 DKW, 1949 Fiat 500, 1968 Porsche 911, 1975 Lamborghini 400 Countach. Beside each of the cars were the piles of votes. The winner was a flashy 1964 Jaguar E Type. My choice, 1956 emerald green, cream top Citroen DS 19 which placed 6th.

For Euros 25, there’s the GelandeParcours (all Terrain Course) where on my last visit, I accepted an offer to challenge my ability with a Touareg. On an off- road track I drove down several stairs, balanced on a bridge, drove through a sand pit and water pond, over a 21 degree angled hill and a log road. I survived. So did the driveThe name EOS is from a Greek mythological character. Mother of dawn and wind. First sighting was wow…so sleek. The appeal of this two door car with the characteristics of a coupe is the 3 sectioned roof which folds automatically into the trunk, the first in the world. When the roof is closed, there’s a sunroof. The choice is either 4 cylinder turbo or VR 6. It’s neither feminine nor masculine in appearance, rides on an all new platform (PQ 45), and a great alternative to a soft top convertible. The lines are clean and the design well thought out. Since there’s no speed limit on the Autobahn, I was able to accelerate and was amazed at the power and the low noise level at high speed. Back in the city centre, where many roads are cobblestones, the smoothness was very noticeable and especially in a mid size car.This time, the offer was equally enticing. I had been asked to test drive the EOS, the newest Volkswagen soon to be hitting the shores of North America in 2007. 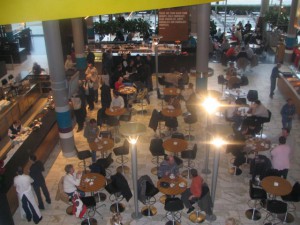 When I decided to return to the Autostadt, I thought two days would be sufficient.

But best of all, there wasn’t a car salesperson in sight.

The Autostadt caters to the physically handicapped
Autostadt GmbH, StadtBrucke
Tel 49 53 61 40
Admission Euro 14 for adults, Euro 6 for children up to 14.

From Berlin, the train is 1 hour and takes you to Autostadt’s nearby station.