It’s rare when I want to revisit an hotel the day after seeing it, but Hotel Kura Hulanda, (“Dutch courtyard” in Papiamentu, the local language in Curacao) is an exception in every way. Firstly, it’s located on the wrong side of the Schottegat Harbour in the capital city, Willemstad. The city is divided by a floating pontoon bridge, Queen Emma, also know as ‘the swinging old lady’. Otrobanda, which literally means, the other side and Punda, the shopping and commercial centre, now vie for attention since there’s a major renaissance going on in Otrobanda. 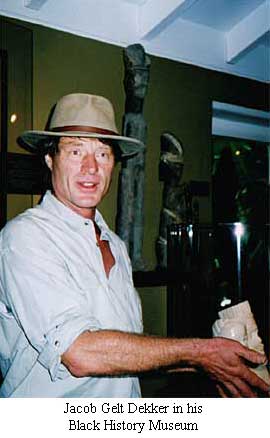 It all started a few years ago when Dutch born Jacob Gelt Dekker, a 56ish rakish enfant terrible, with enough cash and dash, saw the potential. The wealthy entrepreneur purchase eight blocks of the deteriorating area and as though he had a magic wand to wave over the devastated space, totally rejuvenated these city blocks. Out of this came a village-styled hotel complex of renovated history houses, small cafes located on winding lances, sculpture gardens, unexpected uniquely shaped pools and water falls and an archeological museum that is world class.

So far there are only 68 rooms in various building, once houses, which sit on the site. But within a year, Gelt Dekker has plans to expand and increase the size to 120 guest rooms. There’s no limit to what Gelt Dekker will pay if he likes something.

“Money isn’t important for me other than enriching lives and the surroundings,” he stated looking for like a man on safari with khaki shorts, shirt and brimmed hat than a hotelier.

The outside wall of a large building has a huge mural which he designed and commissioned, featuring many known locals peering out of doorways and windows.
He isn’t one to overlook the Black Holocaust and the millions of Africans who were forced into slave labor. Being the son of a Jewish holocaust survivor, he is adamant about wanting the Curacaons to know their history.

Knowing that only the best would do, after walking past the Marble Indian Garden complete with a fountain from Jodhpur, I did a room check of The Indian (Honeymoon) Suite. The cashmere drapes, a silver filigreed bed, silver furniture, silver mated clawed lion and lioness chairs, all bought from an Indian Maharaja, underlined Gelt Dekker’s dedication to purist refinement.

Rooms #118 and #120 are in Colonial Indonesian style, enhanced with all the furnishing amenities one would expect.

Gelt Dekker’s baby is an old bread shop now he turned into his passion – a museum. The gardener was busy cutting and trimming back some of the tropical plants under Gelt Dekker’s direction. However, the former dentist and research fellow at the Department of Histology University of Amsterdam ( No, I didn’t make this up. It’s a strange mixture but so is the man), wanted to show the massive, well documented and chronologically presented gallery of the history of man starting with Lands of Abraham. A tile floor goes back to 5000 BCE, there are weapons from the 3rd millennium, memorabilia from the slave trade in Venice, photos of the man himself in Africa’s most primitive environment.

Thousands of antiquities purchased in salesrooms and from dealers around the world are displayed in several rooms and attached houses. And just across the street is Anne Frank House, another of his conceptions, which has a major collection of photos but less authentic objects since most of them remain in the house/museum in Amsterdam. It’s all part of the hotel complex.

Gelt Dekker’s office is another triumph with original canvases by Hals, Rubens and Van Dyck and animals skin throws which seem to demonstrate his diversity of style and innovation. 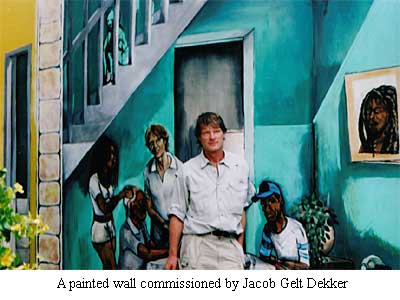 I walked away and asked myself, is there anything that this man can’t do? That’s easy to answer. But then so is the next. Would I like to have an extended time at Kura Hulanda. Yes please and Danki.