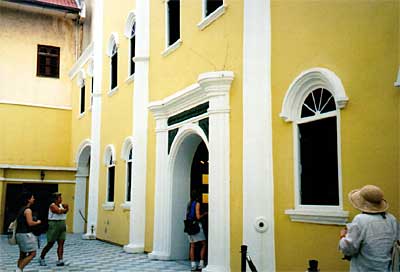 It’s been over two decades since I had been to Curacao and visited the Mikve Israel-Emanuel Synagogue, the oldest synagogue building in continuous use in the western hemisphere and “the Cradle of Judaism in the Americas”. All I could recall from that visit was that it had sand floors.

Recently, when I re-visited this idyllic pastel coloured island in the Caribbean, the largest of the Netherland Antiles, one of my first sightseeing stops was the synagogue (“Snoa” in the local Creole language, Papiamentu) located at Hanchi de Sjopa No. 29, off the main street of Willemstad.

The floor is still covered with white sand. The original sand came from the Sinai desert and was a reminder of the 40 years of their wandering. The sand now comes from one of the local beaches and there’s a “no salt policy, because it would destroy the furniture which is original”. This information is given to me by Rene Maduro, former president of the synagogue and a management development executive. Another reason for the sandy floors is when the Spanish and Portuguese Jews were forced to choose between Christianity or exile, hence many became clandestine Jews. There were secret worship rooms which the sand muffled the sounds during the services.

This tradition continued when a large population of Sephardic Jews moved to the Netherlands and there too, the main synagogue has floors covered with sand to remind us of the remarkable faith and courage of the Spainish-Portugese Jews in the face of that terror.

New to my memory are four significant pillars which hold up the synagogue and are named after Biblical women. Rachel, Leah, Rebecca, Sarah. Also a surprise is the long queue in front of the white trimmed, yellow stucco building – a security measure. Every bag is opened, cameras scrutinized. Once over the threshold, I soon learn about the fascinating history of this tourist attraction which commands a first place along with the island’s Fort Amsterdam.

The first Jew to arrive in Curacao was Samuel Cohen who, in 1634, had travelled on a Dutch ship and worked as an interpreter. In the mid 1600, several more Jewish families immigrated. 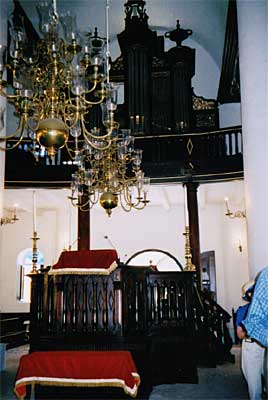 Most of these families had originally come from Spain and Portugal but fled during the Inquisition, finding refuge in Holland. When they did come to Curacao, they were forced to work on plantations. These Jews finally received the right to move to the city where many became merchants. In 1700, the entire white populations was about 4000, of those 2000 were Sephardim. Among themselves, they purchased a large house where they held religious services. The site on which the Mikve Israel-Emanuel is located is the second to be built here and dates back to 1732. It was dedicated Erev Pesach, just before Passover. Then it was an Orthodox congregation but with time, reform traditions, easier to maintain in this island, were introduced. An anomaly in this temple is the organ from 1860 and for 30 years one of the community’s dreams was the organ would be played again. “It may be considered a ‘goyisha’ instrument, “says Maduro, “but even though organs happen to be in churches, it is still a musical instrument, period. So I asked myself, why can’t we have an instrument?”

Originally, it was brought into the synagogue with permission of the upper rabbinate in Holland which is super Orthodox. “My secret dream was for the organ to play again. It stopped playing in the 1950s. We knew it would cost a fortune to have it fixed. But when we had our 350th year anniversary, Crown rince William of Holland, came specifically for our celebration and rededication of the old cemetery as an historical monument. At the end of the service, the chairman of the committee read a letter from the government of Holland and in the letter it told us they were granting, actually gifting us, with money. It was too co-incidental since it was almost exactly what they knew the organ would cost to fix.”. Maduro will never forget that Monday evening with a magnificent service, all the chandelier candles were lit (there is no electricity) and they were granted the money.

The synagogue committee retained special restorers and the organ was sent to Holland to be repaired. Instead of 3 years, as was suggested it would take, within 7 months it was back in Curacao.

Among the other treasures are torahs, none younger than three hundred years old. They were written in Spain, taken to Portugal then brought to Amsterdam and finally found their permanent home in Curacao. One that stands out because of the engraving, has been proven to have been written in Curacao. “We had a visit from Rabbi Earl Ray of Long Island, New York, who was astonished. He couldn’t believe what he saw. However, with all this, there are still few Bar/Bat Mitzvahs, probably one a year and those are members who now live abroad,” Maduro tells me.

Just on the other side of the entrance is a door leading to the museum. It has its own bylaws and “over time when we need something for the synagogue, we borrow from it,” Madura smiles. “It’s a living museum and started several years ago when a movement here on the island flourished to create this museum. And every object is original.” However, a museum requires constant attention and they are not attracting as many visitors as they want. “Visitors come to see the synagogue, look around but don’t cross the short walkway where they would really see the true Jewish Curacaons.”

The small courtyard has reproductions of original, now deteriorating tombstones. Up the curving narrow staircase are the items of everyday use, symbolic ritual memorabilia of which Madura is most proud. “But it demands, time, reading and understanding.”. 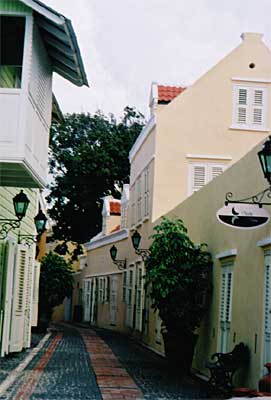 Even though there is no anti-Semitism here or ever in the 350 years, the major problem has been in keeping the population up. Thirty years ago there were 600 families. “Our grandparents had 8-10 children. Now the younger generation has one, maybe two children, then they leave for college, marry and never come back. We are now only 250 families.” He continues, “besides, career professionals don’t have much to look forward to here. How many lawyers or doctors does this small island need?” As for intermarriage, he says, “we are totally integrated but we try to keep our identity and there is no intermarriage.”

When asked about kosher food, he tells of “growing out of the need because it became a hassle”. As for a minyon, I am surprised to learn, there is one every Friday and Saturday, but that too is a hardship. “Many people are too busy, they go on holidays. But it’s become easier since we now allow women to take part.”

In 1964 there was a movement to merge the seating of women and men and to allow them to partake in various ceremonies.

“Last year we became totally egalitarian but there is still no talk about a woman rabbi. There’s still enough sensitivity about that. But we do have a woman president.”

The Mikve Israel-Emanuel Synagogue has been there for 350 years, and with all the new innovations, who knows, even a woman rabbi may become acceptable- hopefully sooner than a few hundred years.