Say France and I’m  already head over heels in love.  From the time I was in my teens, I was smitten with anything French.  Perhaps that was why a newly graduated doctor who had studied in Montpellier, France, the oldest medical school in Europe, was my first love.

At that time, English Montreal was very separate from the French area and a very staid part of the city. And here was  a most flamboyant, attractive young man who was considered ‘bohemian’, (not a nasty word but at that time but one with overtones of being odd). He was the consummate Frenchman (and now a well known general practitioner), but from English Montreal.

He couldn’t adjust not living a French lifestyle. So our outings including going to French cafes that existed on the east side of Montreal, almost totally French, for a glass  of wine. It’s also where I learned about Montpellier, and he would boasts about  the gourmet food, sophistication, the monumental buildings, the popular large city square surrounded by multi outside patios. When it was warm there were never any seats (that hasn’t changed), and when the  winter chill blew in, the indoors became the meeting place.

But I digress.  This is not a love story but a story of my love for river barging.

I hadn’t thought about Montpellier for decades until my husband and I decided to take our second barge trip with European Waterways, (www.gobarging.com), the first was last year on their hotel barge, Renaissance.  At that time we opted for the northern part of France where we went through a numerous variety of the  French locks (les ecluses) system. Most interesting was watching Captain Laurent, deftly navigate this barge, an amazing feat in the narrow locks.

Canal du Midi, was our choice and the barge, Anjodi (www.gobarging.com/anjodi-barge) glided through Languedoc area, one of the most beautify areas in France.  (I can feel some French wine growers tossing their Merlot at me). 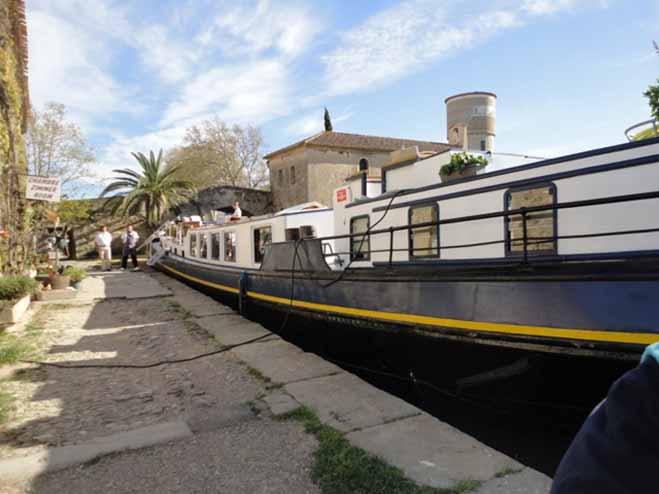 This is in the south and again we traveled with the European Waterways Company. As good fortune would have it, at the helm was the most capable, Le Captain Laurent, who allowed each of us to take a turn at the wheel for about 15 minutes. And since the waters of the canal are usually like a mirror and so calm, danger wasn’t even thought about but he did stand close by, giving me directions.  It was like family reunion with Captain Laurent, Chef Ollie and the major domo, dynamic Emily, another crew member from the last trip.  She was a master of creation making each meal extraordinary with her masterful folding of napkin, just as though they were paper origami.

Anjodi, is a Dutch designed barge which was once a  freighter and because of its size, was perfect for the 330 year old Canal du Midi.  Of course, all has been refurbished and the African hardwood paneling shines as does the constantly cared for brass trimmings.

With only 7 guests, it was easy to think we were on our own yacht with our special five star chef,  Ollie, who was also on The Renaissance.  It was like a family reunion except for the other 5 guests who soon became like family friends with many common interests. 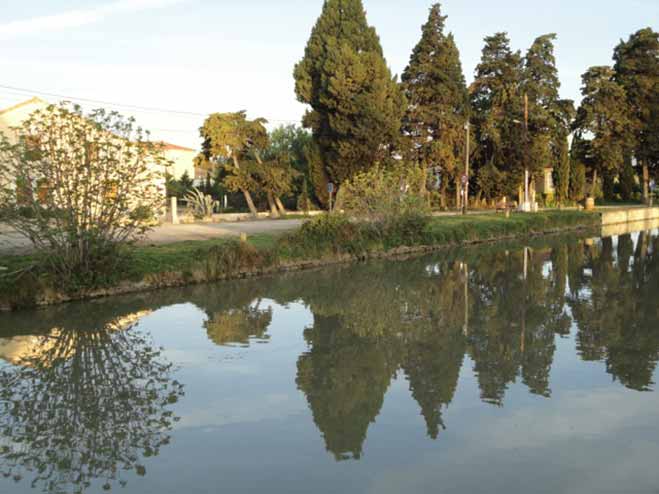 However, to get to our ‘bateau’ from Paris where we had landed at De Gaulle Airport, we took the TGV, the fast train to Montpellier (hence the recollection of my youth).  The 3 1/2 hour trip  added to our travelog as we passed farms, fields of wheat, vast vineyards, and in general, the lovely French countryside.

Our plan included spending a day and night in Montpellier before departing for the barge. Montpellier has proven how well  the old and new architecture mixes so well and the large city square filled with outdoor cafes still seemed to be the meeting place.  On this hot sunny day in April, we were able to find a table for the mandatory espresso then took the touristy trolley to parts of the city we would never had known about or been able to reach on the hilly cobblestone streets.

I recalled the doctor’s description of many areas from those many decades ago but know that so much has changed that even my long lost ‘ami’ would probably not recognize the very smartly turned out locals and the savvy, large city. (I even found one of the best hair salons, Le Lab, with a sensational interior design and great stylists).

When the van with the other 5 guests arrived the next afternoon to take us to Le Somail , a delightful, quant fishing village, we were welcomed with a flute of  champagne before stepping onto Anjodi. 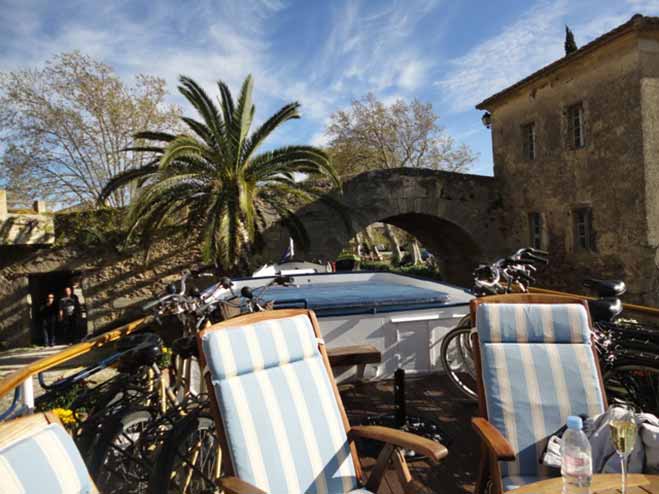 After being shown to our cabin, smaller, than l expected but amazed how much drawer space there was under the high beds and a good sized closet.  Besides, we wouldn’t be spending much time in the cabin.  And although far from spacious, the loo was sufficient with a small shower that always had very hot water.

And who were the other lucky passengers?  A delightful couple were from Adelaide, Australia, another energetic Aussie, she from Perth. The other couple were Texans and we represented Canada.  Quite a mix of cultures and I was curious if we’d all get along for the 6 days. We did- splendidly.

On our way to our first official stop, Carcassonne, we had been told about an unique shop that  created everything from olives and olive wood. Lovely items on all the shelves and less when we left. 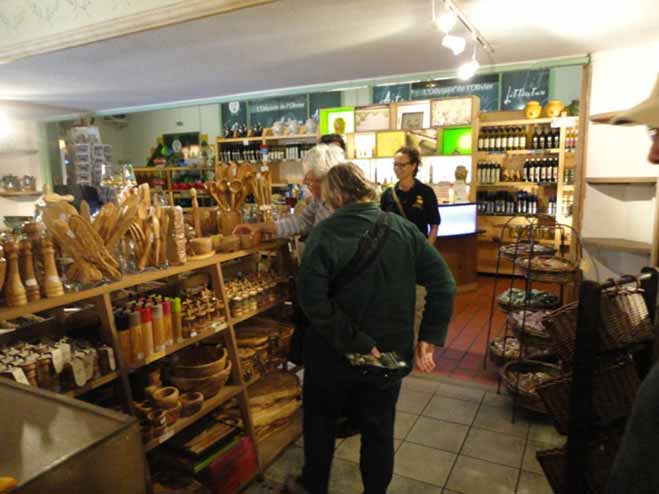 Carcassonne, a medieval fortified city, dates back to Gallo Roman with  52 watchtowers. Outside the walls were trendy boutiques and this being France, many great cafes. 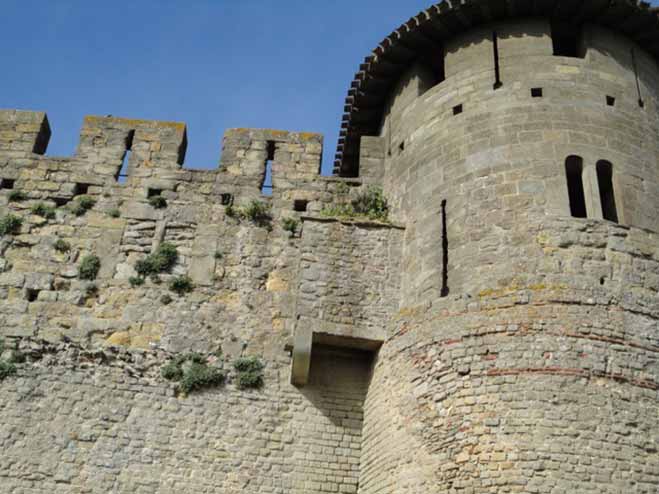 Gliding along this waterway, napping was never a problem…not a bump or wave to shake you awake, only the tweeting of  many birds.

Coincidently, we 7 always seemed up and  around the breakfast buffet at the same time…7.30AM . The days never seemed long enough. 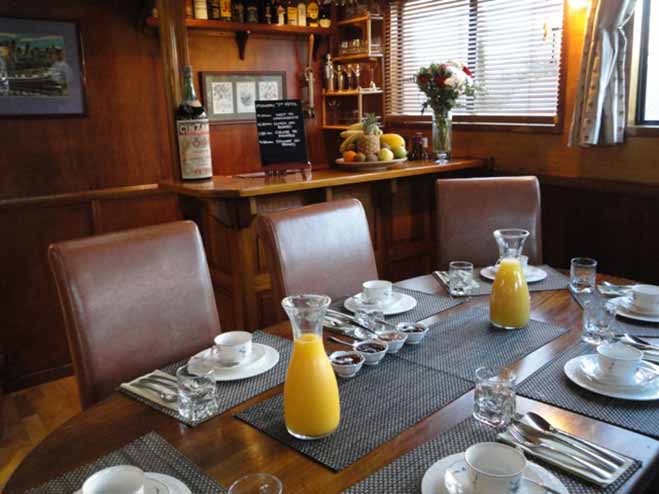 There was one day we cruised along the canal but for those who wanted an exercise challenge, there were bikes available.  None was ever used. Gliding under the canopy of sycamore trees and red bud bushes won out.

Chef Ollie, English born but with several French kitchen experiences, always showed his expertise with his  consistently wonderful offerings. One lunch, for example, was  pan fried fillet of cod with chickpeas, tomato, chorizo and olive cassoulet accompanied by the wine, Chateau Mauvanne Rose.

Much thought had gone into the itinerary.

A truly remarkable visit was the ancient capital of Minervois, Minerve.  The vista to this 12th century Cathars area, (a unique religious sect) had deep limestone gorges and a replica of a catapult.

That evening we cruised to Pigasse. As usual dinner by Chef, was exquisite- roasted breast of guinea fowl, stuffed leg, mushrooms and shallots and no meal ever ended without a platter of marvellous cheeses, -Munster and Salers before the formidable desserts.  The white wine was Rully, and red, St. Nicolas de Bourgueil.

If I had to choose a favourite stop, it would be Narbonne, a Roman Mediterranean capital.  We did the obligatory tour of the Archbishop’s Palace, the Cathedral with spectacular stain glass windows and like most cities with history, a small museum worth seeing. 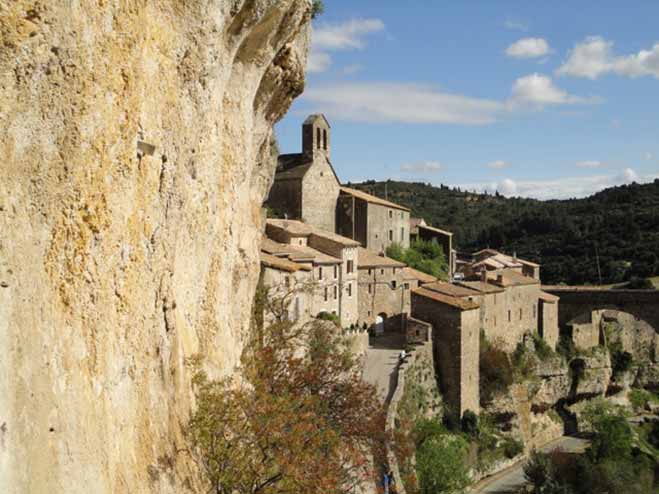 Over a small bridge and a short walk, I was overwhelmed by  the glass roofed, indoor market with food displayed like various paintings. And then also, the great smells of cooking from the cafes-yes,  great coffee shops here too. In this marketplace it wasn’t only about shopping but meeting friends. Buy your quantity and choice of oysters, get a seat at one of the several indoor bars, choose your wine or beer and, voila, especially on Sunday, I’m was told by one of the vendors, this was a fabulous, fun, fine, noisy meal.

Back on the other side of the river, there were very fashionable boutiques. It seemed like a small ‘rue’ in trendy Paris.

After a morning of great ups and downs of the 7 locks of Fonsrannes, we moored at Beziers. There we visited the 14th century, Chateau de Perdiguier for a most informative wine tour and tasting. It’s famed for their Cabernet Sauvignon and Chardonnay wines.

One perfect night, instead of dinner on the barge, we were taken to a two star Michelin Guide rated restaurant,  l’Ambassade in a suburb of Beziers.  My choice for starter was a Reglette de foie gras with gratins and truffles. Next veau (veal) de l’Aveyron and seasonal veggies. Then came the surprise. A tea wagon heaped with at least 60 varieties of cheese was wheeled over for us to choose a few tastings. That was the hardest part of the trip, the decision making.  An exotic fruit tart and pineapple sorbet was my finale, the other choice was all chocolate, one huge ball with a straw for the liquid chocolate inside. But who needs that when the wines were  Domaine La Gravette, Languedoc , Mansamme, Roussamme, Domaine la Maunerie, Saint Chimiam.

Even the French playwright, Moliere, got into the act when we visited Pezanas, and it is said to be where Moliere wrote many plays.

And all these historic sites, luxury  service, fine eating and drinking, sadly had to come to an end which was with the Captain’s dinner.  Chef Ollie, really wanted to give us a truly memorable send off.  Seared scallop salad with crab, fillet of beef with onion puree, oxtail beignet, roasted veggies and, of course, the cheeses, Roquefort, St. Maure du Tourrain, Epossies. And  our final farewell wine was the white Domaine de Bachellery and the red wine was, Les Fiefs D’Aupenac. 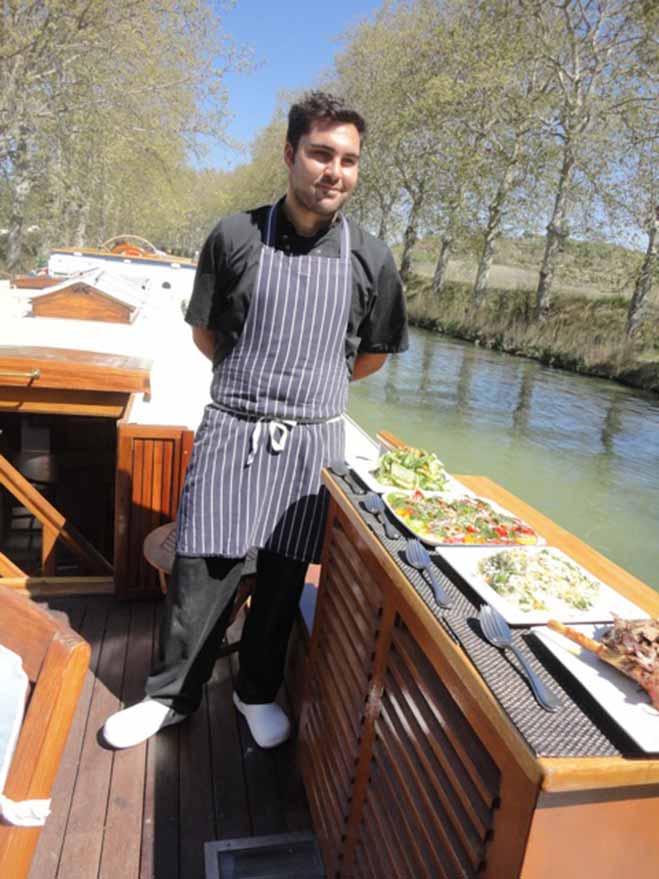 So again it was aurevoir to European Waterways and the Anjodi, the wonder barge on the Canal du Midi, with a slice of my youth,a fabulous itinerary, great food. I’ll drink to trying out yet another barge.  A great way to travel. A sante!