Captain Alan’s eyes were wide and almost teary when he told the 12 guests on the barge, Panache, the news. Our itinerary from Strasbourg France had been changed. 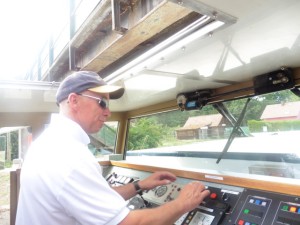 After two years of repairs on the Arzviller boat elevator built over 100 years ago, to everyone’s surprise, the work had finally been finished and the Panache would be the first barge to descend the 44.45 metre lift.

TV and cameras were there to show this great achievement on air and a great news item. The many people who came to see this incredible invention, waved, we waved back, Built in 1838-1853 this elevator avoid 17 locks and 6 days. 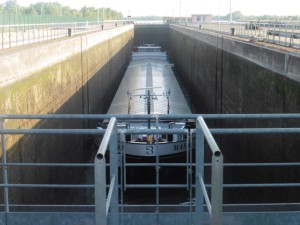 But before that, we glided through a short tunnel where we could see the light at the end. Then there was the unmistakable great experience of a mile long dark tunnel and had breakfast by candlelight. about 7.30-ish. And then the thrill of seeing this amazing accomplishment of engineering as our 36 metre barge slide down to the waters that were to take us to our first stop.

Panache is one of the largest of European Waterway’s luxurious hotel barges and this being my third trip, there’s no need to mention that I have enjoyed all. The first barge trip not knowing what to expect, was Renaissance, with occupancy of only 3 cabins for 6 guests which took us through an amazing numbers of locks (les ecluses) on a Loire River canal. The 2nd adventure was equally thrilling as the 7 guests (4 cabins that could accommodate 8) glided along the silky Canal du Midi on the Anjodi, hotel barge,passing vineyards, small villages, larger historic cities like Carcassonne and Narbonne, Now here we were on Panache, in the Alsace Lorraine area of France on the mirror- like Canal de la Marne au Rhin.(Rhine) 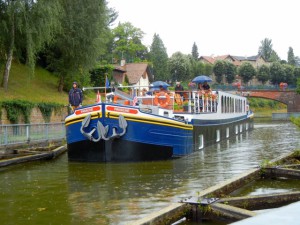 Who knew that there would be so many surprisingly interesting sites?

The first was arriving in Strasbourg a day before departure and discovering a most exquisite city that has not been on any of my lists but now is at the top. A must is to checkout their exciting La Musee d’Art Moderne in a garden atmosphere with the most avant garde collection and then the impressive12th century pink sandstone Gothic Cathedral, home to an astronomical Renaissance clock. 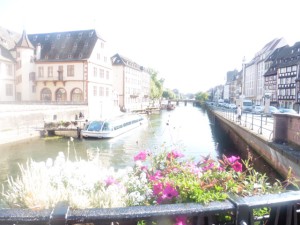 Charm oozed out of the old city’s numerous cafes, one after another, many on the river Ill, as we all watched bridges that open sideways and a nearby drawbridge. We spent the day exploring the area known as La Petite France ( also the name of our tres charmant hotel) with the half timbered houses, cascading from almost every window and door, bouquets of colourful floral arrangement , and eating our share of the variety of sausages. 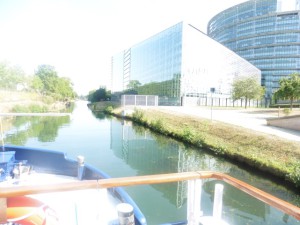 Equally impressive is that this small country now has the great honor, of having, The Institution of the EU (European Union), which we saw one day as we slowly glided by this impressive building.

With a collection of 17 European Waterway barge/hotel vessels, these have been renovated into small boutique-like hotels that just happen to float. The large, stylish rooms on Panache, have loos with double sinks and enough shelving space to keep any cosmetic addict happy. and fashionistas have enough closet space. So, ladies, take all the youthful creams and jars you want to stay with your beauty regime but don’t tote your gowns. T shirts, blouses, pants are de riguier 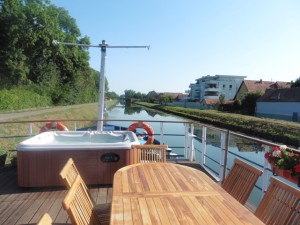 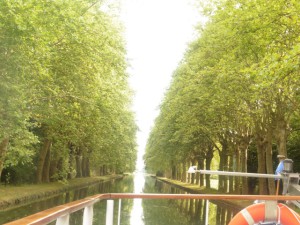 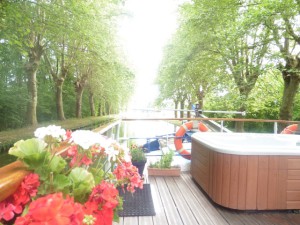 ”What happens if we don’t like the 8 other guests,” asked our friends, Lily and Dr. Waldeck ,who had decided to join us. They had already been on river and big ship cruises. “Like minded people would opt for a barge and not a river or ship cruise.The focus is as different as the dress code and activities”  I explained.

Admittedly, there is always the change that there may be a few with little in common but several elements stood out. They were all well traveled and intelligent, fun, likeable and had a penchant for great tales. 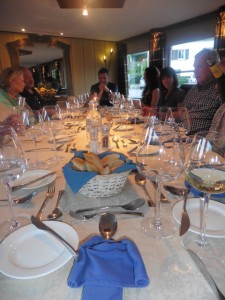 Each evening, the youngest of the group, 45 year old Kelly, from Ohio and her husband Kevin, who had invited his parents as their guests, suggested we’d have a pre-decided oval table discussion on one subject. Although they were not intellectually challenging, the conversations following were delightful and thought provoking. “Who would you like to be your dinner companion”, was an example that brought much discussion. for a somewhat inane subject.(mine was Charlie Rose). If anything bonded this dozen like crazy clue, it was these unpolitical but some serious conversations that followed.

However, we never over-looked Chef Jim’s creative preparations. Salads with surprise pieces of duck tucked into circular lettuce, tender beef with a fine wine sauce, and because it was so very hot, instead of large lunches, out came his talent as a great light -lunch creator of salads and fish leaving the heavier meals for dinner. 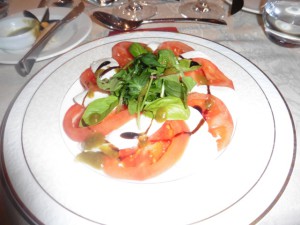 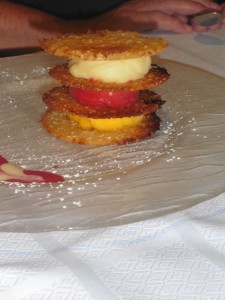 Since Doug and Kathie (coincidently not knowing Kelly and Kevin, lived just miles away in Ohio) were ardent bikers and the reason they chose Panache was the ease of cycling (bikes provided by the barge). It wasn’t unusual not to see them at breakfast. They often met us at the next stop. Barges travel slowly enough so it was easy for these two tried and true cyclists to wait for us.

Our quartet wanted to see the sights at each stop and they were splendid choices. Along the Dettwiller canal and seeing the rolling Vosges hills this was a visual treat in Alsace where we had a private tasting of Gewürztraminer , Pinot Noir and Riesling at domaine Pfitzer. And if beer was your preferred drink, in Saverne we were given a tour of the 1640 Meteor Brewery, the last privately owned brewery in Alsace. 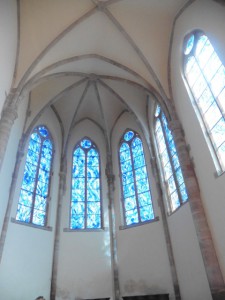 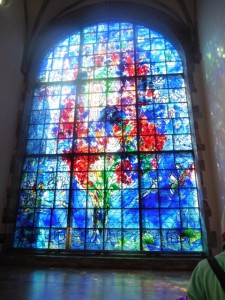 Traveling is all about experiences and here we were in a modern building replacing a demolished church viewing the largest contemporary stained glass marvel by Russian Jewish born, long time Paris inhabitant, famed artist, Marc Chagall. Even those ‘not into art’ could not but be breathless seeing this mammoth 16,000 piece window that took over two years to assemble.The subject “the tree of life”  memorialized the old monastery which this building replaced.

After ambling through the groomed grounds, we headed back for our lunch expecting the buffet usually served on the deck. But because of the torrid heat, 30c (approx. 89f).cleverly, we were assembled in the air/con dining area. 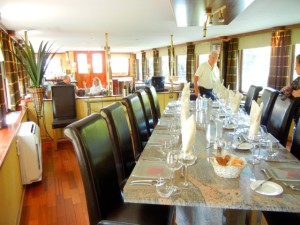 Table for our final dinner on Panache.

Skate fish with hollandaise, was the menu for this meal and at each meal we had white and red wine plus a variety of cheeses from the area. Sated, we were happy to enjoy the canopy of sycamore trees and quickly learned to wave back to the passing boats and pedestrians. 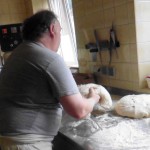 Another memorable morning, but very early, some of us visited Ruby’s Boulangerie (bakery) and pastry bakers) saw how silky the dough could become for a variety of breads. Sadly for the Lutzelbourg locals, this is the last of the 6 generation for this bakery (kids don’t want to knead dough anymore). 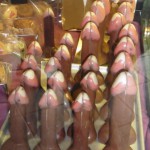 In one of the vitrines of pastries, in any other venue the sight of a upright chocolate male genital would have shocked. However, we all laughed since only the French could get away with this instead of “bringing a rose to their loved ones”, Roman Ruby told me.

We helped Shantala take the bags of baguettes and rolls for the upcoming meals that day. Even at 7AM the cafe was filled with loyal, locals on their way to work.

I’ve always been a fan of Rene Lalique’s earliest works..jewelry and his glasswork in the Art Nouveau and Art Deco style. Behind the outstanding modern stainless steel door were Lalique’s over 500 creations including priceless jewelry, and perfume bottle collections he created. 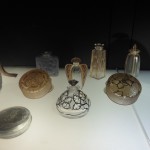 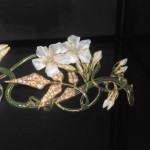 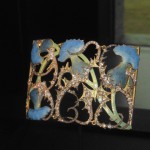 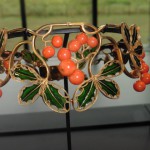 We all seemed pleased that we were seeing a part of France that we would ordinarily never have seen. The memories of mountain top villages, a medieval castle, rolling hills, World War !! battlegrounds, are still so vivid not needing my photos to remind me of this trip. 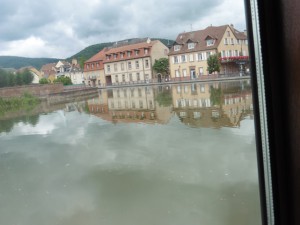 As I looked out my window of our suite, Dumas, there were white swans some brave enough to peck at our window. The pastures of white cows, a dinner at a local restaurant, the many coloured flowers cascading from every window of the smart, small and spotless villages. 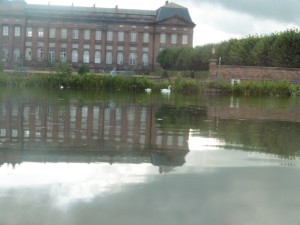 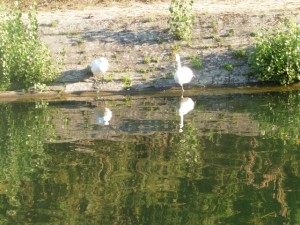 Then the 6 days ended as we bid each other au revoir.

All I could think of is my next barge trip and hope they don’t run out barges of the many more I want try.

Prices for a 6 night cruise aboard hotel  Panache are from US$5,250pp in a twin/double cabin, including all meals, wines, an open bar, excursions and local transfers. Charters are also available.