Glamping.. glamorous and camping at The Lodge at Glendorn. And it’s an easy, 4 hour drive from Toronto and 2 hours from Niagara Falls. 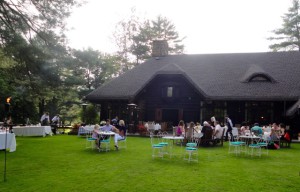 The automatic wrought iron fence opened after we announced we had arrived . Suddenly to our right, crossing a narrow road, was a shiny furry, big black bear.  Who would have believed that happening even before checking in at The Big House at The Lodge of Glendorn.?

The lodge was bought as a retreat for the Dorn family in 1927. By1995 it opened as what we would call today, a rustic boutique lodge, great for relaxation, sporting, hiking, biking, tennis, fishing, shooting and incredible meals.This exclusive 1,800 acred hideaway is located near Bradford Pennsylvania.

And the bear might have been our first but not our last exciting sighting. 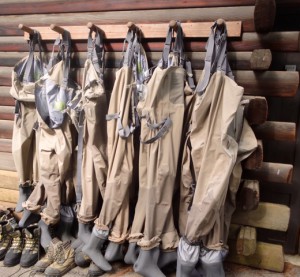 told by the excited general manager, Stephanie Schafer, “to see a bear since few of our guests ever have this sighting”.

The five of us-. my husband Ed, son Jonathan,  daughter- in- law Dana, 13 year old grand daughter Rachel and I had never been to a hunting lodge so we didn’t know what to expect.

And this was a special event . It was our first generational  family get together .. something we had wanted to do for ages.  And since we all have like diverse activities, Glendorn seemed to fill  all the spaces, like an easy crossword puzzle. And what a destination as a  memory builder.

The sun peeked through the leaves of at the variety of trees,( maple,  hemlock, oak, black  cherry, pine), and sparkled on the the fish-filled creek in front of The Roost, our large  private lodge. 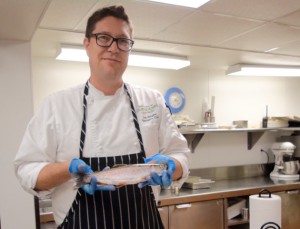 king, the white apron-clad kitchen staff, were  setting tables for dinner. Tonight would be a grill, al fresco, on the finely cut, sprawling grounds and next to The Big House. During our cocktail hour, the trickling of all the streams along with the serenity of wilderness and the tweets of many variety of birds, felt as though we were aliens on another planet.. 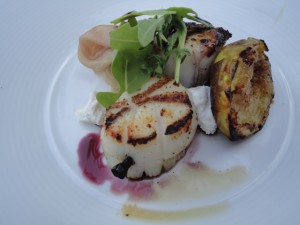 Here in a most bucolic setting were,white linen table cloths, silver flatware, china and centrepieces of red bouquets from the garden. The charcoal was being stoked by inventive, creative,  Executive, Chef, Joe Schafer. Having worked in fine restaurants around the world, loving this atmosphere of the mix of  high luxury and rustic wonders, Chef Joe tells me that after Paris  and London plus other grand city kitchens, this is where he and Stephanie want to live and bring up their children.

Asked what I would say the themes of the meal was, “definitely hunting lodge ”.  The amuse bouche was the introduction, -a small slice of if perfectly garnished and presented antelope. Never having 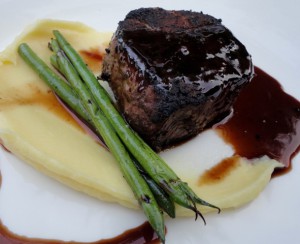 had antelope before, I can describe it as a mix of venison and steak.  Next,  grilled  Georgia scallops with vanilla, prosciutto, arugula and goat cheese, followed by Colorado Droper lamb loin with braised lamb and gnocchi, and just when you thought you can’t have another bite,the main dish was  the most perfectly done, tender filet of beef from Oregon, exactly to our requests, atop roasted garlic mashed potatoes.
I had said no to dessert, until I saw that it was grilled peaches with Glendorn honey, vanilla, peach bourbon sauce. and a round of delicate pancetta  Enough said?  I couldn’t wait for the next dinner which included  Rabbit, Venison, Waygu beef or quail for starters.  The main was Beef Ribeye, Bison Tenderloin or Sockeye Salmon ending on a sweet note of Coconut Creme Brule or Chocolate Torte or both.

As we walked (or waddled), very, very slowly back to our cottage, the thought of the old fisher’s phrase came to minsd. as I looked up, the sky streaked with pink..,I paraphrase a sailors phrase… “pink skie , fishers delight”, Yes, another sunny warm day to look forward to. 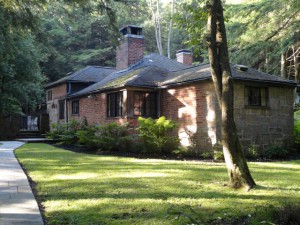 lodge’s centre building) there are four guests rooms, panelled  walls, a huge, cool pool table and the bar.  As expected there were leather sofas and co
mfy arm chairs upholstered in large geese patterned canvas, a tall stone, gas-assisted fireplace (also found in the guest lodges), a luxurious chess set where Dana and Rachel, played, the latter always winning.  I visualied perfection on a rainy day, with drink in hand, and a cheese wagon, this would be the place to settle into.  However, the gods looked down and gave us a sunny, hot weekend. Just steps away  from this truly hunting-decorated room, is the marvellous completely California redwood panelled dinning room with an added glassed -in eating area.

Of the 14 lodges, we stayed at The Roost, built in the 1939, for a family member when it was still a family residence. The Roost with five bedrooms could easily accommodate another 5 people. Spacious, there was never a issue of  bumping into one another and enough seating to curl up and watch TV or discuss the day’s adventures.

All amenities you could ask for, were by Aveda, (plus toothbrush and tooth paste).  All one really needs is a small bag since the lodge’s shop has  great choices for both men and woman and all equipment needed is there to borrow. 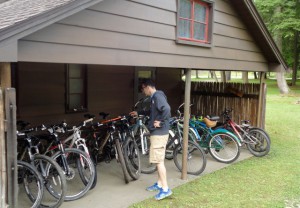 The weekend itinerary included favourite activities individually made to suit each of us. Jon was on a mountain bike outfitted with a helmut, within an hour of our arrival, looking forward to a  scenic challenge, Rachel had already booked her target practice, Glendorn is a fully equipped and licensed Beretta firearms dealer, with shotgun skeet  and trap shooting that mimics bird and rabbit hunting and a rifle target shooting.  All is under the careful guidances of Shane Appleby, who had retired from the military with stints in Bosnia and the Persian Gulf, and Damon Newpher, an all around sportsman. I feared no more. 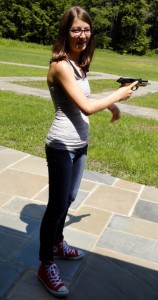 are difficult especially on the unpaved, very bumpy, Loop, which we saw on a tractor -pulled hay ride driven by Damon,  and gave us a perspective of the size, the various animals on this property and a history lesson of each.  Shortly afterwards, Rachel was at the shooting range and although she had never held a gun (what Canadian teenager has guns?), she was a natural at skeet shooting, learned about rifles, was a whizz at target  shooting  and hitting more times than not.

Early next morning, my soft 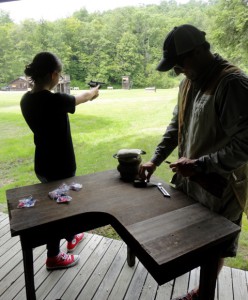 adventure was a facial by the young talented Jennifer Herzog, who had  trained in New York and taken courses in major cities. The Forest Spa was ‘delicately” decorated in pastel colours, After years of facials, I know a great one the moment hands are placed on my face. Her choice for my massage sounded good enough to eat, Caviar & Pearls, a product from France. Dana said that I looked years younger when we met for our next activity and asked if I had had botox shots or a facial. A great compliment for Jennifer’s talent.

At The Roost, which perched on the edge of a stream, we witnesses another guest  who caught and released his silvery rainbow trout on ‘our’ bridge.  Jeff, from Cleveland, Ohio, said he liked to catch then deftly removed the hook  before setting the fish back into the water.“isn’t this the most marvellous resort, It’s our first time but not our last, that’s for sure, Jeff enthused.

Just before our first fly fishing lesson, the hotel had sent two baskets filled with lunch where we delighted in dining at the lake. 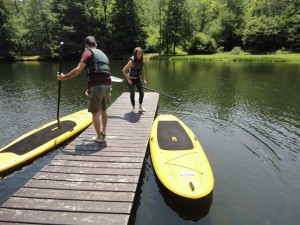 Although I had brought rubber boots, which I didn’t need for two reasons, We fished at the shore of  Lake Bondieu and all the equipment was lent to us. I had always wanted to take fly fishing lessons, so with Shane, showing how, it wasn’t as easy as he made it look. It was agreed if any fish were caught, Chef Joe would prepare it and also give Dana and me a cooking class . Dana, Jon and Rachel also took fly fishing lessons.  I boldly have to tell you kind readers,t
hat, I was the only one to catch a fish…a very large (welll ample) rainbow trout.,

At the start. I truly thought that we may have to borrow a fish. but then beginner’s luck kicked in. Chef Joe received Dana and me and the fish at his newly renovated kitchen. We watched as he cleaned and skinned the trout with his sharpest knife before setting it in a brine he had prepared. Carefully he placed already, pre
pared dime sized, potatoes to replicate scales. The kitchen counter had been set for two  and with a bottle of Pouilly Fouisse  we gleefully ate the lightly fried catch of the day, 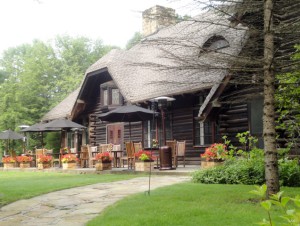 As the sun set with hints of last minute thoughts of sun,   the small ponds and streams, continued to glisten.  Since it’s a Relais & Chateaux hotel, we expected and received for the next few days, meals that were startlingly fabulous. You don’t get accredited by R&C unless you have all the vital ingredients …perfect accommodations, things to do, friendly and helpful staff and sensational food and wine.
On this va 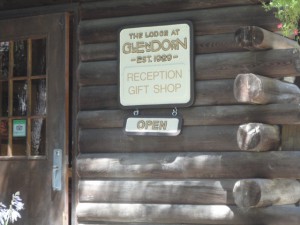 st property, seldom did we meet any other guests from this totally occupied lodge.  “We get clients from around the world,” Stephanie said.  “Germany, Netherlands, France, UK and even Africa.  And most are repeat visitors who book well ahead of their return. “We only have a maximum of 50 maximum guests so it’s rare to meet except at meals.”

Strange that this hunting lodge isn’t more well known in North America although there were many American guests.  An example was a couple from Buffalo, just two hours  drive away, who had only read about the hiking paths early that morning and since hiking is their favourite activity, these retirees,were overwhelmed that Glendon existed in “their backyard and the hiking paths were the best”.

Obviously,  once known, never forgotten.  It’s a place for families of every size and age.

We had waited so long for this generational gathering and I knew this wouldn’t be our last  to Glendorn. It’s the great change to get to know animals, plants, learn new activities and also to finally have time to talk to our small but always busy family.