It isn’t unusual for most travellers to know the country name Corsica, The location  often stumps even the savviest traveller. Is it part of Italy, maybe an island off  Greece?.  This well kept secret island in the Mediterranean should be the hottest and is the ‘coolest’ place to visit. Although it’s part of France, but closer to the coast of Italy with a population of only 261,500, ( many villages have as few as 90 residents while larger cities go up to 25,000) Corsica’s unexpected  natural beauty is like an ordinary teenager who turns into a beauty queen.. 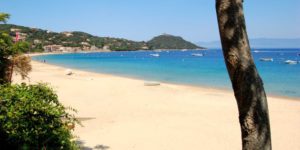 White sandy beaches spread for miles, snow capped mountain ranges can still be seen in May. Below is lush vegetation, a barrage of colourful flowers, maqui shrubs’ perfuming the air and unique towering red rock formation  which looks as though a sculptor has had a hand in the design.  And that is only part of what is considered the prettiest of all Mediterranean islands.

Million dollar yachts from various countries settle in the marinas of Bonifacio, Porte Vecchio and Ajaccio, seemingly a play ground for the rich and famous. However, it’s not usually on the destination wish list for most travellers. This unspoiled island, proudly paparazzi-free so industrialists  and movie stars needn’t worry about being captured without their make-up or stylist.

With little public transportation the obvious way to navigate the country is by car. Even though the signage is bad, often non-existent, getting lost is difficult. There is only one main highway around the 183km by 83km island complete with harrowing hair pin curves through the mountains and narrow lane roads. Local drivers  have a soupcon of French and a touch of Italian madness in their kamikaze driving genetic makeup. It’s pass or be passed.

Looking at a map, what seems and is a short distance may take twice as long as expected due to the tricky roads.  But with the scenery so unique and exquisite, the people so  friendly and eager to talk about their country, stopping for some relief  with  local beer or coffee, is just the needed diversion. However, with only 24 hours to spare before catching my early morning Air France flight from Ajaccio to Paris then on to Toronto, I had to make a difficult decision on how to spend these hours.

When I checked into one of the smart hotels on the marina, the 11 room boutique hotel, Centre Nautique, an old naval office renovated into two storey loft rooms with an obvious nautical theme, it was essential to have made my plans for the next day. Following up on a suggestion for the evening activity was a not-to-be-missed dinner at Stella d’Oro, a thirty year old family run restaurant with numerous dining awards under their belt . Chapon, a tender white fish  seemed to fly out of the water below into the my plate. It was accompanied by a very good wine of the region, Fumiocolli.  Unfortunately, they don’t produce enough for export. 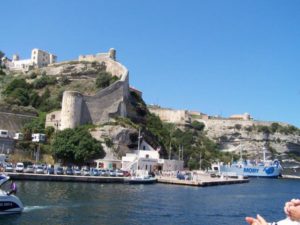 9AM AFTER BREAKFAST AT THE HOTEL

On the marina near the hotel entrance is Rocca Cruises, an hour long essential orientation cruise which not only shows off the unique rocks and cliffs but is also a history lesson.
Bonifacio port is fiord- like with natural narrows about 1856 metres long.  Fortifications date back to the 11th and 12th century built by the Genovese.  Chalk cliffs surround the bluest waters.  The perfect lighthouse Madonetta, stands imperiously high on a cliff. And we head into a sea cave.  Fazio Bay is remarkable for the deep blue waters and the guide points out the cliffs where some of the scenes from the film, Guns of Navarone were shot. There was a slight haze but the silhouette of Sardinia only 10 km away, was visible. 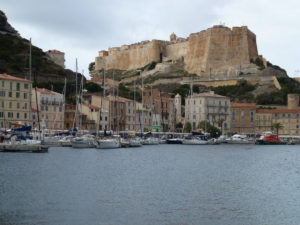 To climb to the Citadel from the marina means good shoes and better leg muscles.  It’s well worth it even if you do have to stop now and then to catch your breath.  Through an arcade is an unexpected city-the old city.

It’s hard to imagine why the tour of the Bastion, The Memorial and the Vestiges Garden, don’t have more prominence.  This intriguing fortifications dates from the 13th century built by the Genoese.  A staircase leads down to the underground halls where there are vaulted rotundas.  From the pre-Neolithic era is a skeleton of the Lady of Bonifacio, more than 800 years old.

From here a few steps lead to the esplanade of the Standard Tower where you can see the harbour. Before leaving the ramparts, there’s Place d’Armes which is the only entrance to the citadel.  Gallerie Mediterannee features Corsican artists and is located near the tourist office..

Walking around the old city there are many fashionable shops and food stores famous for the olive oil, charcuterie and goat and sheep cheese.

For golfers there is a course designed by Robert Trench Jones.

Finding it difficult to leave this water surrounded region, I know I have at least a 2 ½ hour drive to Ajaccio, depending on traffic and my map reading. 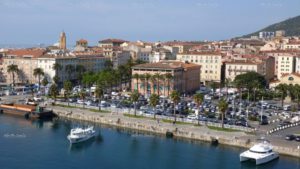 To my surprise, I arrived at Ajaccio, the capital and a very sophisticated city, in only 2 hours and a bigger surprise was finding parking in this very crowded city, again surrounded by water.  Friends were waiting and soon we were sitting in the very minimalist designed Lioli Restaurant. Lingering over salade chevre, filet of Lotte and dry rose Alziopratto wine, made this a unforgettable afternoon. 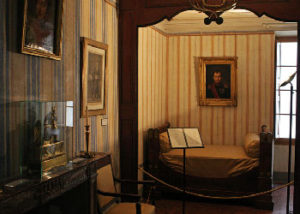 First stop was La Maison Bonaparte, the actual house when Napoleon lived with his family.  Records show many renovations to enlarge took place. The  house eventually was a gift by Napoleon to his cousin Andre Ramolino in 1843 but was reclaimed by ex- king Joseph Bonapaorte.

Rare items-a commode inset with coloured stones, portraits of his mother, the bedroom where Napoleon stayed when he returned from Egypt, are still intact.  Bonaparte worshippers come to this ‘monument’.

Not far is Musee Fesch, a fine neo- classic building.  During my short stay, a collection about Napoleon was being exhibited.   As a great art lover, Napoleon had about 16,000 paintings, at the time the largest private collection in Europe, some of which were bequeathed to Ajaccio.  Included in this museum is a collection of Italian primitive paintings. 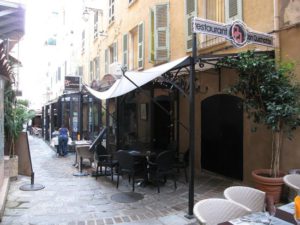 To be close to the airport for my early morning departure, I had arranged accommodations at Campo Dell’Oro Hotel which would be an easy10 minutes drive in the morning.

After freshening up and a clothing change, it was off for an evening in Ajaccio.  The topic of conversation at the chic launch of  Porto Latin beer held at Le don Quichotte, was an in-depth discussion about American designer Tommy Hilfiger whose yacht was moored at the marina.

The terrifically chic crowd could have made a great ad for his or the beer company.

Although it was a 15 minute drive along the sea coast to L’Ariadne Plage, a restaurant which specializes in local fish ( langouste, loup, bonite), the candle light, sandy beach, romantic couples, live music, friendly owner, were the ingredients for a fine finale.

There was no need to ponder whether I’d have sweet dreams. It had been a wonderful full day heading the list of fabulous memories.