The Romans who left a legacy of treasures, once conquered Tunisia. These days the invaders are tourists who come to see the well preserved antiquities, to soak in the sun on sandy stretches of beach, visit the souks, Berber villages, the Sahara and the Salty Lakes.

On a ten-day trip, the goal being the island of Djerba ,with an adequate guide and a terrific driver, I see huge hunks of this diversified, colorful and history filled country. 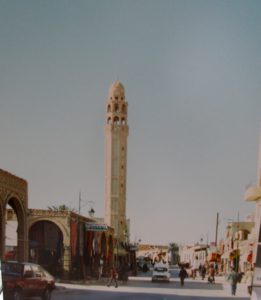 It was just luck that we arrived at the weekly market day (every Thursday) in Douz, a picturesque desert village surrounded by sand dunes. Instead of mixing with local patrons who come much earlier, I’m being elbowed by tourists. Up until recently, tourism was almost non-existent but now buses fill the parking space. There are the expected wares of leather, pottery and produce and dromedaries.

Shopping isn’t the mainreason most travellers come to Douz. Sure, I overhear serious hagglers doing what guidebooks suggest, bargaining. However, the merchants are no pushovers and stay very close to asking price. But even then, everything is inexpensive by comparison to the larger cities. At this time of the year, (early spring), Douz is just a pit stop for most tourists. However, in December there’s the Sahara Festival, which includes the largest traditional folkloric shows and camel races. Above all, Douz is “the gateway to the Sahara”. 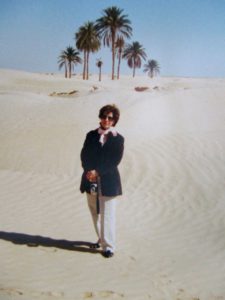 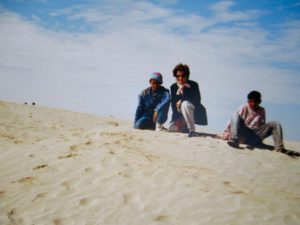 I have always dreamt of playing in this huge sandbox, and now I’m holding ecru colored sand, which is so fine, it just seeps through my fingers. Sittings on one of the dunes are two young boys who are totally amused at my excitement. They smile sweetly and are delighted that I want to take their picture. I let them take mine, which excites them even more.
The fine sand quickly changes into a coarser grain as we continue walking into the desert but then changes again to the refined as I walk about ¼ mile into this stunning beige meets blue canvas. The desert meets the horizon and little else except for the occasional palm tree and the oddest out of place “fortress”. 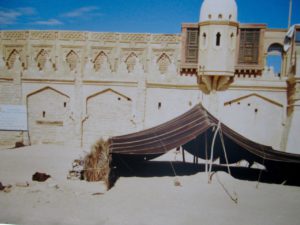 This bizarre building was commissioned for the French movie, Le Ciel Sous Le Desert. I can’t resist seeing it close up. At the entrance of this façade-only development, is a black Berber tent. And nearby, stretched out on the sand under the glowing sun, is the keeper of this structure who is here merely to charge admission of l dinar. I don’t think there are too many takers since nothing exists inside. Standing far off are several camels. They too, are waiting for “passengers” – some who want to camp in the Sahara for an extended time, others who want to hire them for an hour.
Heading east is Matmata, a world so different from anything I have seen. Given the choice with our North American  standards, few would opt to live in a cave even when offered perfectly modern accommodations. But Matmata is unique and filled with cave dwellings, hollowed out of mountains, and still occupied by the inhabitants whose ancestors lived in the exact same location. What looks like giant holes are craters, well-hidden dwellings, naturally cool in the summer and warm in the winter. 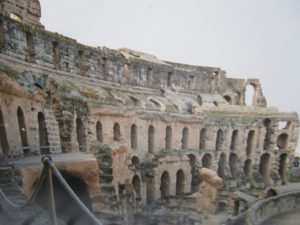 We stop at a one not visible from the road. An arch is the only sign there is something else behind and below. One family – grandmother, son, daughter-in-law and their young school age boys, greet me. I expect to see low dark rooms but instead I’m surprised at the large spaces. Each is high and dark but since the doors are opened, the lights shine in.

I’m taken into their kitchen. A stove, tables, chairs, pots and the necessary utensils hand neatly. To get to other rooms, I must walk outside into the central courtyard, which then lead to bedrooms.
My hostess, in a wonderful traditional blue dress, has heavily henna colored hair and blue tattooing on her face. She’s keen to show me the storage room where there are vats of olive oils and other preserves. When I ask her daughter-in-law why she doesn’t have the tribal tattooing, she tells me she’s more modern. I’m not at all surprised to learn that director, Steven Spielberg used this landscape for Star Wars and Raiders of the Lost Ark. 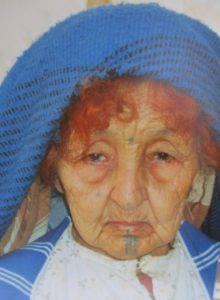 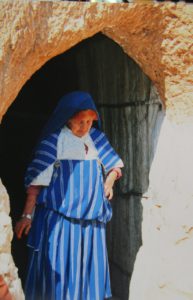 As I leave I think there must be something very healthy in this lifestyle since the inhabitants are known for their longevity.
Usually a 90-minute wait in a queue for a ferry would be an exercise in patience. But here at Jorf, the ferry crossing from the mainland to the island of Djerba, there’s a festive atmosphere. I enter a restaurant looking for film and realize I’m in a men-only eatery. There’re pleasant, curious and polite but I feel uncomfortable and quickly leave for a smaller kiosk sitting up on a hill. The tiny terrace is filled with commuters who have stopped for a smoke , coffee or mint tea. Unfortunately, it’s not a picturesque location so I opt for a seat back in the car.
It’s dark when we arrive at the Hotel Midouin and leave the sightseeing until morning. Our first stop is a causeway at El Kantara, a 7-kilometre road, which the Carthaginians originally created. I cross from one side of the historic road to the other, look at some boats and see little else. But I’m aware that I’m standing on an historic site. 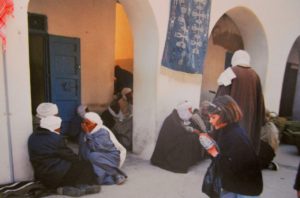 If for no other reason than its color and charm, I visit Guellala on the island’s south coast know for mass produced pottery. At one of the many stores, a potter sits on a riser creating works while the tourists watch. The ‘schpiel’ is to make you buy from this particular merchant. Instead, I walk outside to watch some graceful local women wearing the island trademark – a traditional small brimmed straw-hat and large white shawl-like wraps.

One of the great attractions on this island of 120,000 inhabitants, is the synagogue, El Ghriba, in Hara Sghira. 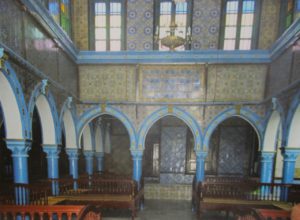 Records show that the first Jews arrived in 566 BC and were very much part of the fabric of this area. Most of the Jewish population have moved out of the country and their numbers have dwindled to a mere 1000. El Ghriba, a small but impressive building built in 1920, with white and yellow tiled walls, carved wood paneling and a renowned history, has tourists flowing off several buses. However, the rabbi tells me, that many don’t even know the significance of the oldest synagogue in North Africa.

When we reach Houmat Souk, the capital of Djerba, and about 30 minutes from Hara Sghira, I’m grateful that I hadn’t bought any pottery before. The variety here is better, the cost almost half. Stretched out on the entire main square is a most unique and colorful display of various wares. I walk past other small booths selling clothing on my way to a small opened-sided building where four are men seated in separate niches, auctioning fish. The morning catch today, is plentiful and the bidding keen. The lucky winner pays immediately and takes his cache on a rope, often heading to another niche for more. Most are restaurant owners. 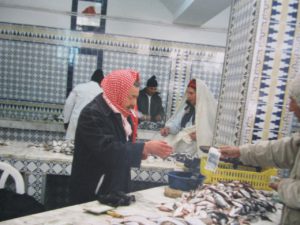 Since this is definitely a fishing area, hard to overlook since there is a marine odor in the air, I eat lunch in Haroun, the harbour of Houmt Souk. Harrissa (strong pepper sauce),olives and tuna are immediately and always placed on each table before the order is taken. The fresh catch of the day is daurade, which I order, grilled. also a glass of Tunisian crisp cool white wine. I drink to this marvellous country.
Driving around the island doesn’t take more than a few hours, but the history, the sights, the smell, the food sand, sea and sports makes Djerba an idyllic and memorable paradise. 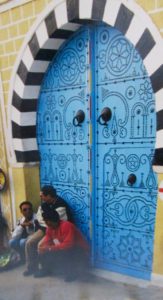 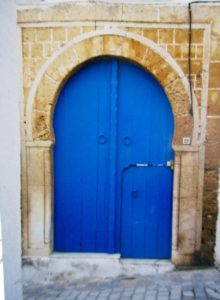 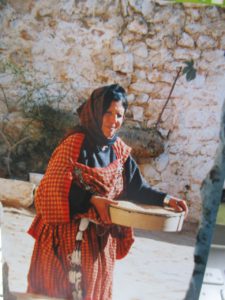 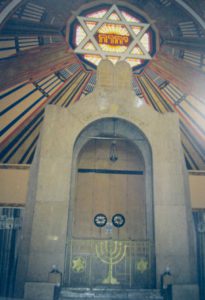 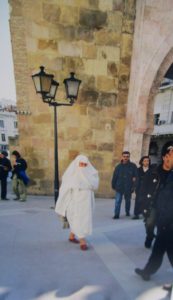 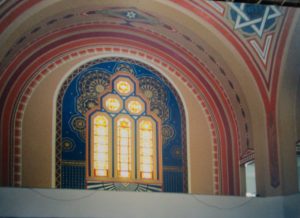