You can’t escape it. Modern technology is everywhere. Even jewelry designer, Virginia- based, Jason McLeod, declares his affinity and inspiration about technology. “My designs are definitely inspired and based on technology.  In many ways it’s the network of information and exchange in this day and age which makes what I do possible, more than  one particular tool or technique,’” says the Alaskan born man.

Once there were a few globally well known jewelry designers, like Cartier,  but their metier was all hand worked. Now there seems to be a plethora of young-ish designers who are so creative and comfortable with the the new ingenious methods that ideas seem to come easily.

But most of what you see and wear by Jason McLeod, hasn’t been touched by a human hand until, well, until the finale. 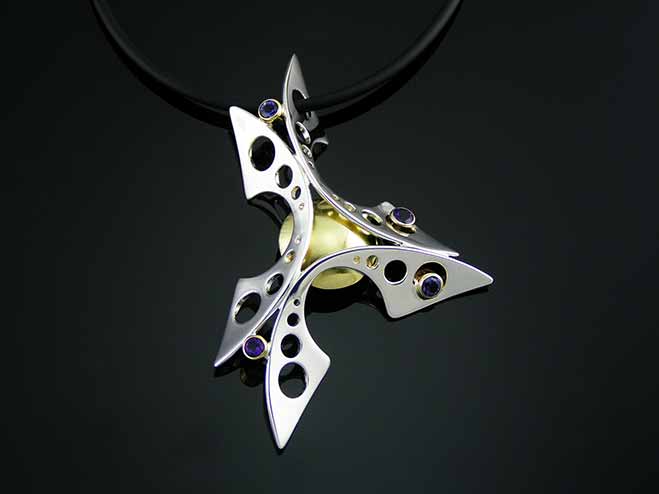 “ I have an atelier and also several jewelry makers who work under my direction and training.  Some of them have metal work experience  and  others help with other aspects. All of us do the finishing and it is one of the most important elements of the work,”  says the self taught and futuristic  suave, very Southern gentleman.

The final process takes time and patience to make the piece look its absolute best before they are  shown  to the clients.

It’s so refreshing NOT to see a big gem stone surrounded with diamonds which could either be a brooch or a pendent and many had matching rings, a ‘parure’, as they used to call these sets.

These were and still are a yawn, and either a lack of  creativity, lack of clients’ judgement or just no inspiration…oh, so boring.

“A lot of what we do in gold and silver smithing is the same as it has been for 10,000 year. “he says sitting back in a reflective mood.  “Feeling the metal with your hands and changing its beauty rather than compromising it, is all part of the attractions.” 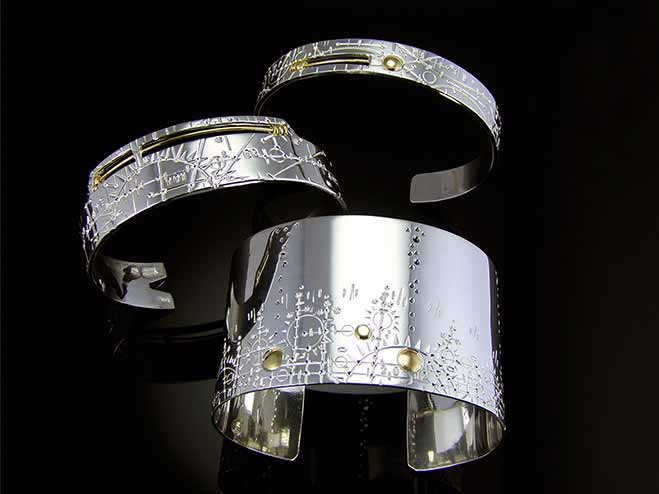 While each of the hundreds of tools are specialized for a particular function,  it’s these tools and information available through various networks that make the design/art  powerful.  “From a rawhide covered mallet that is used in shaping pieces to the diamond coated grinding wheel, each component represents modern and ancient technologies coming together…a great synergy”.

In Mcleod’s varied background, he has a B.A in Political Science.  There was also a time, believe it or not, were there were  gigs a a rock star. And now he is considered a leading star, but not in rock or science  but in  rocks, e.g.. jewelry.  Yes, there’s a nifty flash of frivolity in his designs, and with a gut feeling he knows exactly what Boomers with cash flow, like and want. 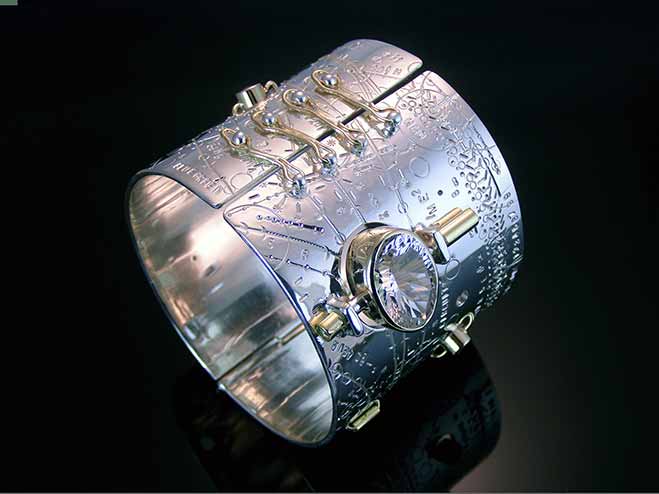 Since 2005 when he was in a most serious car accident  which left him nearly paralyzed and house bound, that started looking through his mother collection of Georg Jensen (one of my mid century favorites) and interestingly, he took great interest in Meissen china, as well as 20th century Mexican contemporaries like Hector Aguilar .  Andy Warhol also play a part as does musician Joe Summer, non jewellers but nevertheless all are sources and inspiration for  his art, career and his company.

It seems these treasures gave him a new meaning and got him back on track.  If there is one word, about his designs  it’s- refreshing.

“Physically I have pretty much recovered from the injuries.  The perspective I have from my experiences have lead my subconscious mind to design and create what you see today.” he says nonchalantly.

Bubbles, one of the newer collections, may be one of the first  unisex collections.  And yes, there is that look of metalwork by technology and oh, so contemporary. 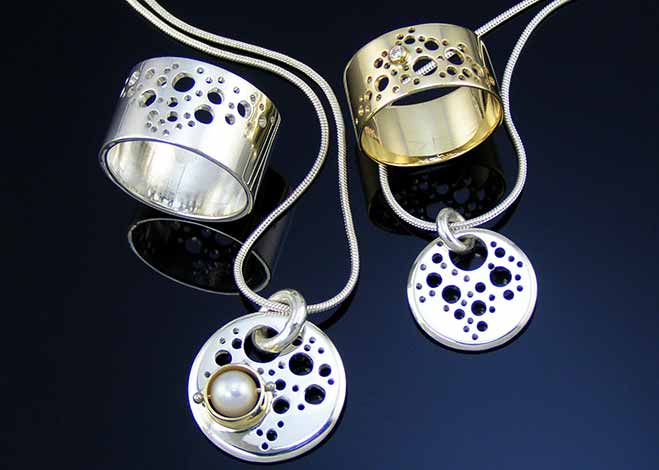 McLeod is also clear that he adores one -of -a -kind items which can be ordered  in 14k , 18k, platinum and  silver which include rings, pendants, cuff links, earrings.  On occasional pieces he places a gemstone or a great pearl which spins in the setting, mounted on tiny golden axels..  They just enhance the clean, simple, elegant lines of the designs.

And interestingly, he has made the major effort that his works can go from daytime casual to dressy evenings.  That alone is a skill..

In Bubbles, less is more  and the perforation in the designs is truly imaginative especially when he happens to drop a pearl  which spin, into one of the holes.

I can see from his works, that there are probably collectors of McLeod’s  designs since they are so ‘today’ but will also always create attention in years to come, much like one of his jewelry heroes Georg Jensen.